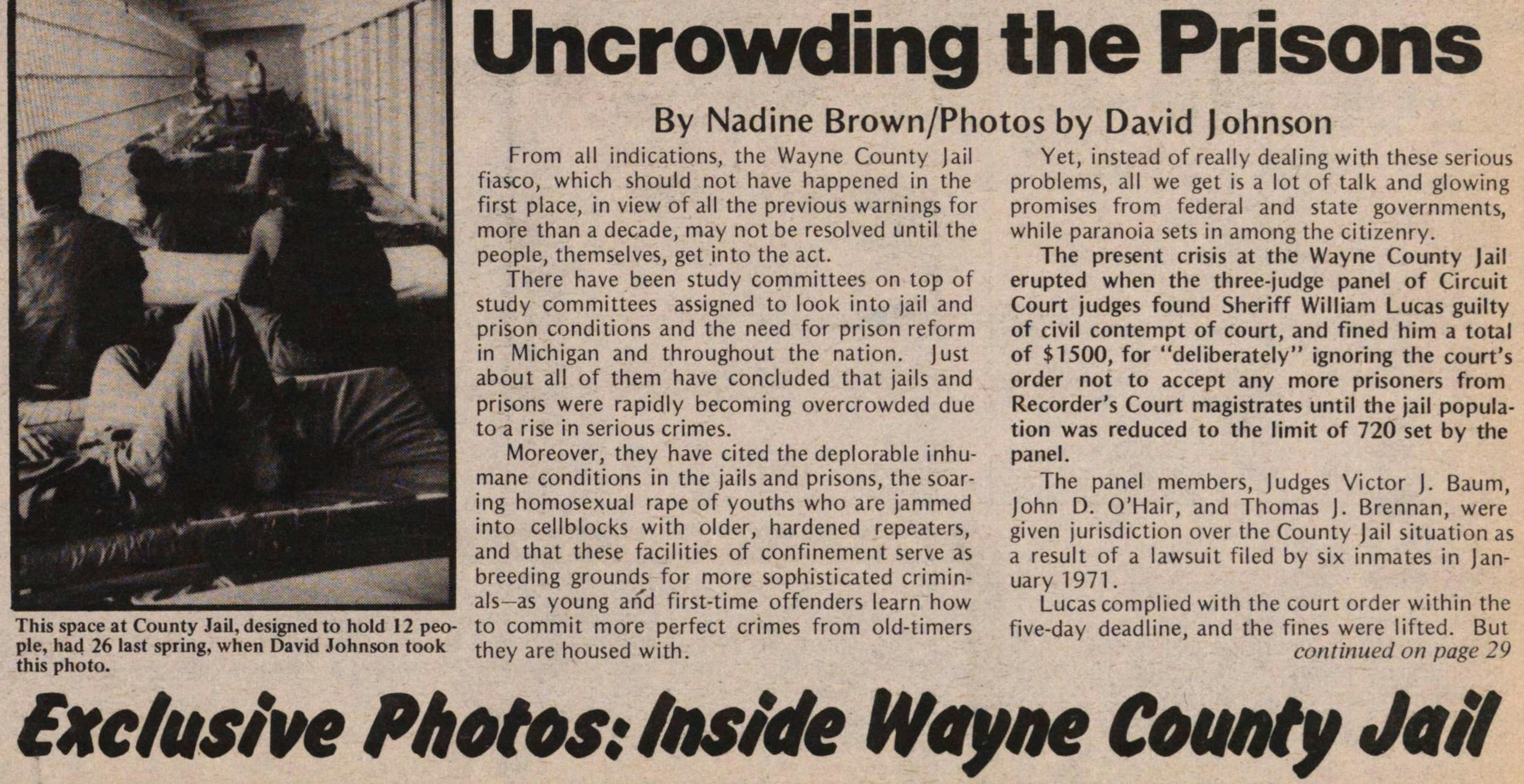 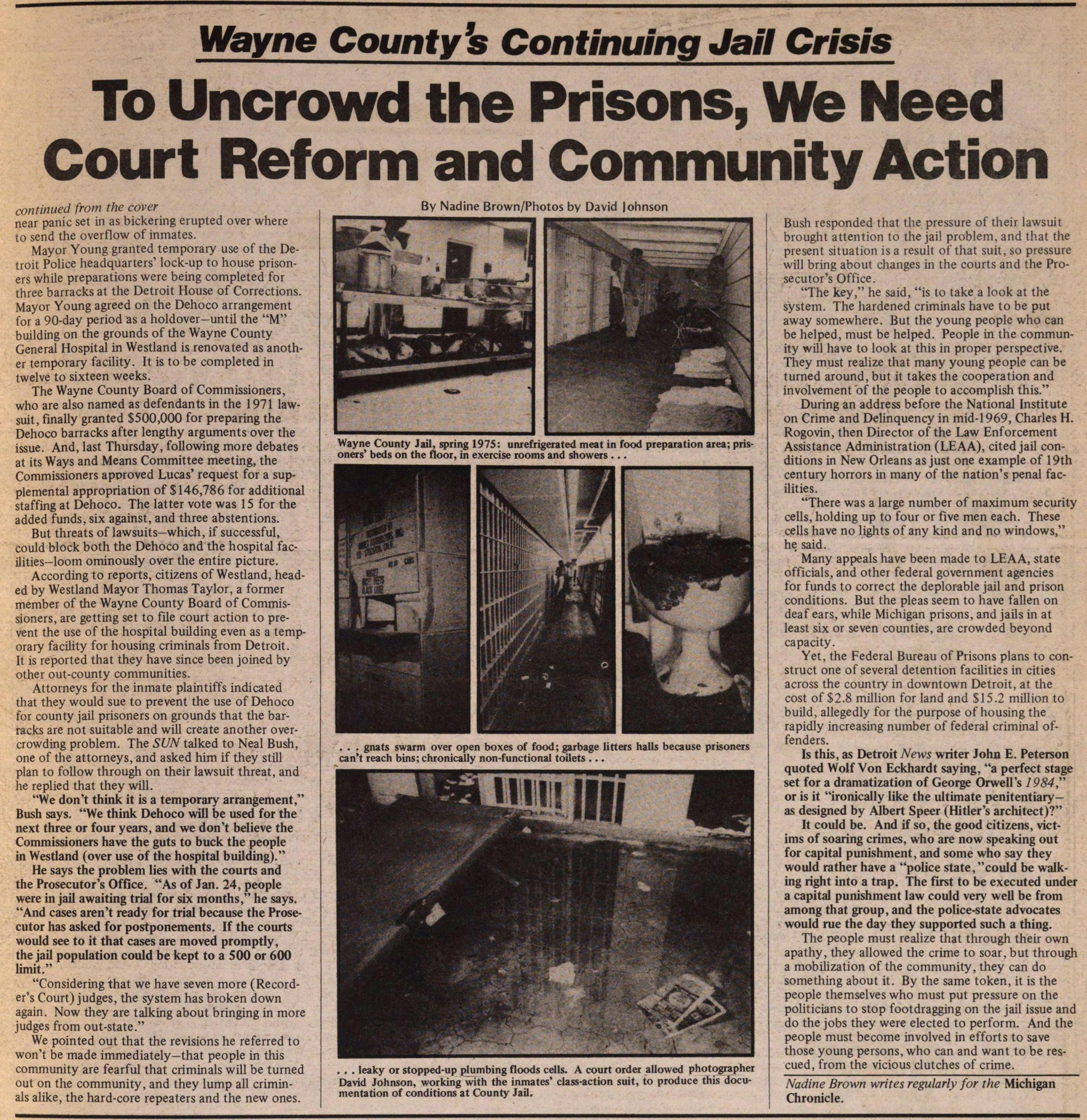 [Image Caption: This space at County Jail, designed to hold 12 people, had 26 last spring when David Johnson took this photo.]

From all indications, the Wayne County Jail fiasco, which should not have happened in the first place, in view of all the previous warnings for more than a decade, may not be resolved until the people, themselves, get into the act.

There have been study committees on top of study committees assigned to look into jail and prison conditions and the need for prison reform in Michigan and throughout the nation. Just about all of them have concluded that jails and prisons were rapidly becoming overcrowded due to a rise in serious crimes.

Moreover, they have cited the deplorable inhumane conditions in the jails and prisons, the soaring homosexual rape of youths who are jammed into cellblocks with older, hardened repeaters, and that these facilities of confinement serve as breeding grounds for more sophisticated criminals - as young and first-time offenders learn how to commit more perfect crimes from old-timers they are housed with.

Yet, instead of really dealing with these serious problems, all we get is a lot of talk and glowing promises from federal and state governments, while paranoia sets in among the citizenry.

The present crisis at the Wayne County Jail erupted when the three-judge panel of Circuit Court judges found Sheriff William Lucas guilty of civil contempt of court, and fined him a total of $1500, for "deliberately" ignoring the court's order not to accept any more prisoners from Recorder's Court magistrates until the jail population was reduced to the limit of 720 set by the panel.

The panel members, Judges Victor J. Baum, John D. O'Hair, and Thomas J. Brennan, were given jurisdiction over the County Jail situation as a result of a lawsuit filed by six inmates in January 1971. Lucas complied with the court order within the five-day deadline, and the fines were lifted. But

To Uncrowd the Prisons, We Need Court Reform and Community Action

near panic set in as bickering erupted over where to send the overflow of inmates.

Mayor Young granted temporary use of the Detroit Police headquarters' lock-up to house prisoners while preparations were being completed for three barracks at the Detroit House of Corrections. Mayor Young agreed on the Dehoco arrangement for a 90-day period as a holdover - until the "M" building on the grounds of the Wayne County General Hospital in Westland is renovated as another temporary facility. It is to be completed in twelve to sixteen weeks.

The Wayne County Board of Commissioners, who are also named as defendants in the 1971 lawsuit, finally granted $500,000 for preparing the Dehoco barracks after lengthy arguments over the issue. And, last Thursday, following more debates at its Ways and Means Committee meeting, the Commissioners approved Lucas' request for a supplemental appropriation of $146,786 for additional staffing at Dehoco. The latter vote was 15 for the added funds, six against, and three abstentions.

But threats of lawsuits - which, if successful, could block both the Dehoco and the hospital facilities - loom ominously over the entire picture.

According to reports, citizens of Westland, headed by Westland Mayor Thomas Taylor, a former member of the Wayne County Board of Commissioners, are getting set to file court action to prevent the use of the hospital building even as a temporary facility for housing criminals from Detroit. It is reported that they have since been joined by other out-county communities.

Attorneys for the inmate plaintiffs indicated that they would sue to prevent the use of Dehoco for county jail prisoners on grounds that the barracks are not suitable and will create another overcrowding problem. The SUN talked to Neal Bush, one of the attorneys, and asked him if they still plan to follow through on their lawsuit threat, and he replied that they will.

"We don't think it is a temporary arrangement," Bush says. "We think Dehoco will be used for the next three or four years, and we don't believe the Commissioners have the guts to buck the people in Westland (over use of the hospital building)."

He says the problem lies with the courts and the Prosecutor's Office. "As of Jan. 24, people were in jail awaiting trial for six months," he says. "And cases aren't ready for trial because the Prosecutor has asked for postponements. If the courts would see to it that cases are moved promptly, the jail population could be kept to a 500 or 600 limit."

"Considering that we have seven more (Recorder's Court) judges, the system has broken down again. Now they are talking about bringing in more judges from out-state."

We pointed out that the revisions he referred to won't be made immediately - that people in this community are fearful that criminals will be turned out on the community, and they lump all criminals alike, the hard-core repeaters and the new ones.

Bush responded that the pressure of their lawsuit brought attention to the jail problem, and that the present situation is a result of that suit, so pressure will bring about changes in the courts and the Prosecutor's Office.

"The key," he said, "is to take a look at the system. The hardened criminals have to be put away somewhere. But the young people who can be helped, must be helped. People in the community will have to look at this in proper perspective. They must realize that many young people can be turned around, but it takes the cooperation and involvement of the people to accomplish this."

During an address before the National Institute on Crime and Delinquency in mid-1969, Charles H. Rogovin, then Director of the Law Enforcement Assistance Administration (LEAA), cited jail conditions in New Orleans as just one example of 19th century horrors in many of the nation's penal facilities.

"There was a large number of maximum security cells, holding up to four or five men each. These cells have no lights of any kind and no windows," he said.

Many appeals have been made to LEAA, state officials, and other federal government agencies for funds to correct the deplorable jail and prison conditions. But the pleas seem to have fallen on deaf ears, while Michigan prisons, and jails in at least six or seven counties, are crowded beyond capacity.

Yet, the Federal Bureau of Prisons plans to construct one of several detention facilities in cities across the country in downtown Detroit, at the cost of $2.8 million for land and $15.2 million to build, allegedly for the purpose of housing the rapidly increasing number of federal criminal offenders.

Is this, as Detroit News writer John E. Peterson quoted Wolf Von Eckhardt saying, "a perfect stage set for a dramatization of George Orwell's 1984" or is it "ironically like the ultimate penitentiary - as designed by Albert Speer (Hitler's architect)?"

It could be. And if so, the good citizens, victims of soaring crimes, who are now speaking out for capital punishment, and some who say they would rather have a "police state," could be walking right into a trap. The first to be executed under a capital punishment law could very well be from among that group, and the police-state advocates would rue the day they supported such a thing.

The people must realize that through their own apathy, they allowed the crime to soar, but through a mobilization of the community, they can do something about it. By the same token, it is the people themselves who must put pressure on the politicians to stop footdragging on the jail issue and do the jobs they were elected to perform. And the people must become involved in efforts to save those young persons, who can and want to be rescued, from the vicious clutches of crime.