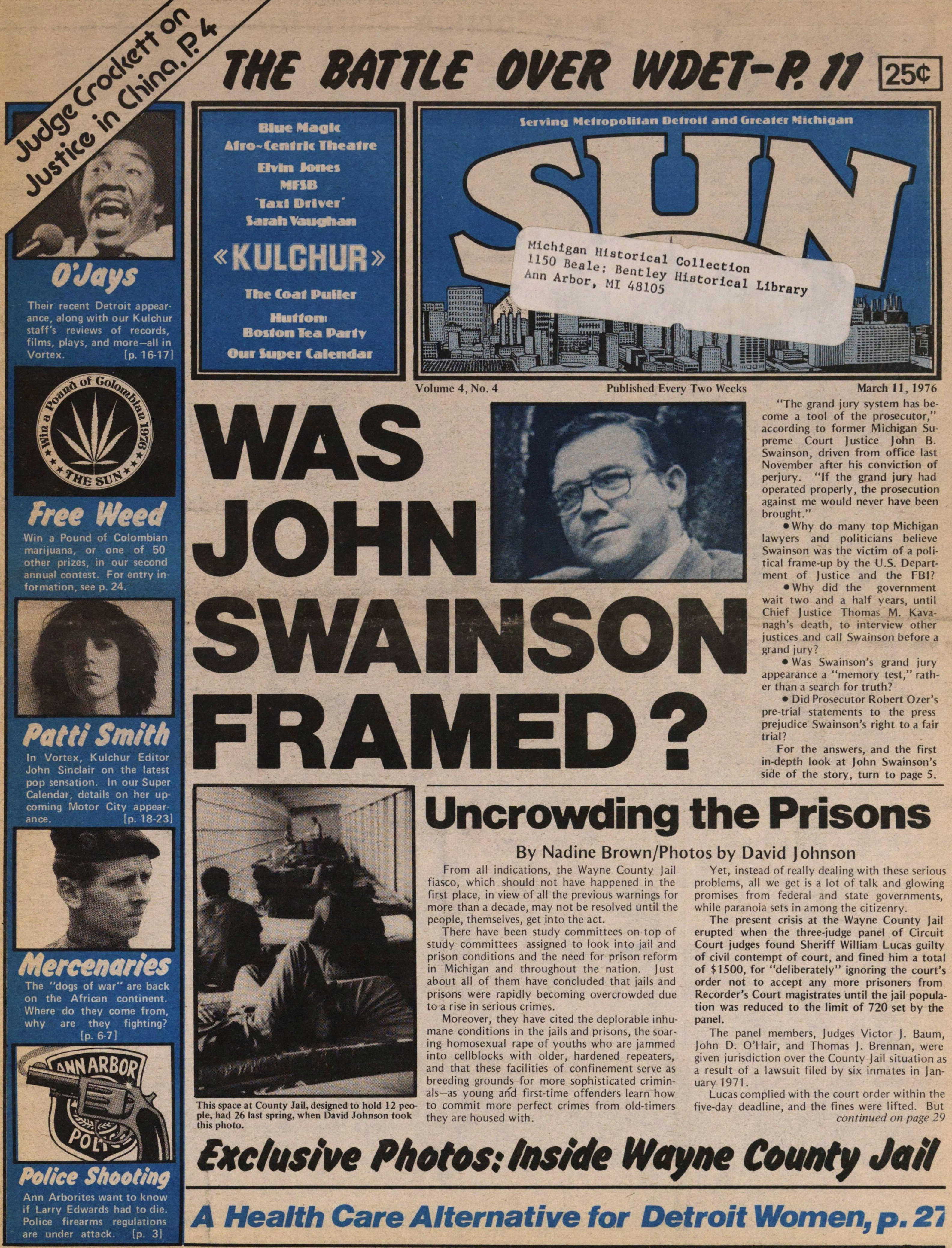 Their recent Detroit appearance, along with our Kulchur staff's reviews of records, films, plays, and more - all in Vortex [p. 16-17]

Win a Pound of Colombian marijuana, or one of 50 other prizes, in our second annual contest. For entry information, see p. 24.

In Vortex, Kulchur Editor John Sinclair on the latest pop sensation. In our Super Calendar, details on her upcoming Motor City appearance. [p. 18-23]

The "dogs of war" are back on the African continent. Where do they come from, why are they fighting? [p. 6-7]

Ann Arborites want to know if Larry Edwards had to die. Police firearms regulations are under attack. [p. 3]

"The grand jury system has become a tool of the prosecutor," according to former Michigan Supreme Court Justice John B. Swainson, driven from office last November after his conviction of perjury. "If the grand jury had operated properly, the prosecution against me would never have been brought."

For the answers, and the first in-depth look at John Swainson's side of the story, turn to page 5.

[Image Caption: This space at County Jail, designed to hold 12 people, had 26 last spring when David Johnson took this photo.]

From all indications, the Wayne County Jail fiasco, which should not have happened in the first place, in view of all the previous warnings for more than a decade, may not be resolved until the people, themselves, get into the act.

There have been study committees on top of study committees assigned to look into jail and prison conditions and the need for prison reform in Michigan and throughout the nation. Just about all of them have concluded that jails and prisons were rapidly becoming overcrowded due to a rise in serious crimes.

Moreover, they have cited the deplorable inhumane conditions in the jails and prisons, the soaring homosexual rape of youths who are jammed into cellblocks with older, hardened repeaters, and that these facilities of confinement serve as breeding grounds for more sophisticated criminals - as young and first-time offenders learn how to commit more perfect crimes from old-timers they are housed with.

Yet, instead of really dealing with these serious problems, all we get is a lot of talk and glowing promises from federal and state governments, while paranoia sets in among the citizenry.

The present crisis at the Wayne County Jail erupted when the three-judge panel of Circuit Court judges found Sheriff William Lucas guilty of civil contempt of court, and fined him a total of $1500, for "deliberately" ignoring the court's order not to accept any more prisoners from Recorder's Court magistrates until the jail population was reduced to the limit of 720 set by the panel.

The panel members, Judges Victor J. Baum, John D. O'Hair, and Thomas J. Brennan, were given jurisdiction over the County Jail situation as a result of a lawsuit filed by six inmates in January 1971. Lucas complied with the court order within the five-day deadline, and the fines were lifted. But