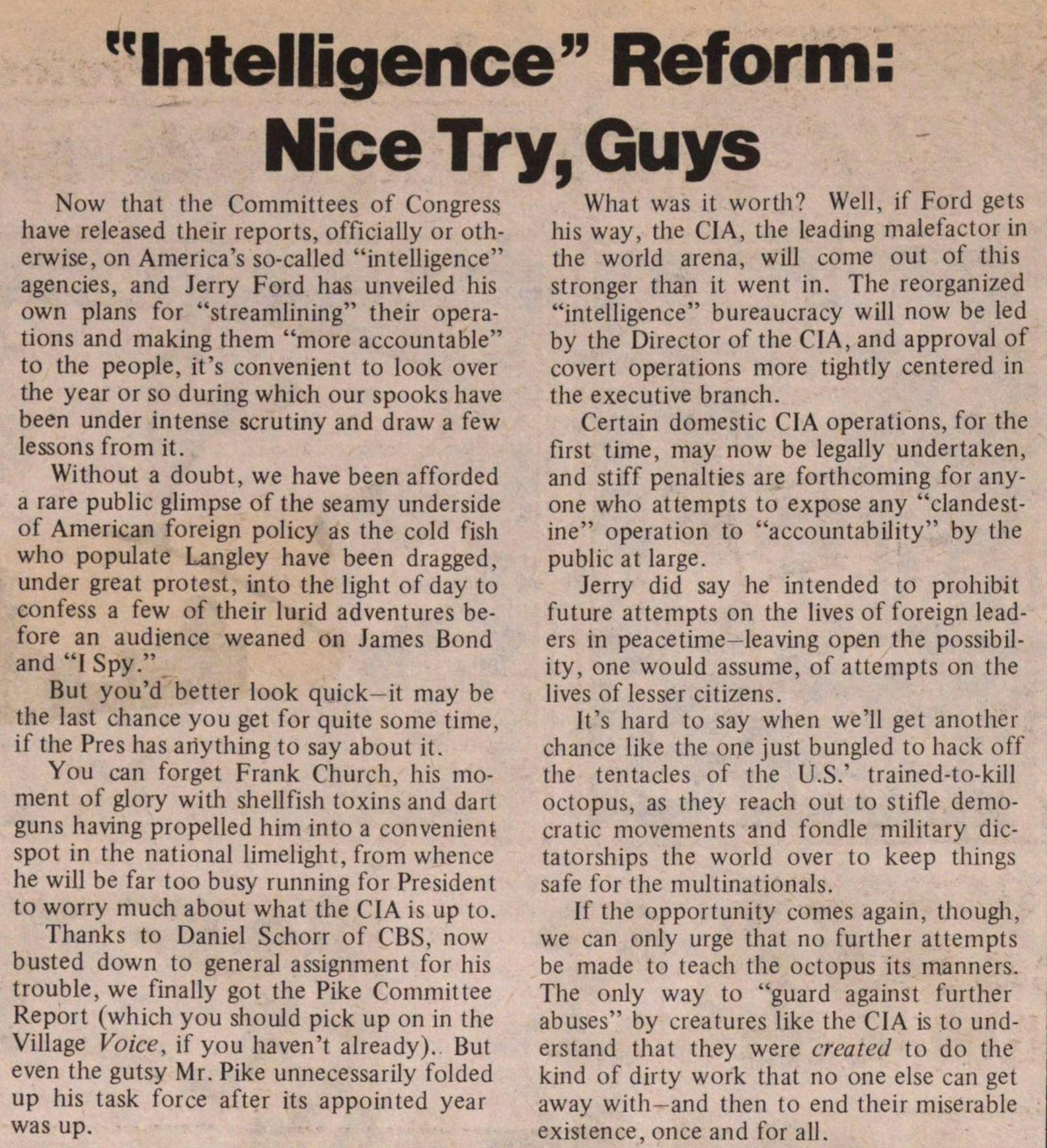 Now that the Committees of Congress have released their reports, officially or otherwise, on America's so-called "intelligence" agencies, and Jerry Ford has unveiled his own plans for "streamlining" their operations and making them "more accountable" to the people, it's convenient to look over the year or so during which our spooks have been under intense scrutiny and draw a few lessons from it.

Without a doubt, we have been afforded a rare public glimpse of the seamy underside of American foreign policy as the cold fish who populate Langley have been dragged, under great protest, into the light of day to confess a few of their lurid adventures before an audience weaned on James Bond and "I Spy."

But you'd better look quick-it may be the last chance you get for quite some time, if the Pres has anything to say about it.

You can forget Frank Church, his moment of glory with shellfish toxins and dart guns having propelled him into a convenient spot in the national limelight, from whence he will be far too busy running for President to worry much about what the CIA is up to.

Thanks to Daniel Schorr of CBS, now busted down to general assignment for his trouble, we finally got the Pike Committee Report (which you should pick up on in the Village Voice, if you haven't already). But even the gutsy Mr. Pike unnecessarily folded up his task force after its appointed year was up.

What was it worth? Well, if Ford gets his way, the CIA, the leading malefactor in the world arena, will come out of this stronger than it went in. The reorganized "intelligence" bureaucracy will now be led by the Director of the CIA, and approval of covert operations more tightly centered in the executive branch.

Certain domestic CIA operations, for the first time, may now be legally undertaken, and stiff penalties are forthcoming for anyone who attempts to exposé any "clandestine" operation to "accountability" by the public at large.

It's hard to say when we'll get another chance like the one just bungled to hack off the tentacles of the U.S.' trained-to-kill octopus, as they reach out to stifle democratic movements and fondle military dictatorships the world over to keep things safe for the multinationals.

If the opportunity comes again, though, we can only urge that no further attempts be made to teach the octopus its manners. The only way to "guard against further abuses" by creatures like the CIA is to understand that they were created to do the kind of dirty work that no one else can get away with-and then to end their miserable existence, once and for all.