An Attack On Freedom Of The Press 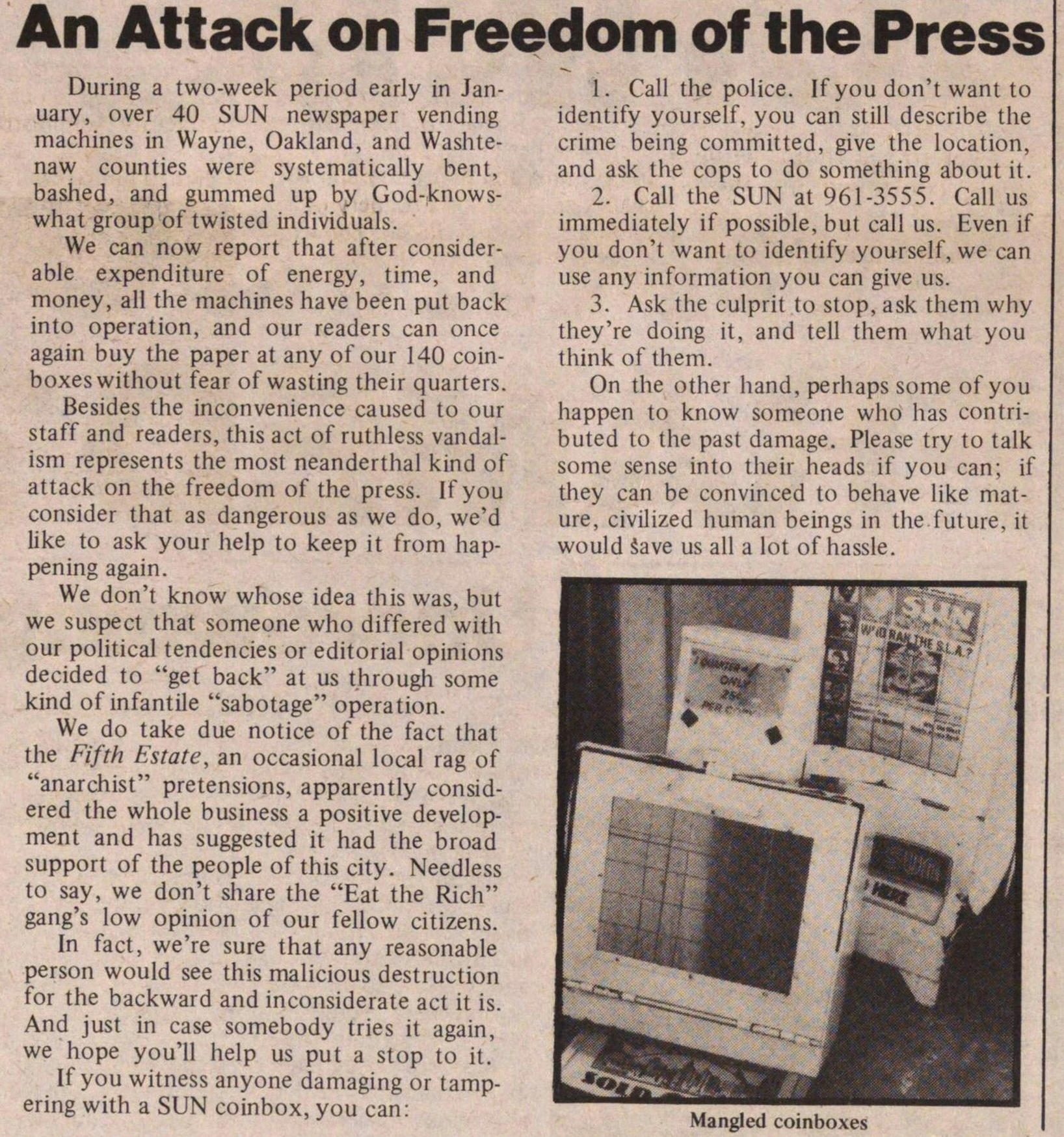 During a two-week period early in January, over 40 SUN newspaper vending machines in Wayne, Oakland, and Washtenaw counties were systematically bent, bashed, and gummed up by God-knows-what group of twisted individuals.

We can now report that after considerable expenditure of energy, time, and money, all the machines have been put back into operation, and our readers can once again buy the paper at any of our 140 coin boxes without fear of wasting their quarters.

Besides the inconvenience caused to our staff and readers, this act of ruthless vandalism represents the most neanderthal kind of attack on the freedom of the press. If you consider that as dangerous as we do, we'd like to ask your help to keep it from happening again.

We don't know whose idea this was, but we suspect that someone who differed with our political tendencies or editorial opinions decided to "get back" at us through some kind of infantile "sabotage" operation.

We do take due notice of the fact that the Fifth Estate, an occasional local rag of "anarchist" pretensions, apparently considered the whole business a positive development and has suggested it had the broad support of the people of this city. Needless to say, we don't share the "Eat the Rich" gang's low opinion of our fellow citizens.

In fact, we're sure that any reasonable person would see this malicious destruction for the backward and inconsiderate act it is. And just in case somebody tries it again, we hope you'll help us put a stop to it.

If you witness anyone damaging or tampering with a SUN coin box, you can: 1. Call the police. If you don't want to identify yourself, you can still describe the crime being committed, give the location, and ask the cops to do something about it. 2. Call the SUN at 961-3555. Call us immediately if possible, but call us. Even if you don't want to identify yourself, we can use any information you can give us. 3. Ask the culprit to stop, ask them why they're doing it, and tell them what you think of them.

On the other hand, perhaps some of you happen to know someone who has contributed to the past damage. Please try to talk some sense into their heads if you can; if they can be convinced to behave like mature, civilized human beings in the future, it would save us all a lot of hassle.