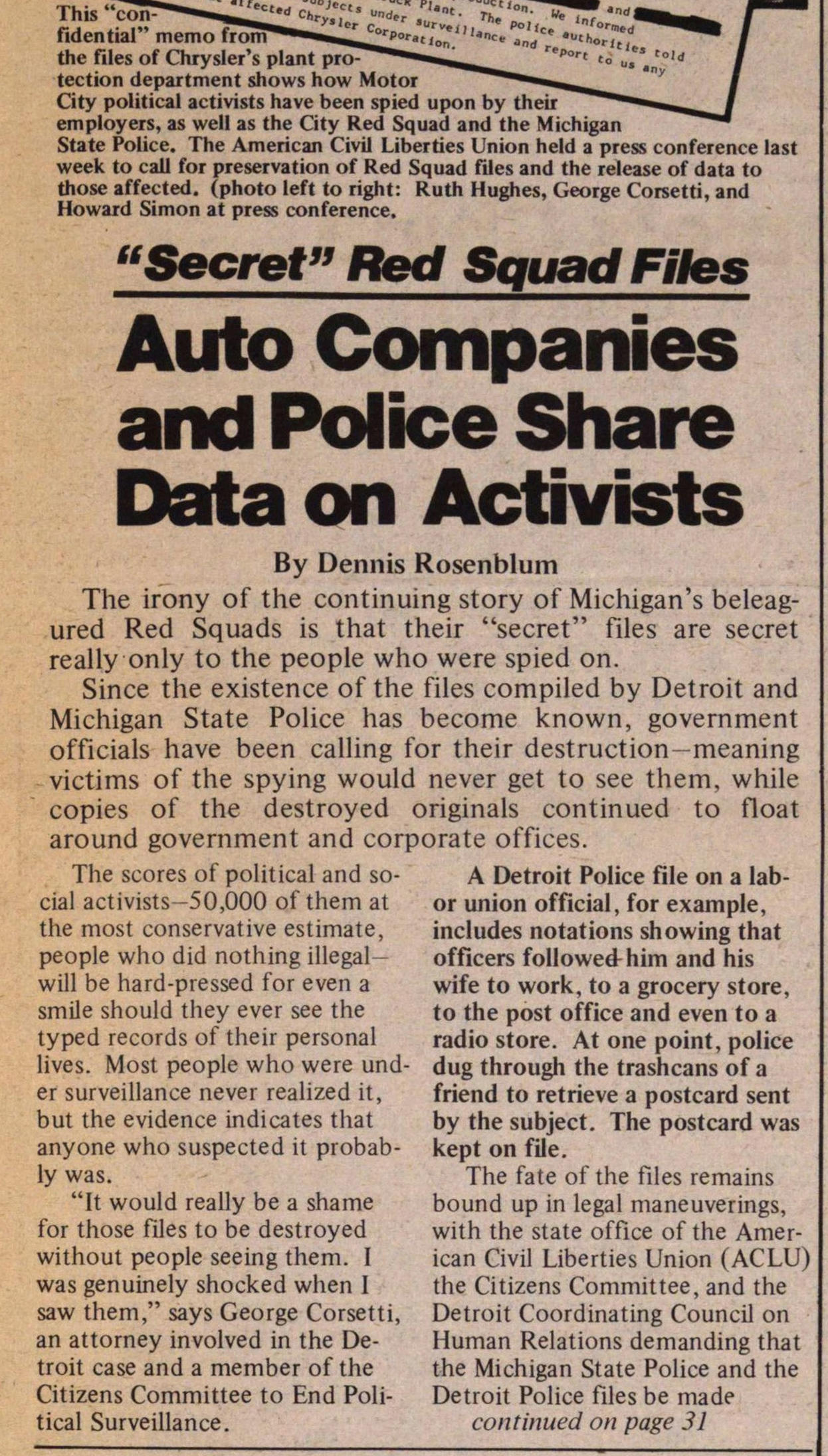 This confidential memo from the files of Chrysler's plant protection department shows how Motor City political activists have been spied upon by their employers, as well as the City Red Squad and the Michigan State Police. The American Civil Liberties Union held a press conference last week to call for preservation of Red Squad files and the release of data to those affected. (photo left to right: Ruth Hughes, George Corsetti, and Howard Simon at press conference

The irony of the continuing story of Michigan's beleaguered Red Squads is that their "secret" files are secret really only to the people who were spied on.

Since the existence of the files compiled by Detroit and Michigan State Police has become known, government officials have been calling for their destruction- meaning victims of the spying would never get to see them, while copies of the destroyed originals continued to float around government and corporate offices.

The scores of political and social activists-50,000 of them at the most conservative estimate, people who did nothing illegal will be hard-pressed for even a smile should they ever see the typed records of their personal lives. Most people who were under surveillance never realized it, but the evidence indicates that anyone who suspected it probably was.

"It would really be a shame for those files to be destroyed without people seeing them. I was genuinely shocked when I saw them," says George Corsetti, an attorney involved in the Detroit case and a member of the Citizens Committee to End Political Surveillance.

A Detroit Police file on a labor union official, for example, includes notations showing that officers followed him and his wife to work, to a grocery store, to the post office and even to a radio store. At one point, police dug through the trashcans of a friend to retrieve a postcard sent by the subject. The postcard was kept on file.

The fate of the files remains bound up in legal maneuverings, with the state office of the American Civil Liberties Union (ACLU), the Citizens Committee, and the Detroit Coordinating Council on Human Relations demanding that the Michigan State Police and the Detroit Police files be made

available to the subjects.

In the latest development, a Lansing judge has ordered all political files kept by the State Police Subversive Activities Investigation Division to be destroyed on March 16. The order by Ingham County Circuit Judge Thomas Brown allows people to see their own files if they can establish "sufficient allegations of injury, damage or need to know."

A class-action suit pending before Wayne County Circuit Judge James Montante, which involves Detroit Police spying, may prevent destruction of the state files next month. The state files are needed for evidence in the Wayne County case, meaning the Governor and the State Police Commander could be held in contempt of court if the records are destroyed- although lawyers fighting for disclosure emphasize that a contempt citation would be meaningless if the files are gone. Attorneys for the state are now asking Montante for permission to go ahead with the scheduled March 16 destruction.

Meanwhile, people who believe they may have been the subject of investigations or harassment by the state Red Squad are being urged to immediately make formal requests to Judge Brown in Ingham County to view their files. Detailed instructions and sample forms necessary to request a court hearing are available free by sending a stamped, self-addressed envelope to the ACLU, 808 Washington Boulevard Building, 234 State St., Detroit, MI 48226.

"There is no excuse for law enforcement agencies to invade privacy and constitutional rights by infiltrating political organizations not connected with any criminal investigation, or to photograph participants in lawful demonstrations, or to compile non-criminal dossiers on thousands of citizens who publicly support almost any political cause, including tidbits on their personal lives as well as their political views," comments Howard Simon, Executive Director of the Michigan ACLU. "All citizens have an interest in how surveillance operates."

Continuing investigations in Lansing and Detroit show a sordid history of police spying, or infiltration and harassment of a variety of organizations- including women's, gay rights and environmental groups- and of collusion between Detroit Police and corporate officials in an apparent attempt to keep radicals out of auto plants.

Mayor Young ordered Detroit political surveillance activity stopped after taking office, and says he and his staff have never asked for any information available in the files.

Corsetti, however, believes that some political activity is continuing by the police. "Their position is that these groups (under surveillance) are involved in possible criminal activity," he says.

"We contend they're covered by the Constitution. Cases back to '61 say this kind of activity is unconstitutional. In that sense, this would seem to have restricted their activity all along."

Detroit Police Chief Philip Tannian, in a City Council hearing last f all, defended police surveillance of political activists as a legitimate activity in crime prevention. Many organizations, he said in September, "were trying to use the first amendment as a political cover to achieve unlawful ends through unlawful means."

Investigation by Corsetti and others revealed that the Detroit Police had a group of about four people, known as the Subversive Unit, formed in the 1930's. It was responsible for keeping tabs on what would now be termed the "old" left. In the late 1960's, police "officials discovered their existing unit was unable to provide information on the emerging "new" left, so a second group, called the Demonstration Detail, was formed. It had an assignment of 50 to 55 officers at its peak, with a budget of $1000 a month for informants.

Both units were part of the departments Criminal Intelligence Bureau and reported to the same commanding officer, but maintained separate sets of records and even competed with each other for information. The two groups were eventually merged into the present Reconnaissance Unit after the head of the Subversive Unit retired.

The spies watched groups and individuals on the left and right of the political spectrum, although Corsetti says probably 90 per cent of their effort was directed at the left.

'They were watching black and white groups, radicals, environmental and consumer groups, even traditional civil rights groups. We've seen that they're involved in gay rights, women's groups. They used information to harass and intimidate people," he says. "People on the left just assumed this went on. But this is the evidence." Police agents have more recently watched people involved in busing and unemployment.

Another set of reports was kept by the Chrysler Corp. plant protection department, headed by former police undercover agents, which has operated in close concert with Detroit Police.

"They even admitted they got much of their information from Detroit Police and the FBI," says Corsetti. "The police would just give them wholesale reports. We're just starting to get into how they used this information."

In a separate case now in arbitration, an auto worker was fired by the Ford Motor Co. when they discovered he had been a plant organizer while at Chrysler. General Baker, an organizer for the Dodge Revolutionary Union Movement (DRUM) and the League of Revolutionary Black Workers, was fired from Chrysler in 1968. He later got a job at Ford, but was fired after 19 months when his Chrysler activity was discovered.

"They admitted they fired him when they found out who he was," says Ron Glotta, Baker's attorney. "He's been blacklisted in the city of Detroit."

According to Zolton Ferency, who originally brought the suit against the State Police when he was running for Governor on the Human Rights Party ticket in 1974, Judges Brown and Montante conferred on the question of releasing surveillance files and decided against it. "It's open to appeal," he says, "and I would support it."

Ferency says Brown cited three reasons for keeping files under wraps- that they include much unsubstantiated gossip and rumor, that their release may violate the privacy of people mentioned, and that their release may jeopardize informants. Another concern is that thousands of people on whom files were kept would bring suits against the state and the city of Detroit for damages.

Mayor Young has said he wants the Detroit Red Squad files destroyed; his main fear is that the already-indebted city treasury could be seriously hurt by citizens' lawsuits.

State Rep. Perry Bullard's House committee investigating the activities of the state Red Squad has continued to hold hearings. Bullard is one of those pressing for easy access to the files. "We will have to prevent the records from being destroyed," says Bullard. "A citizen has a right to see his or her own record to attempt to overcome any problem created by it. That's the problem with secret records- they're only secret from the people they're kept on."

Dennis Rosenblum, a former Detroit News reporter, is a free-lance writer who lives in the city.