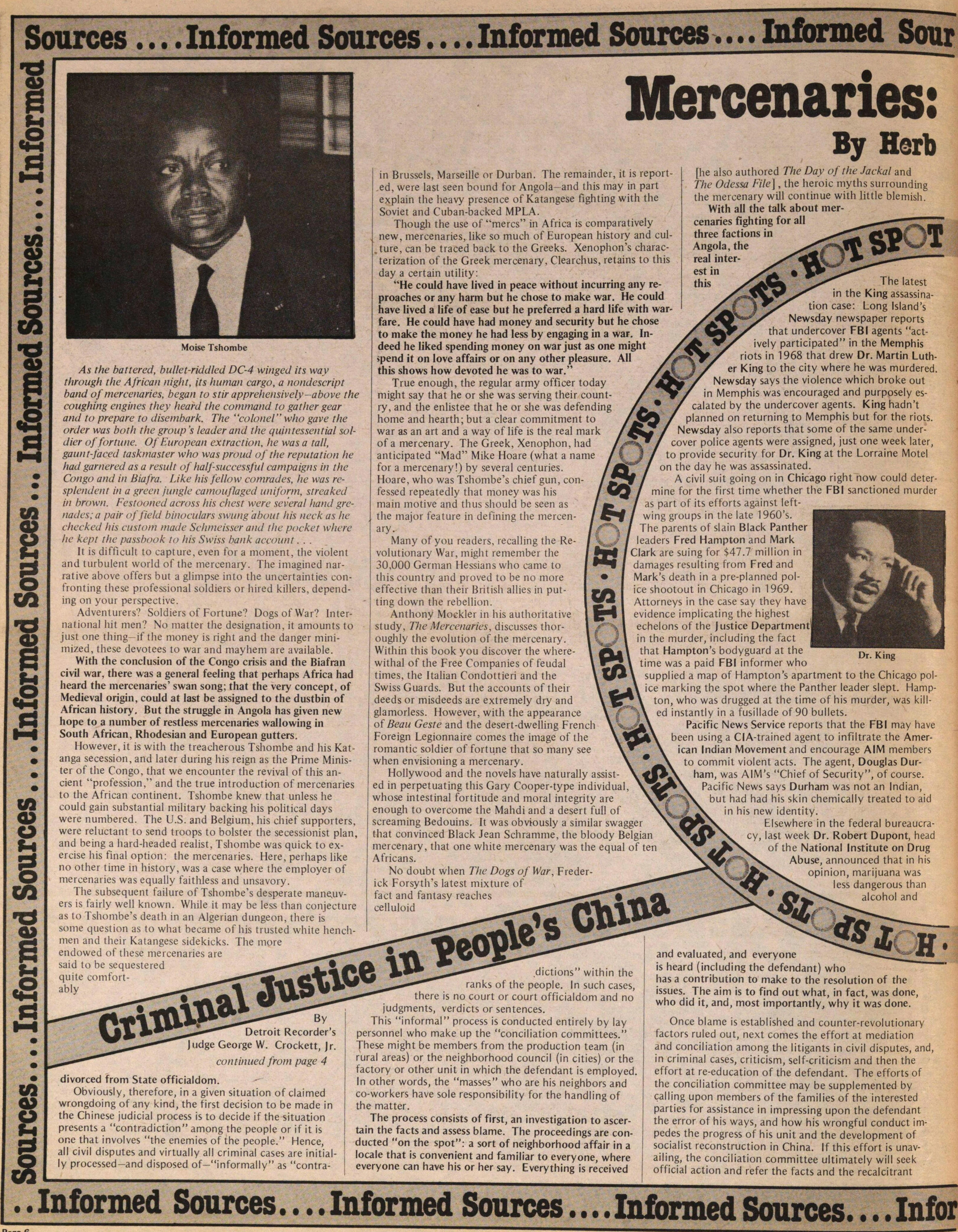 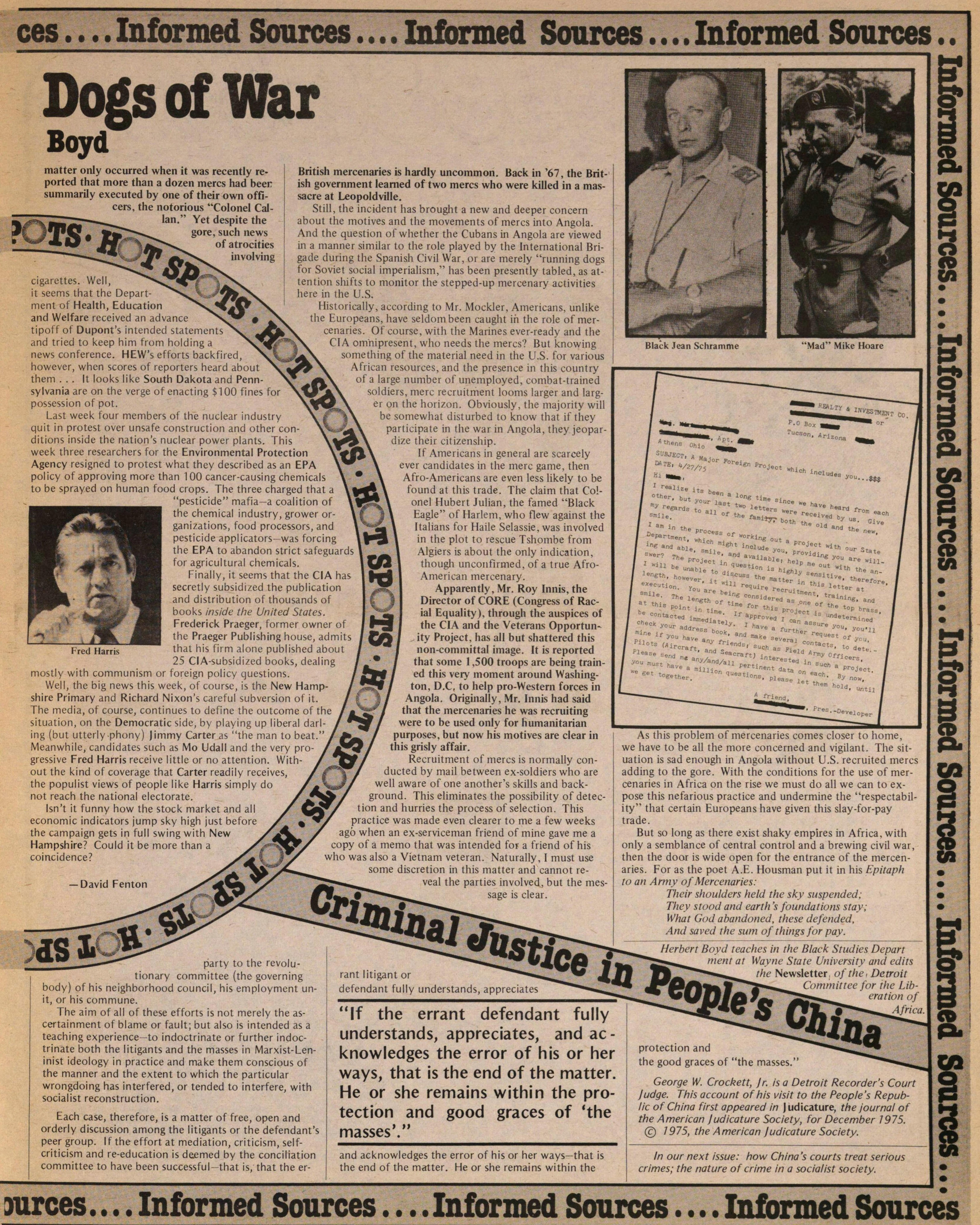 As the battered, bullet-riddled DC-4 winged its way through the African night, its human cargo, a nondescript band of mercenaries, began to stir apprehensively-above the coughing engines they heard the command to gather gear and to prepare to disembark, The "colonel" who gave the order was both the group 's leader and the quintessential soldier of fortune. Of European extraction, he was a tall, gaunt-faced taskmaster who was proud of the reputation he had garnered as a result of half-successful campaigns in the Congo and in Biafra. Like his fellow comrades, he was resplendent in a green jungle camouflaged uniform, streaked in brown. Festooned across his chest were severa! hand grenades; a pair of field binoculars swung about his neck as he checked his custom made Schmeisser and the pocket where he kept the passbook to his Swiss bank account...

It is difficult to capture, even for a moment, the violent and turbulent world of the mereenary. The imagined narrative above offers but a glimpse into the uncertainties confronting these professional soldiers or hired killers, depending on your perspective.

Adventurers? Soldiers of Fortune? Dogs of War? International hit men? No matter the designation, it amounts to just one thing-if the money is right and the danger minimized, these devotees to war and mayhem are available.

With the conclusion of the Congo crisis and the Biafran civil war, there was a general feeling that perhaps Africa had heard the mercenaries' swan song; that the very concept, of Medieval origin, could at last be assigned to the dustbin of African history. But the struggle in Angola has given new hope to a number of restless mercenaries wallowing in South African, Rhodesian and European gutters.

However, it is with the treaeherous Tshombe and his Katanga secession, and later during his reign as the Prime Minister of the Congo, that we encounter the revival of this ancient "profession," and the true introduction of mercenaries to the African continent. Tshombe knew that unless he could gain substantial military backing his political days were numbered. The U.S. and Belgium, his chief supporters, were reluctant to send troops to bolster the secessionist plan, and being a hard-headed realist, Tshombe was quick to exercise his final option: the mercenaries. Here, perhaps like no other time in history, was a case where the employer of mercenaries was equally faithless and unsavory.

The subsequent failure of Tshombe's desperate mancuvers is fairly well known. While it may be less than conjecture as to Tshombe's death in an Algerian dungeon, there is some question as to what became of his trusted white henchmen and their Kataneese sidekicks. The more endowed of these mercenaries are said to be sequestered quite comfortably in Brussels, Marseille or Durban. The remainder, it is reported, were last seen bound for Angola-and this may in part explain the heavy presence of Katangese fighting with the Soviet and Cuban-backed MPLA.

Though the use of "mercs" in Africa is comparatively new, mercenaries, like so much of European history and culture, can be traced back to the Greeks. Xenophon's characterization of the Greek mercenary, Clearchus, retains to this day a certain utility:

True enough, the regular army officer today might say that he or she was serving their country, and the enlistee that he or she was defending home and hearth; but a clear commitment to war as an art and a way of life is the real mark of a mercenary. The Greek, Xenophon, had anticipated "Mad" Mike Hoare (what a name for a mercenary!) by several centuries. Hoare, who was Tshombe's chief gun, confessed repeatedly that money was his main motive and thus should be seen as the major feature in defining the mercenary.

Many of you readers, recalling the revolutionary War, might remember the 30,000 German Hessians who came to this country and proved to be no more effective than their British allies in putting down the rebellion.

Anthony Mockler in his authoritative study, The Mercenaries, discusses thoroughly the evolution of the mercenary. Within this book you discover the wherewithal of the Free Companies of feudal times, the Italian Condottieri and the Swiss Guards. But the accounts of their deeds or misdeeds are extremely dry and glamorless. However, with the appearance of Beau Geste and the desert-dwelling French Foreign Legionnaire comes the image of the romantic soldier of fortune that so many see when envisioning a mercenary.

Hollywood and the novels have naturally assisted in perpetuating this Gary Cooper-type individual, whose intestinal fortitude and moral integrity are enough to overcome the Mahdi and a desert full of screaming Bedouins. It was obviously a similar swagger that convinced Black Jean Schramme, the bloody Belgian mercenary, that one white mercenary was the equal of ten Africans.

No doubt when The Dogs of War, Frederick Forsyth's latest mixture of fact and fantasy reaches celluloid [he also authored The Day of the Jackal and The Odessa File], the heroic myths surrounding the mercenary will continue with little blemish.

With all the talk about mercenaries fighting for all three factions in Angola, the real interest in this matter only occurred when it was recently reported that more than a dozen mercs had beer summarily executed by one of their own officers, the notorious "Colonel Calan. Yet despite the gore, such news of atrocities involving Brítish mercenaries is hardly uncommon. Back in '67, the British government leamed of two mercs who were killed in a massacre at Leopoldville.

Still, the incident has brought a new and deeper concern about the motives and the movements of mercs into Angola. And the question of whether the Cubans in Angola are viewed in a manner similar to the role played by the International Brigade during the Spanish Civil War, or are merely "running dogs for Soviet social imperialism," has been presently tabled, as attention shifts to monitor the stepped-up mercenary activities here in the U.S.

Historically, according to Mr. Mockler, Americans, unlike the Europeans, have seldombeen caught in the role of mercenaries. Of course, with the Marines ever-ready and the CIA omnipresent, who needs the mercs? But knowing something of the material need in the U.S. for various Arncan resources, and the presence in this country of a large number of unemployed, combat-trained soldiers, mere recruitment looms larger and larger on the horizon. Obviously, the majority will be somewhat disturbed to know that if they particípate in the war in Angola, they jeopardize their citizenship.

If Americans in general are scarcely ever candidates in the mere game, then Afro-Americans are even less likely to be found at this trade. The claim that Colonel Hubert Julian, the famed "Black Eagle" of Harlem, who flew against the Italians for Haile Selassie, was involved in the plot to rescue Tshombe from Algiers is about the only indication, though unconfirmed, of a true AfroAmerican mercenary.

Apparently, Mr. Roy Innis, the Director of CORE (Congress of Racial Equality), through the auspices of the CIA and the Veterans Opportunity Project, has all but shattered this non-committal image. It is reported that some 1,500 troops are being trained this very moment around Washington, D.C. to help pro-Western forces in Angola. Originally, Mr. Innis had said that the mercenaries he was recruiting were to be used only for humanitarian purposes, but now his motives are clear in this grisly affair.

Recruitment of mercs is normally conducted by mail between ex-soldiers who are well aware of one another's skills and background. This eliminates the possibility of lion and hurries the process of selection. This practice was made even clearer to me a few weeks ago when an ex-serviceman friend of mine gave me a copy of a memo that was intended for a friend of his who was also a Vietnam veteran. Naturally, I must use some discretion in this matter and cannot reveal the parties involved, but the message is clear.

As this problem of mercenaries comes closer to home, we have to be all the more concerned and vigilant. The situation is sad enough in Angola without U.S. recruited mercs adding to the gore. With the conditions for the use of mercenaries in Africa on the rise we must do all we can to expose this nefarious practice and undermine the "respectability" that certain Europeans have given this slay-for-pay trade.

But so long as there exist shaky empires in Africa, with only a semblance of central control and a brewing civil war, then the door is wide open for the entrance of the mercenaries. For as the poet A.E. Housman put it in his Epitaph to an Army of Mercenaries:

Their shoulders held the sky suspended;

What God abandoned, these defended,

And saved the sum of things for pay.

Herbert Boyd teaches in the Black Studies Department at Wayne State University and edits the Newsletter of the Detroit Committee for the Liberation of Africa.