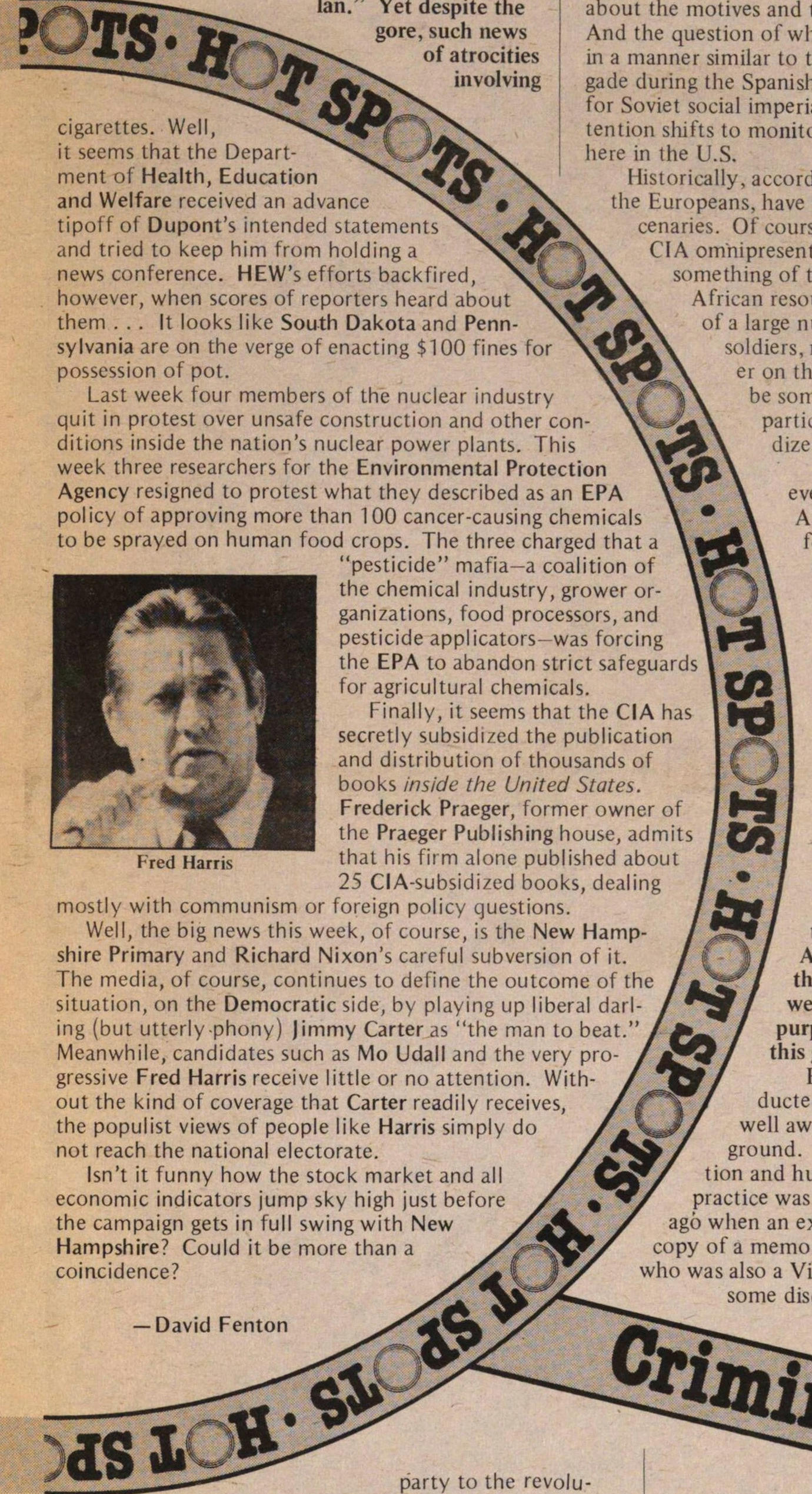 The latest in the King assassination case: Long Island's Newsday newspaper reports that undercover FBI agents "actvely participated" n the Memphis riots in 1968 that drew Dr. Martin Luther King to the city where he was murdered. Newsday says the violence which broke out n Memphis was encouraged and purposely calated by the undercover agents. King hadn't planned on returning to Memphis but for the riots. Newsday also reports that some of the same undercover police agents were assigned, just one week later, to provide security for Dr. King at the Lorraine Motel sn the day he was assassinated.

A civil suit going on in Chicago right now could mine for the first time whether the FBI sanctioned murder I as part ot lts etrorts against lert' wing groups in the late 1960's. The parents of slain Black Panther leaders Fred Hampton and Mark Clark are suing for $47.7 million in damages resulting from Fred and Mark's death in a pre-planned police shootout in Chicago in 1969. Attorneys in the case say they have evidence implicating the highest echelons of the Justice Department in the murder, including the fact that Hampton's bodyguard at the time was a paid FBI informer who supplied a map of Hampton's apartment to the Chicago police marking the spot where the Panther leader slept. Hampton, who was drugged at the time of his murder, was kill ed instantly in a fusillade of 90 bullets.

Pacific News Service reports that the FBI may have been using a CIA-trained agent to infiltrate the American Indian Movement and encourage AIM members to commit violent acts. The agent, Douglas Durham, was AIM's Chief of Security, of course. Pacific News says Durham was not an Indian, but had had his skin chemically treated to aid in his new identity.

Elsewhere in the federal bureaucracy, last week Dr. Robert Dupont, head of the National Institute on Drug Abuse, announced that in his opinion, marijuana was less dangerous than alcohol and cigarettes. Well, it seems that the Department of Health, Education and Welfare received an advance tipoff of Dupont's intended statements and tried to keep him from holding a news conference. HEW's efforts backfired, however, when scores of reporters heard about them...It looks like South Dakota and Pennsylvania are on the verge of enacting $100 fines for possession of pot.

Last week four members of the nuclear industry quit in protest over unsafe construction and other conditions inside the nation's nuclear power plants. This week three researchers for the Environmental Protection Agency resigned to protest what they described as an EPA policy of approving more than 100 cancer-causing chemicals to be sprayed on human food crops. The three charged that a "pesticide" mafia-a coalition of the chemical industry, grower organizations, food processors, and pesticide applicators-was forcing the EPA to abandon strict safeguards for agricultural chemicals.

Finally, it seems that the CIA has secretly subsidized the publication and distribution of thousands of books inside the United States. Frederick Praeger, former owner of the Praeger Publishing house, admits that his firm alone published about 25 CIA-subsidized books, dealine mostly with communism or foreign policy questions. Well, the big news this week, of course, is the New Hampshire Primary and Richard Nixon's careful subversion of it. The media, of course, continues to define the outcome of the situation, on the Democratic side, by playing up liberal darlng (but utterly phony) Jimmy Carter as "the man to beat." Meanwhile, candidates such as Mo Udall and the very progressive Fred Harris receive little or no attention. Without the kind of coverage that Carter readily receives, the populist views of people like Harris simply do not reach the national electorate.

Isn't it funny how the stock market and all economic indicators jump sky high just before the campaign gets in full swing with New Hampshire? Could't it be more than a coincidence?