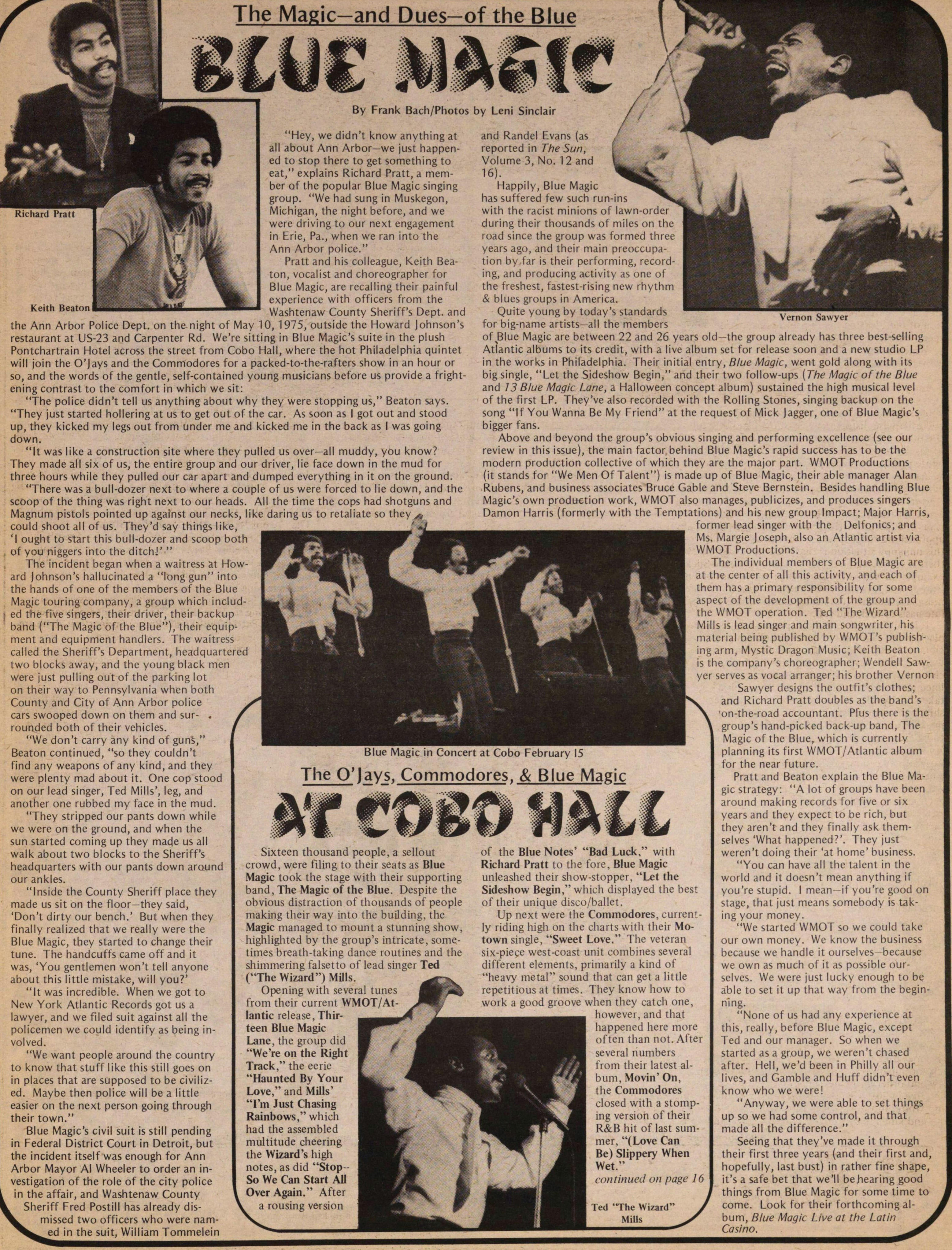 "Hey, we didn't know anything at all about Ann Arbor--we just happened to stop there to get something to eat," explains Richard Pratt, a member of the popular Blue Magic singing group. "We had sung in Muskegon, Michigan, the night before, and we were driving to our next engagement in Erie, Pa., when we ran into the Ann Arbor police."

Pratt and his colleague, Keith Beaton, vocalist and choreographer for Blue Magic, are recalling their painful experience with officers from the Washtenaw County Sheriff's Dept. and the Ann Arbor Police Dept. on the night of May 10, 1975, outside the Howard Johnson's restaurant at US-23 and Carpenter Rd. We're sitting in Blue Magic's suite in the plush Pontchartrain Hotel across the street from Cobo Hall, where the hot Philadelphia quintet will join the O'Jays and the Commodores for a packed-to-the-rafters show in an hour or so, and the words of the gentle, self-contained young musicians before us provide a frightening contrast to the comfort in which we sit:

"The police didn't tell us anything about why they were stopping us," Beaton says. "They just started hollering at us to get out of the car. As soon as I got out and stood up, they kicked my legs out from under me and kicked me in the back as I was going down.

"It was like a construction site where they pulled us over--all muddy, you know? They made all six of us, the entire group and our driver, lie face down in the mud for three hours while they pulled our car apart and dumped everything in it on the ground. "There was a bull-dozer next to where a couple of us were forced to lie down, and the scoop of the thing was right next to our heads. All the time the cops had shotguns and Magnum pistols pointed up against our necks, like daring us to retaliate so they could shoot all of us. They'd say things like, 'I ought to start this bull-dozer and scoop both of you niggers into the ditch!' "

The incident began when a waitress at Howard Johnson's hallucinated a "long gun" into the hands of one of the members of the Blue Magic touring company, a group which included the five singers, their driver, their backup band ("The Magic of the Blue"), their equipment and equipment handlers. The waitress called the Sheriff's Department, headquartered two blocks away, and the young black men were just pulling out of the parking lot on their way to Pennsylvania while both County and City of Ann Arbor police cars swooped down on them and surrounded both of their vehicles.

"We don't carry any kind of guns," Beaton continued, "so they couldn't find any weapons of any kind, and they were plenty mad about it. One cop stood on our lead singer, Ted Mills', leg, and another one rubbed my face in the mud.

"They stripped our pants down while we were on the ground, and when the sun started coming up they made us all walk about two blocks to the Sheriff's headquarters with our pants down around our ankles.

"Inside the County Sheriff place they made us sit on the floor--they said, 'Don't dirty our bench.' But when they finally realized that we really were the Blue Magic, they started to change their tune. The handcuffs came off and it was, 'You gentlemen won't tell anyone about this little mistake, will you?'

"It was incredible. When we got to New York Atlantic Records got us a lawyer, and we filed suit against all the policemen we could identify as being involved. "We want people around the country to know that stuff like this still goes on in places that are supposed to be civilized. Maybe then police will be a little easier on the next person going through their town."

Blue Magic's civil suit is still pending in Federal District Court in Detroit, but the incident itself was enough for Ann Arbor Mayor Al Wheeler to order an investigation of the role of the city police in the affair, and Washtenaw County L Sheriff Fred Postill has already dismissed two officers who were named in the suit, William Tommelein and Randel Evans (as reported in The Sun, Volume 3, No. 12 and 16).

Happily, Blue Magic has suffered few such run-ins with the racist minions of lawn-order during their thousands of miles on the road since the group was formed three years ago, and their main preoccupation by far is their performing, recording, and producing activity as one of the freshest, fastest-rising new rhythm & blues groups in America.

Quite young by today's standards for big-name artists - all the members of Blue Magic are between 22 and 26 years old- the group already has three best-selling Atlantic albums to its credit, with a live album set for release soon and a new studio LP in the works in Philadelphia. Their initial entry, Blue Magic, went gold along with its big single, "Let the Sideshow Begin," and their two follow-ups (The Magic of the Blue and 13 Blue Magic Lane, a Halloween concept album) sustained the high musical level of the first LP. They've also recorded with the Rolling Stones, singing backup on the song "If You Wanna Be My Friend" at the request of Mick Jagger, one of Blue Magic's bigger fans.

Above and beyond the group's obvious singing and performing excellence (see our review in this issue), the main factor behind Blue Magic's rapid success has to be the modern production collective of which they are the major part. WMOT Productions (it stands for "We Men Of Talent") is made up of Blue Magic, their able manager Alan Rubens, and business associates Bruce Gable and Steve Bernstein. Besides handling Blue Magic's own production work, WMOT also manages, publicizes, and produces singers Damon Harris (formerly with the Temptations) and his new group Impact; Major Harris, former lead singer with the Delfonics; and Ms, Margie Joseph, also an Atlantic artist via WMOT Productions.

The individual members of Blue Magic are at the center of all this activity, and each of them has a primary responsibility for some aspect of the development of the group and the WMOT operation. Ted "The Wizard" Mills is lead singer and main songwriter, his material being published by WMOT's publishing arm, Mystic Dragon Music; Keith Beaton is the company's choreographer; Wendell Sawyer serves as vocal arranger; his brother Vernon Sawyer designs the outfit's clothes; and Richard Pratt doubles as the band's on-the-road accountant. Plus there is the group's hand-picked back-up band, The Magic of the Blue, which is currently planning its first WMOT Atlantic album for the near future.

Pratt and Beaton explain the Blue Magic strategy: "A lot of groups have been around making records for five or six years and they expect to be rich, but they aren't and they finally ask themselves 'What happened?'. They just weren't doing their 'at home' business.

"You can have all the talent in the world and it doesn't mean anything if you're stupid. I mean--if you're good on stage, that just means somebody is taking your money.

"We started WMOT so we could take our own money. We know the business because we handle it ourselves - because we own as much of it as possible ourselves. We were just lucky enough to be able to set it up that way from the beginning.

"None of us had any experience at this, really, before Blue Magic, except Ted and our manager. So when we started as a group, we weren't chased after. Hell, we'd been in Philly all our lives, and Gamble and Huff didn't even know who we were!

"Anyway, we were able to set things up so we had some control, and that made all the difference." Seeing that they've made it through their first three years (and their first and, hopefully, last bust) in rather fine shape, it's a safe bet that we'II be hearing good things from Blue Magic for some time to come. Look for their forthcoming album, Blue Magic Live at the Latin Casino.