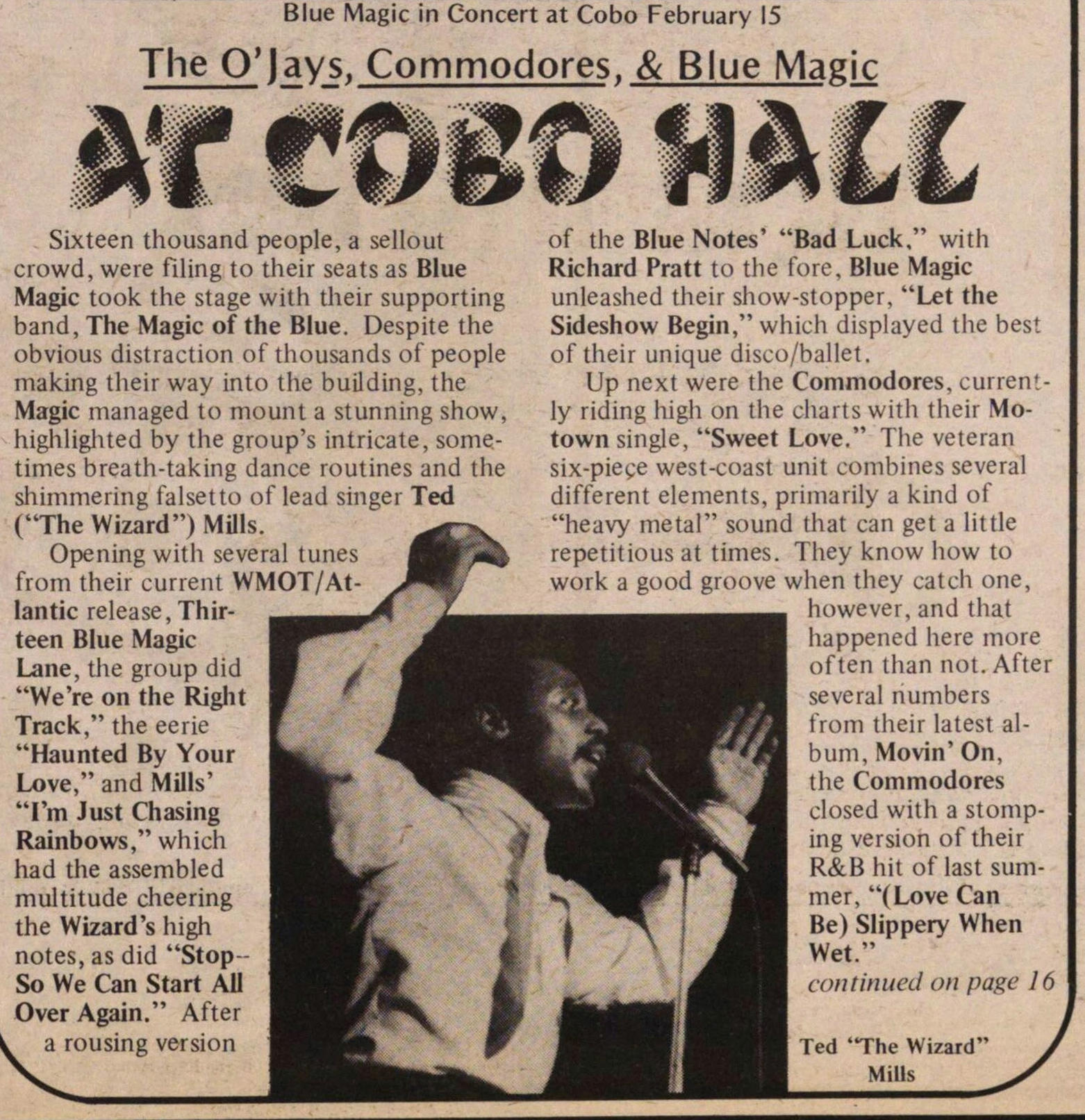 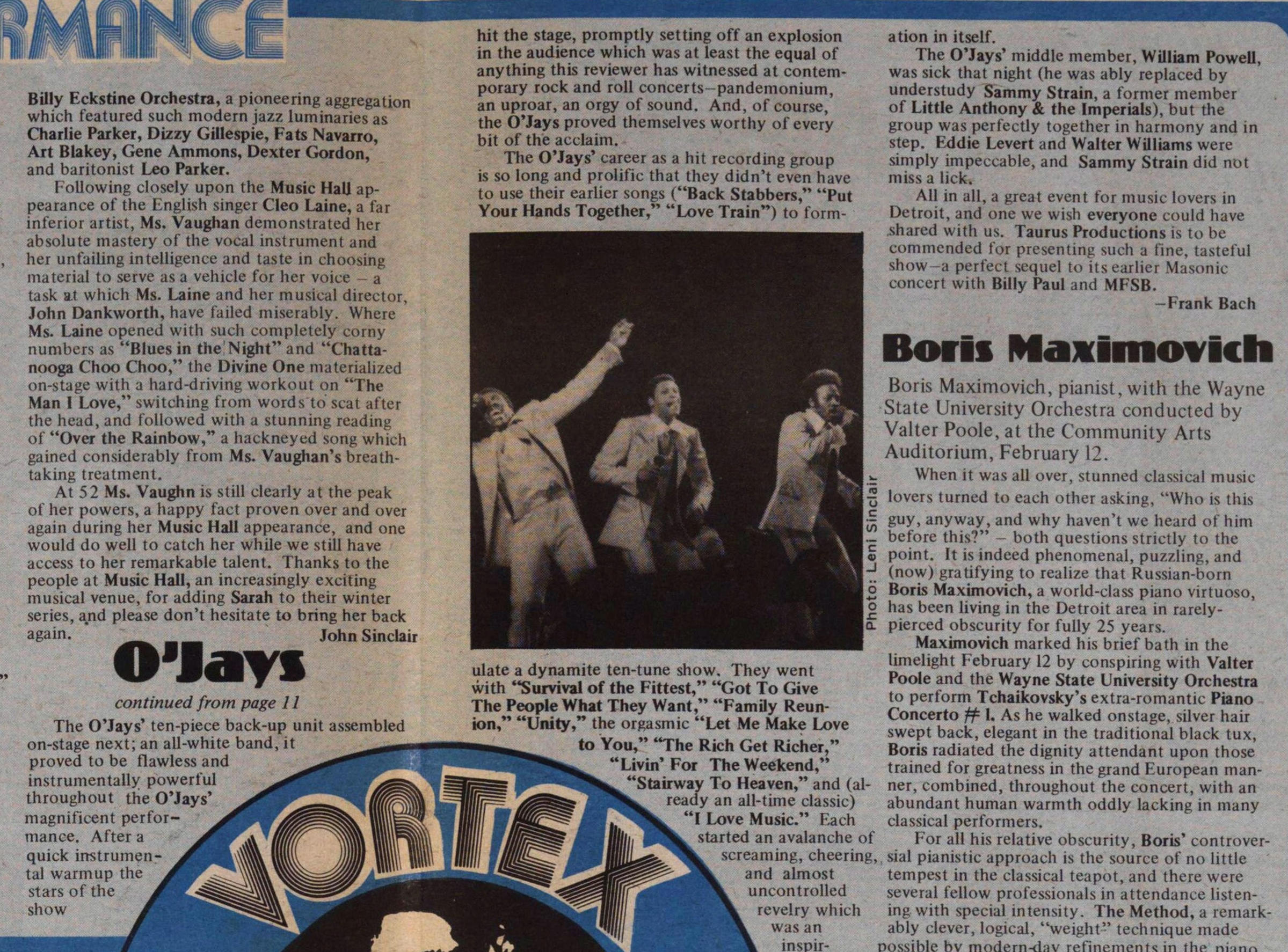 Sixteen thousand people, a sellout crowd, were filing to their seats as Blue Magic took the stage with their supporting band, The Magic of the Blue. Despite the obvious distraction of thousands of people making their way into the building, the Magic managed to mount a stunning show, highlighted by the group's intricate, sometimes breath-taking dance routines and the shimmering falsetto of lead singer Ted ("The Wizard") Mills.

Opening with several tunes from their current WMOT/Atlantic release, Thirteen Blue Magic Lane, the group did "We're on the Right Track," the eerie "Haunted By Your Love," and Mills' "I'm Just Chasing Rainbows," which had the assembled multitude cheering the Wizard's high notes, as did "Stop -- So We Can Start All Over Again." After a rousing version of the Blue Notes' "Bad Luck," with Richard Pratt to the fore. Blue Magic unleashed their show-stopper, "Let the Sideshow Begin," which displayed the best of their unique disco/ballet.

Up next were the Commodores, currently riding high on the charts with their Motown single, "Sweet Love." The veteran six-piece west-coast unit combines several different elements, primarily a kind of "heavy metal" sound that can get a little repetitious at times. They know how to work a good groove when they catch one, however, and that happened here more of ten than not. After several numbers from their latest album, Movin' On, the Commodores closed with a stomping version of their R&B hit of last summer, "(Love Can Be) Slippery When Wet."

The O'Jays' career as a hit recording group is so long and prolific that they didn't even have to use their earlier songs ("Back Stabbers," "Put Your Hands Together," "Love Train") to formulate a dynamite ten-tune show. They went with "Survival of the Fittest," "Got To Give The People What They Want," "Family Reunion," "Unity," the orgasmic "Let Me Make Love to You," "The Rich Get Richer." 'Livin' For The Weekend," "Stairway To Heaven," and already an all-time classic) "I Love Music." Each started an avalanche of screaming, cheering, and almost uncontrolled revelry which was an inspiration in itself.

The O'Jays' middle member, William Powell, was sick that night (he was ably replaced by understudy Sammy Strain, a former member of Little Anthony & the Imperials), but the group was perfectly together in harmony and in step. Eddie Levert and Walter Williams were simply impeccable, and Sammy Strain did not miss a lick. All in all, a great event for music lovers in Detroit, and one we wish everyone could have shared with us. Taurus Productions is to bc commended tor presenting such a fine, tasteful show – a perfect sequel to its earlier Masonic concert with Billy Paul and MFSB.