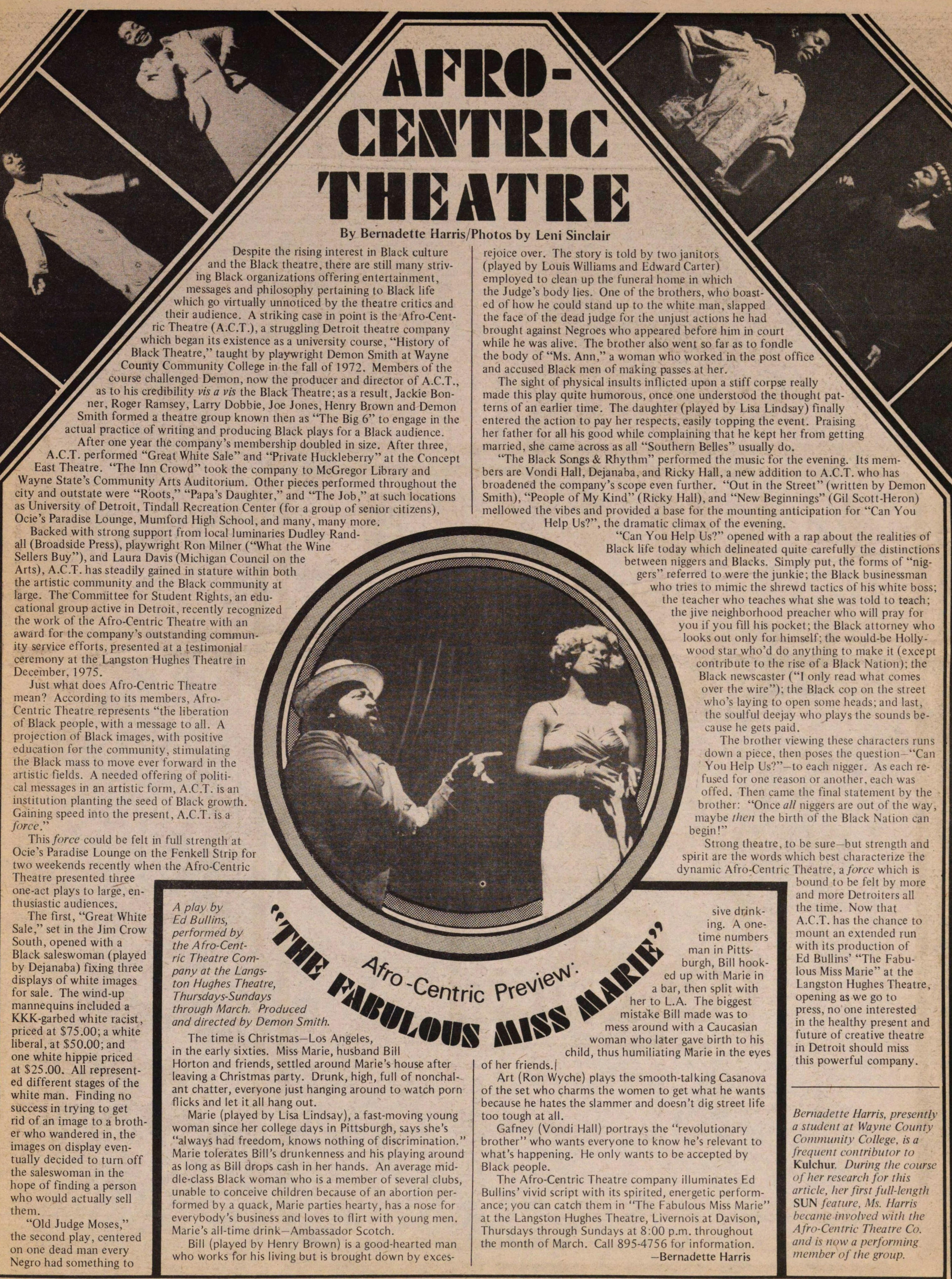 By Bernadette Harris/Photos by Leni Sinclair

Despite the rising interest in Black culture and the Black theatre, there are still many striving Black organizations offering entertainment, messages and philosophy pertaining to Black life which go virtually unnoticed by the theatre critics and their audience. A striking case in point is the Afro-Centric Theater (A.C.T.), a struggling Detroit theatre company which began its existence as a university course, "History of Black Theatre," taught by playwright Demon Smith at Wayne County Community College in the fall of 1972. Members of the course challenged Demon, now the producer and director of A.C.T., as to his credibility vis a vis the Black Theatre; as a result, Jackie Bonner, Roger Ramsey, Larry Dobbie, Joe Jones, Henry Brown and Demon Smith formed a theatre group known then as "The Big 6" to engage the actual practice of writing and producing Black plays for a Black audience.

After one year the company's membership doubled in size. After three, A.C.T. performed "Great White Sale" and "Private Huckleberry" at the Concept East Theatre. "The Inn Crowd" took the company to McGregor Library and Wayne State's Community Arts Auditorium. Other pieces performed throughout the city and outstate were "Roots ," "Papa's Daughter," and "The Job," at such locations as University of Detroit, Tindall Recreation Center (for a group of senior citizens), Ocie 's Paradise Lounge, Mumford High School and many, many, more.

Backed with strong support from local luminaries Dudley Randall (Broadside Press), playwright Ron Milner ("What the Wine Sellers Buy"), and Laura Davis (Michigan Council on the Arts), A.C.T. has steadily gained in stature within both the artistic community and the Black community at large. The Committee for Student Rights, an educational group active in Detroit, recently recognized the work of the Afro-CentricTheatre with an award for the company's outstanding community service efforts, presented at a testimonial ceremony at the Langston Hughes Theatre in December, 1975.

Just what does Afro-Centric Theatre mean? According to its members, Afro-Centric Theatre represents "the liberation of Black people, with a message to all. A projection of Black images, with positive education for the community, stimulating the Black mass to move ever forward in the artistic fields. A needed offering of political messages in an artistic form, A.C.T. is an institution planting the seed of Black growth. Gaining speed into the present, A.C.T. is a force."

This force could be felt in full strength at Ocie's Paradise Lounge on the Fenkell Strip for two weekends recently when the Afro-Centric Theatre presented three one-act plays lo large, enthusiastic audiences.

The first, "Great White Sale," set in the Jim Crow South, opened with a Black saleswoman (played by Dejanaba) fixing three displays of white images for sale. The wind-up mannequins included a KKK-garbed white racist, priced at $75.00; a white liberal, at $50.00; and one white hippie priced at $25.00. All represented different stages of the white man. Finding no success in trying to get rid of an image to a brother who wandered in, the images on display eventually decided to turn off the saleswoman in the hope of finding a person who would actually sell them.

"Old Judge Moses," the second play, centered on one dead man every Negro had something to rejoice over. The story is told by two janitors (played by Louis Williams and Edward Carter) employed to clean up the funeral home in which the Judge's body lies. One of the brothers, who boasted of how he could stand up to the white man, slapped the face of the dead judge for the unjust actions he had brought against Negroes who appeared before him in court while he was alive. The brother also went so far as to fondle the body of "Ms. Ann," a woman who worked in the post office and accused Black men of making passes at her.

The sight of physical insults inflicted upon a stiff corpse really made this play quite humorous, once one understood the thought patterns of an earlier time. The daughter (played by Lisa Lindsay) finally entered the action to pay her respects, easily topping the event. Praising her father for all his good while complaining that he kept her from getting married, she came across as all "Southern Belles" usually do.

"The Black Songs & Rhythm" performed the music for the evening. lts members are Vondi Hall, Dejanaba, and Ricky Hall, a new addition to A.C.T. who has broadened the company's scope even further. "Out in the Street" (written by Demon Smith), "People of My Kind" (Ricky Hall), and "New Beginnings" (Gil Scott-Heron) mellowed the vibes and provided a base for the mounting anticipation for "Can Yon Help Us?", the dramatic climax of the evening.

"Can You Help Us?" opened with a rap about the realities of Black life today which delineated quite carefully the distinctions between niggers and Blacks. Simply put, the forms of "niggers" referred to were the junkie; the Black businessman who tries to mimic the shrewd tactics of his white boss; the teacher who teaches what she was told to teach; the jive neighborhood preacher who will pray for you if you fill his pocket; the Black attorney who looks out only for himself: the would-be Hollywood star who'd do anything to make it (except contribute to the rise of a Black Nation); the Black newscaster ("I only read what comes over the wire"); the Black cop on the street who's laying to open some heads; and last, the soulful deejay who plays the sounds because he gets paid.

The brother viewing these characters runs down a piece, then poses the "Can You Help Us?"- to each nigger. As each refused for one reason or another, each was offed. Then came the final statement by the brother: "Once all niggers are out of the way, maybe then the birth of the Black Nation can begin!"

Strong theatre, to be sure–but strength and spirit are the words which best characterize the dynamic Afro-Centric Theater, Jone which is bound to be felt by more and more Detroiters all the time. Now that A.C.T. has the chance to mount an extended run with its production of Ed Bullins' "The Fabulous Miss Marie" at the Langston Hughes Theatre, opening as we go to press, no one interested in the healthy present and future of creative theatre in Detroit should miss this powerful company.

Bernadette Harris, presently a student at Wayne County Community College, is a frequent contributor to Kulchur. During the course of her research for this article, her first full-length SUN feature, Ms. Harris became involved with the Afro-Centric Theatre Co. and is now a performing member of the group.