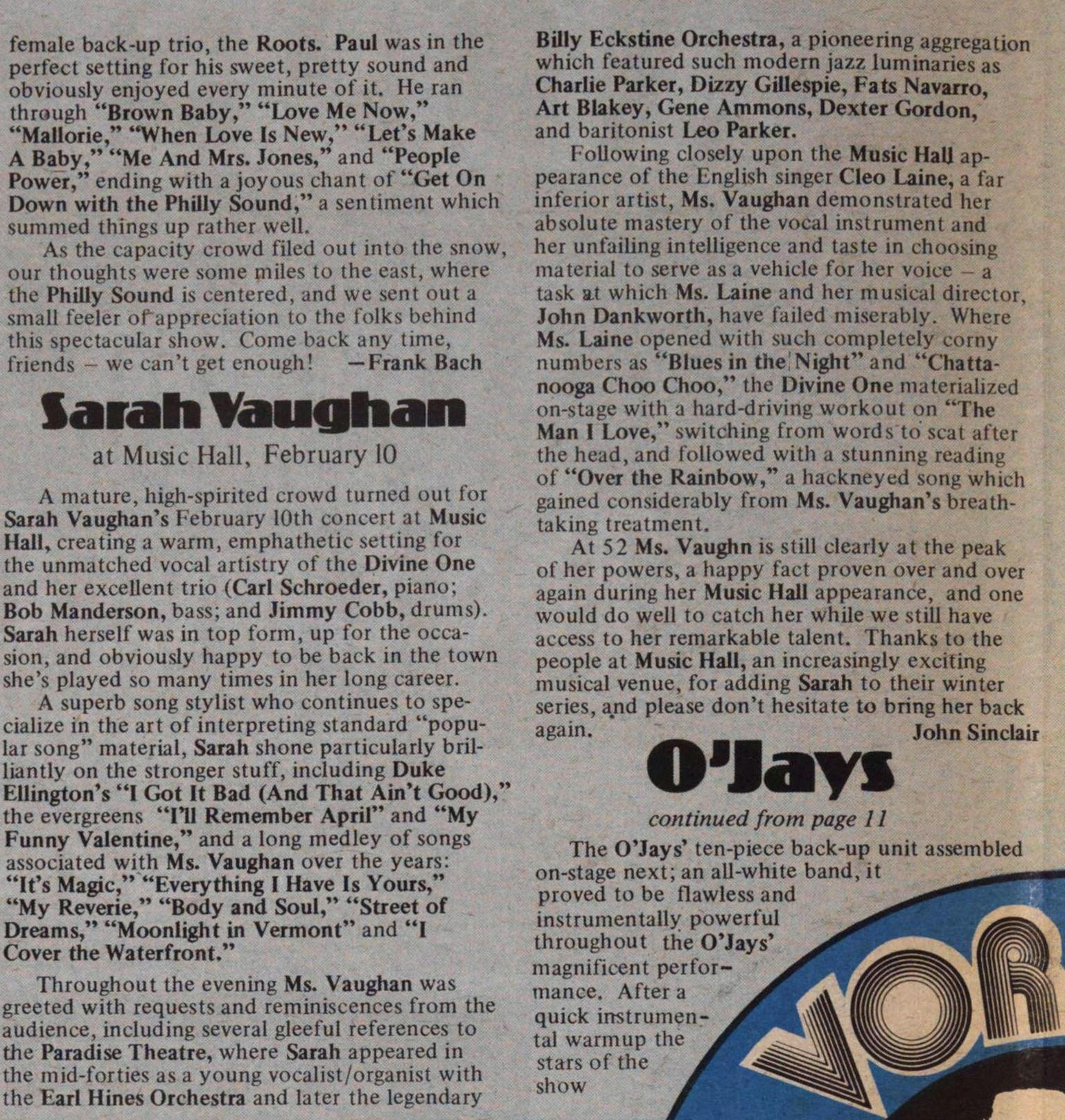 A mature, high-spirited crowd turned out tor Sarah Vaughan's February 10th concert at Music Hall, creating a warm, empathetic setting for the unmatched vocal artistry of the Divine One and her excellent trio (Carl Schroeder, piano; Bob Manderson, bass; and Jimmy Cobb, drums). Sarah herself was in top form, up for the occasion, and obviously happy to be back in the town she's played so many times in her long career.

A superb song stylist who continues to specialize in the art of interpreting standard "popular song" material, Sarah shone particularly brilliantly on the stronger stuff, including Duke Ellington's "I Got It Bad (And That Ain't Good)," the evergreens "I'll Remember April" and "My Funny Valentine," and a long medley of songs associated with Ms. Vaughan over the years: "It's Magic," "Everything I Have Is Yours," "My Reverie," "Body and Soul," "Street of Dreams," "Moonlight in Vermont" and "I Cover the Waterfront."

Throughout the evening Ms. Vaughan was greeted with requests and reminiscences from the audience, including several gleeful references to the Paradise Theatre, where Sarah appeared in the mid-forties as a young vocalist/organist with the Earl Hines Orchestra and later the legendary Billy Eckstine Orchestra, a pioneering aggregation which featured such modern jazz luminaries as Charlie Parker, Dizzy Gillespie, Fats Navarro, Art Blakey, Gene Ammons, Dexter Gordon, and baritonist Leo Parker.

Following closely upon the Music Hall appearance of the English singer Cleo Laine, a far inferior artist, Ms. Vaughan demonstrated her absolute mastery of the vocal instrument and her unfailing intelligence and taste in choosing material to serve as a vehicle for her voice - a task at which Ms. Laine and her musical director, John Dankworth, have failed miserably. Where Ms. Laine opened with such completely corny numbers as "Blues in the Night" and "Chattanooga Choo Choo," the Divine One materialized on-stage with a hard-driving workout on "The Man I Love," switching from words to scat after the head, and followed with a stunning reading of "Over the Rainbow," a hackneyed song which gained considerably from Ms. Vaughan's breathtaking treatment.

At 52 Ms. Vaughn is still clearly at the peak of her powers, a happy fact proven over and over again during her Music Hall appearance, and one would do well to catch her while we still have access to her remarkable talent. Thanks to the people at Music Hall, an increasingly exciting musical venue, for adding Sarah to their winter series, and please don't hesitate to bring her back again.