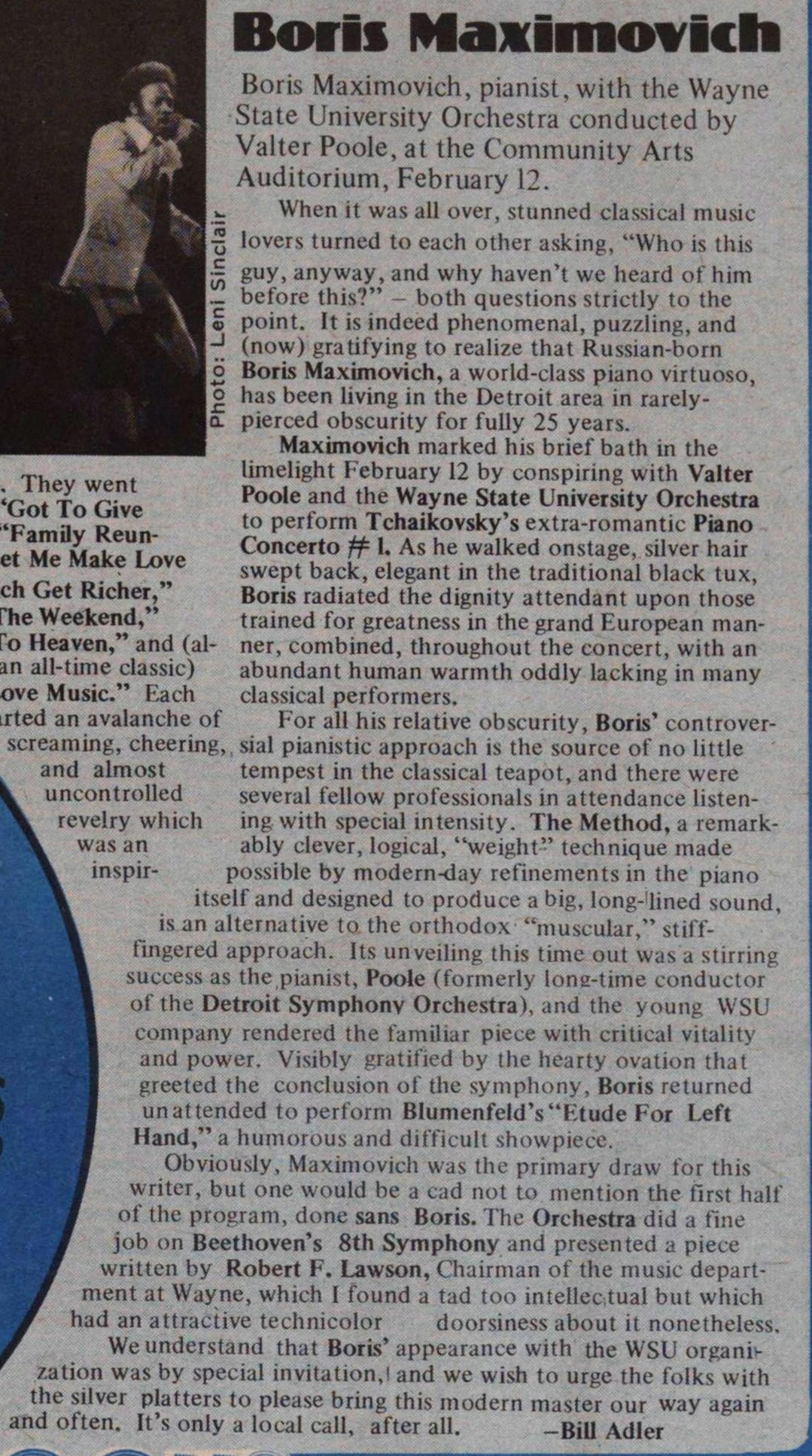 When it was all over, stunned classical music lovers turned to each other asking, "Who is this guy, anyway, and why haven't we heard of him before this?" - both questions strictly to the point. It is indeed phenomenal, puzzling, and (now) gratifying to realize that Russian-born Boris Maximovich, a world-class piano virtuoso, has been living in the Detroit area in rarely-pierced obscurity for fully 25 years.

Maximovich marked his brief bath in the limelight February 12 by conspiring with Valter Poole and the Wayne State University Orchestra to perform Tchaikovsky's extra-romantic Piano Concerto #1. As he walked onstage, silver hair swept back, elegant in the traditional black tux, Boris radiated the dignity attendant upon those trained for greatness in the grand European manner, combined, throughout the concert, with an abundant human warmth oddly lacking in many classical performers.

For all his relative obscurity, Boris' controversial pianistic approach is the source of no little tempest in the classical teapot, and there were several fellow professionals in attendance listening with special intensity. The Method, a remarkably clever, logical, "weight" technique made possible by modern-day refinements in the piano itself and designed to produce a big, long-lined sound, is an alternative to the orthodox "muscular," stiff-fingered approach. lts unveiling this time out was a stirring success as the pianist, Poole (formerly long-time conductor of the Detroit Symphony Orchestra), and the young WSU company rendered the familiar piece with critical vitality and power. Visibly gratified by the hearty ovation that greeted the conclusion of the symphony, Boris returned unattended to perform Blumenfeld's "Etude For Left Hand," a humorous and difficult showpiece.

Obviously, Maximovich was the primary draw tor this writer, but one would be a cad not to mention the first half of the program, done sans Boris. The Orchestra did a fine job on Beethoven's 8th Symphony and presented a piece written by Robert F. Lawson, Chairman of the music department at Wayne, which I found a tad too intellectual but which had an attractive technicolor doorsiness about it nonetheless.

We understand that Boris' appearance with the WSU organization was by special invitation, and we wish to urge the folks with the silver platters to please bring this modern master our way again and often. It's only a local call, after all.