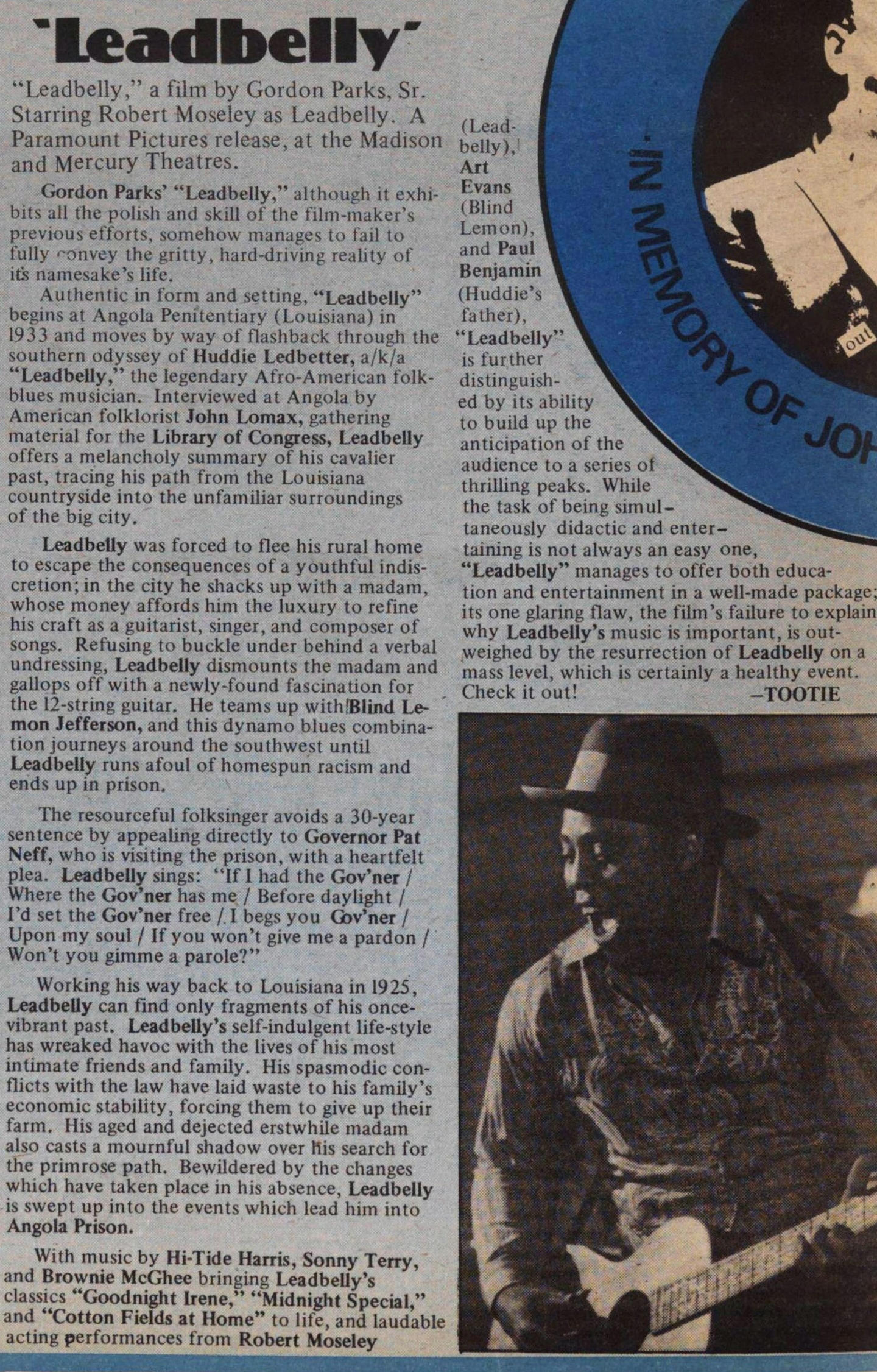 "Leadbelly," a film by Gordon Parles, Sr. Starring Robert Moseley as Leadbelly. A Paramount Pictures release, at the Madison and Mercury Theatres.

Gordon Parks' "Leadbelly," although it exhibits all the polish and skill of the film-maker's previous efforts, somehow manages to fail to fully convey the gritty, hard-driving reality of its namesake's life.

Authentic in form and setting, "Leadbelly" begins at Angola Penitentiary (Louisiana) in 1933 and moves by way of flashback through the southern odyssey of Huddie Ledbetter, aka "Leadbelly," the legendary Afro-American folk-blues musician. Interviewed at Angola by American folklorist John Lomax, gathering material for the Library of Congress, Leadbelly offers a melancholy summary of his cavalier past, tracing his path from the Louisiana countryside into the unfamiliar surroundings of the big city.

Leadbelly was forced to flee his rural home to escape the consequences of a youthful indiscretion; in the city he shacks up with a madam, whose money affords him the luxury to refine his craft as a guitarist, singer, and composer of songs. Refusing to buckle under behind a verbal undressing, Leadbelly dismounts the madam and gallops off with a newly-found fascination for the 12-string guitar. He teams up with Blind Lemon Jefferson, and this dynamo blues combination journeys around the Southwest until Leadbelly runs afoul of homespun racism and ends up in prison.

The resourceful folksinger avoids a 30-year sentence by appealing directly to Governor Pat Neff, who is visiting the prison, with a heartfelt plea. Leadbelly sings: "If I had the Gov'ner / Where the Gov'ner has me / Before daylight / I'd set the Gov'ner free / I begs you Gov'ner / Upon my soul / If you won't give me a pardon / Won't you gimme a parole?"

Working his way back to Louisiana in 1925, Leadbelly can find only fragments of his once vibrant past. Leadbelly's self-indulgent life-style has wreaked havoc with the lives of his most intimate friends and family. His spasmodic conflicts with the law have laid waste to his family's economic stability, forcing them to give up their farm. His aged and dejected erstwhile madam also casts a mournful shadow over his search for the primrose path. Bewildered by the changes which have taken place in his absence, Leadbelly is swept up into the events which lead him into Angola Prison.

With music by Hi-Tide Harris, Sonny Terry, and Brownie McGhee bringing Leadbelly's classics "Goodnight Irene," "Midnight Special," and "Cotton Fields at Home" to life, and laudable acting performances from Robert Moseley (Leadbelly), Art Evans (Blind Lemon), and Paul Benjamin (Huddie's father), "Leadbelly" is further distinguished by its ability to build up the anticipation of the audience to a series of thrilling peaks. While the task of being simultaneously didactic and entertaining is not always an easy one, "Leadbelly" manages to offer both education and entertainment in a well-made package; its one glaring flaw, the film's failure to explain why Leadbelly's music is important, is outweighed by the resurrection of Leadbelly on a mass level, which is certainly a healthy event. Check it out!