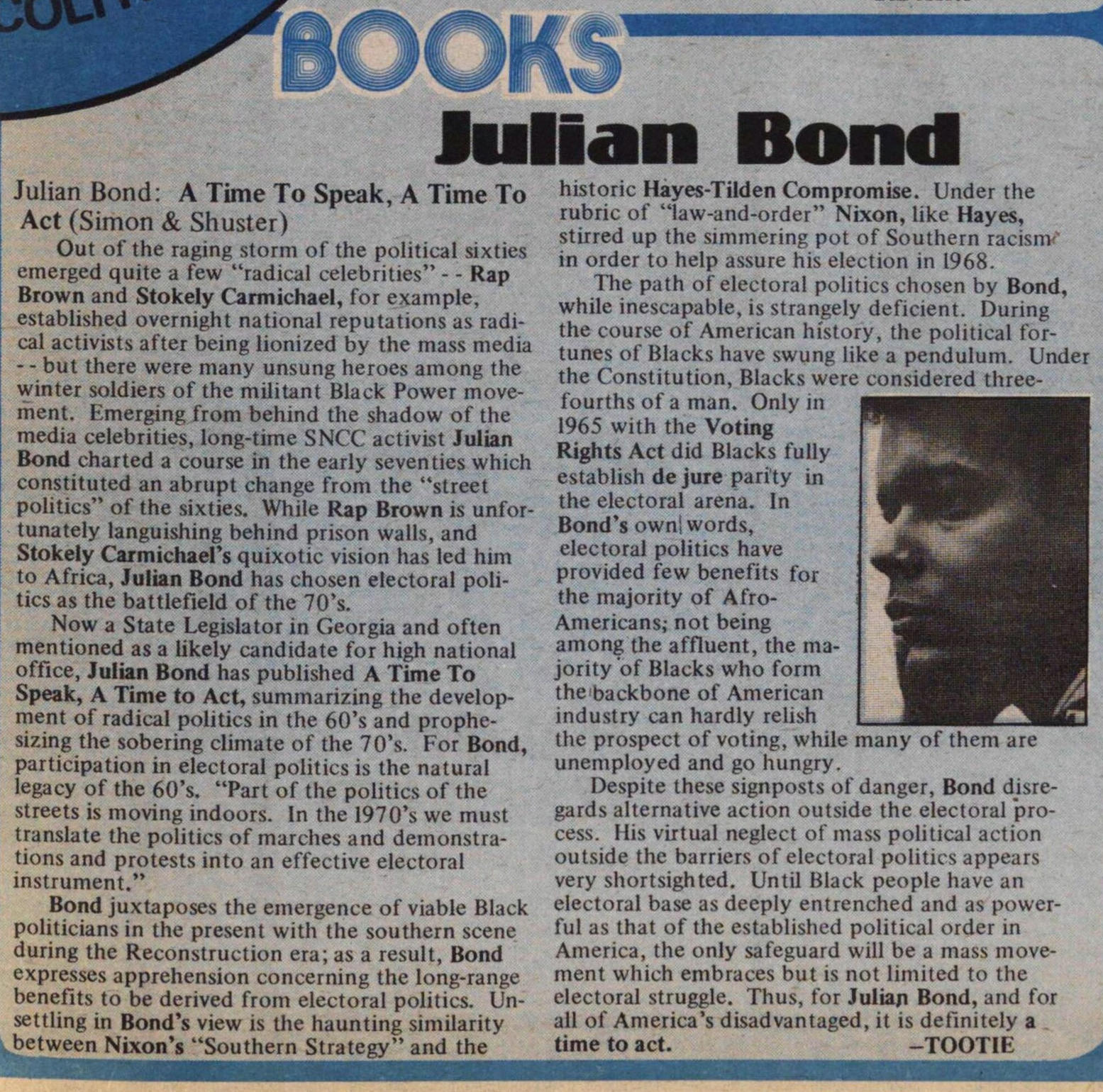 Julian Bond: A Time To Speak, A Time To Act (Simon & Shuster)

Out of the raging storm of the political sixties emerged quite a few "radical celebrities" - - Rap Brown and Stokely Carmichael, for example, established overnight national reputations as radical activists after being lionized by the mass media - - but there were many unsung heroes among the winter soldiers of the militant Black Power movement. Emerging from behind the shadow of the media celebrities, long-time SNCC activist Julian Bond charted a course in the early seventies which constituted an abrupt change from the "street politics" of the sixties. While Rap Brown is unfortunately languishing behind prison walls, and Stokely Carmichael's quixotic vision has led him to Africa, Julian Bond has chosen electoral politics as the battlefield of the 70's.

Now a State Legislator in Georgia and often mentioned as a likely candidate for high national office, Julian Bond has published A Time To Speak, A Time to Act, summarizing the development of radical politics in the 60's and prophesizing the sobering climate of the 70's. For Bond, participation in electoral politics is the natural legacy of the 60's. "Part of the politics of the streets is moving indoors. In the 1970's we must translate the politics of marches and demonstrations and protests into an effective electoral instrument."

Bond juxtaposes the emergence of viable Black politicians in the present with the southern scene during the Reconstruction era; as a result, Bond expresses apprehension concerning the long-range benefits to be derived from electoral politics. Unsettling in Bond's view is the haunting similarity between Nixon's "Southern Strategy" and the historic Hayes-Tilden Compromise. Under the rubric of "law-and-order" Nixon, like Hayes, stirred up the simmering pot of Southern racism in order to help assure his election in 1968.

The path of electoral politics chosen by Bond, while inescapable, is strangely deficient. During the course of American history, the political fortunes of Blacks have swung like a pendulum. Under the Constitution, Blacks were considered three-fourths of a man. Only in 1965 with the Voting Rights Act did Blacks fully establish de jure parity in the electoral arena. In Bond's own words, electoral politics have provided few benefits for the majority of Afro-Americans; not being among the affluent, the majority of Blacks who form the backbone of American industry can hardly relish the prospect of voting, while many of them are unemployed and go hungry.

Despite these signposts of danger, Bond disregards alternative action outside the electoral process. His virtual neglect of mass political action outside the barriers of electoral politics appears very shortsighted. Until Black people have an electoral base as deeply entrenched and as powerful as that of the established political order in America, the only safeguard will be a mass movement which embraces but is not limited to the electoral struggle. Thus, for Julian Bond, and for all of America's disadvantaged, it is definitely a time to act.