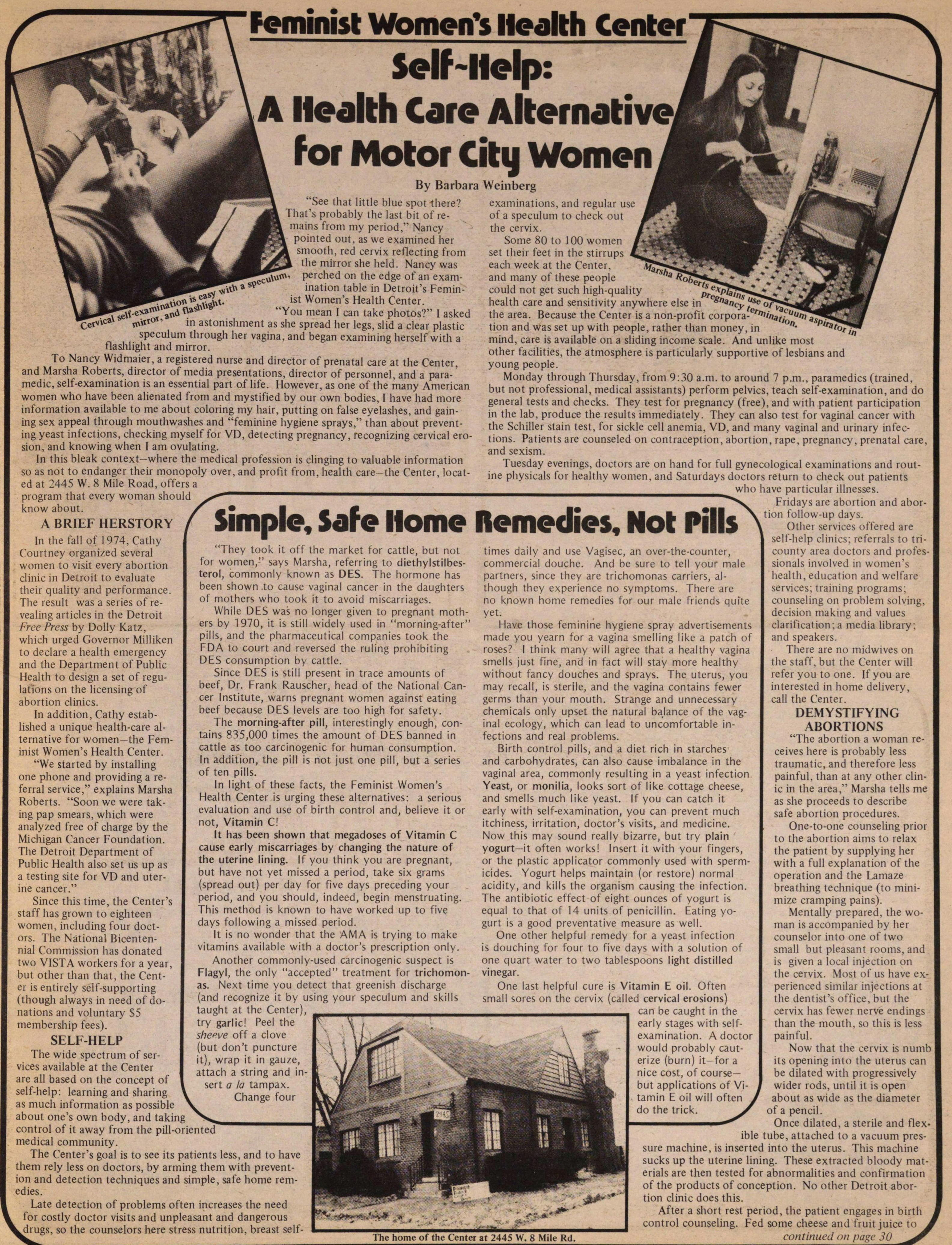 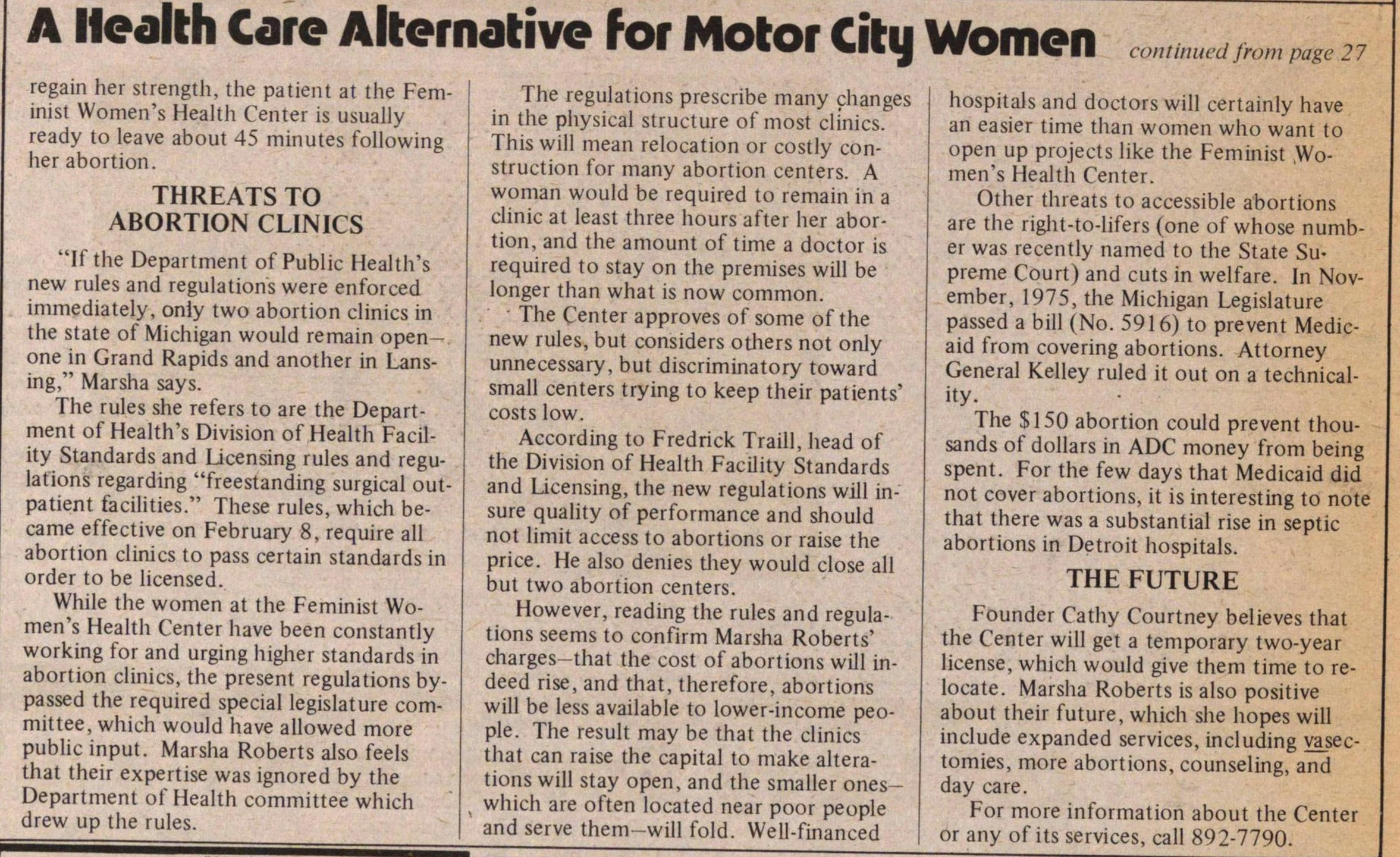 "See that little blue spot there? That's probably the last bit of remains from my period," Nancy pointed out, as we examined her smooth, red cervix reflecting from the mirror she held. Nancy was perched on the edge of an examination table in Detroit's Feminist Women's Health Center. "You mean I can take photos?" I asked in astonishment as she spread her legs, slid a clear plastic speculum through her vagina, and began examining herself with a flashlight and mirror.

To Nancy Widmaier, a registered nurse and director of prenatal care at the Center, and Marsha Roberts, director of media presentations, director of personnel, and a paramedic, self-examination is an essential part of life. However, as one of the many American women who have been alienated from and mystified by our own bodies, I have had more information available to me about coloring my hair, putting on false eyelashes, and gaining sex appeal through mouthwashes and "feminine hygiene sprays," than about preventing yeast infections, checking myself for VD, detecting pregnancy, recognizing cervical erosion, and knowing when I am ovulating.

In this bleak context---where the medical profession is clinging to valuable information so as not to endanger their monopoly over, and profit from, health care---the Center, located at 2445 W. 8 Mile Road, offers a program that every woman should know about.

A BRIEF HERSTORY
In the fall of 1974, Cathy Courtney organized several women to visit every abortion clinic in Detroit to evaluate their quality and performance. The result was a series of revealing articles in the Detroit Free Press by Dolly Katz, which urged Governor Milliken to declare a health emergency and the Department of Public Health to design a set of regulations on the licensing of abortion clinics.

"We started by installing one phone and providing a referral service," explains Marsha Roberts. "Soon we were taking pap smears, which were analyzed free of charge by the Michigan Cancer Foundation. The Detroit Department of Public Health also set us up as a testing site for VD and uterine cancer."

Since this time, the Center's staff has grown to eighteen women, including four doctors. The National Bicentennial Commission has donated two VISTA workers for a year, but other than that, the Center is entirely self-supporting (though always in need of donations and voluntary $5 membership fees).

The wide spectrum of services available at the Center are all based on the concept of self-help: learning and sharing as much information as possible about one's own body, and taking control of it away from the pill-oriented medical community.

The Center's goal is to see its patients less, and to have them rely less on doctors, by arming them with prevention and detection techniques and simple, safe home remedies.

Late detection of problems often increases the need for costly doctor visits and unpleasant and dangerous drugs, so the counselors here stress nutrition, breast self-examinations, and regular use of a speculum to check out the cervix.

Some 80 to 100 women set their feet in the stirrups each week at the Center, and many of these people could not get such high-quality health care and sensitivity anywhere else in the area. Because the Center is a non-profit corporation and was set up with people, rather than money, in mind, care is available on a sliding income scale. And unlike most other facilities, the atmosphere is particularly supportive of lesbians and young people.

Monday through Thursday, from 9:30 a.m. to around 7 p.m., paramedics (trained, but not professional, medical assistants) perform pelvics, teach self-examination, and do general tests and checks. They test for pregnancy (free),and with patient participation in the lab, produce the results immediately. They can also test for vaginal cancer with the Schiller stain test, for sickle cell anemia, VD, and many vaginal and urinary infections. Patients are counseled on contraception, abortion, rape, pregnancy, prenatal care, and sexism.

Tuesday evenings, doctors are on hand for full gynecological examinations and routine physicals for healthy women, and Saturdays doctors return to check out patients who have particular illnesses. Fridays are abortion and abortion follow-up days. Other services offered are self-help clinics; referrals to tricounty area doctors and professionals involved in women's health, education and welfare services; training programs; counseling on problem solving, decision making and values clarification; a media library; and speakers.

There are no midwives on the staff, but the Center will refer you to one. If you are interested in home delivery, cali the Center.

"The abortion a woman receives here is probably less traumatic, and therefore less painful, than at any other clinic in the area," Marsha tells me as she proceeds to describe safe abortion procedures.

One-to-one counseling prior to the abortion aims to relax the patient by supplying her with a full explanation of the operation and the Lamaze breathing technique (to minimize cramping pains).

Mentally prepared, the woman is accompanied by her counselor into one of two small but pleasant rooms, and is given a local injection on the cervix. Most of us have experienced similar injections at the dentist's office, but the cervix has fewer nerve endings than the mouth. so this is less painful.

Now that the cervix is numb its opening into the uterus can be dilated with progressively wider rods, until it is open about as wide as the diameter of a pencil.

Once dilated, a sterile and flexible tube, attached to a vacuum pressure machine, is inserted into the uterus. This machine sucks up the uterine lining. These extracted bloody materials are then tested for abnormalities and confirmation of the products of conception. No other Detroit abortion clinic does this.

After a short rest period, the patient engages in birth control counseling. Fed some cheese and fruit juice to (continued on page 30)

regain her strength, the patient at the Feminist Women's Health Center is usually ready to leave about 45 minutes following her abortion.

"If the Department of Public Health's new rules and regulations were enforced immediately, only two abortion clinics in the state of Michigan would remain open---one in Grand Rapids and another in Lansing," Marsha says.

The rules she refers to are the Department of Health's Division of Health Facility Standards and Licensing rules and regulations regarding "freestanding surgical outpatient facilities." These rules, which became effective on February 8, require all abortion clinics to pass certain standards in order to be licensed.

While the women at the Feminist Women's Health Center have been constantly working for and urging higher standards in abortion clinics, the present regulations bypassed the required special legislature committee, which would have allowed more public input. Marsha Roberts also feels that their expertise was ignored by the Department of Health committee which drew up the rules.

The regulations prescribe many changes in the physical structure of most clinics. This will mean relocation or costly construction for many abortion centers. A woman would be required to remain in a clinic at least three hours after her abortion, and the amount of time a doctor is required to stay on the premises will be longer than what is now common.

The Center approves of some of the new rules, but considers others not only unnecessary, but discriminatory toward small centers trying to keep their patients' costs low.

According to Fredrick Traill, head of the Division of Health Facility Standards and Licensing, the new regulations will insure quality of performance and should not limit access to abortions or raise the price. He also denies they would close all but two abortion centers.

However, reading the rules and regulations seems to confirm Marsha Roberts' charges---that the cost of abortions will indeed rise, and that, therefore, abortions will be less available to lower-income people. The result may be that the clinics that can raise the capital to make alterations will stay open, and the smaller ones---which are often located near poor people and serve them---will fold. Well-financed hospitals and doctors will certainly have an easier time than women who want to open up projects like the Feminist Women's Health Center.

Other threats to accessible abortions are the right-to-lifers (one of whose number was recently named to the State Supreme Court) and cuts in welfare. In November, 1975, the Michigan Legislature passed a bill (No. 5916) to prevent Medicaid from covering abortions. Attorney General Kelley ruled it out on a technicality.

The $150 abortion could prevent thousands of dollars in ADC money from being spent. For the few days that Medicaid did not cover abortions, it is interesting to note that there was a substantial rise in septic abortions in Detroit hospitals.

Founder Cathy Courtney believes that the Center will get a temporary two-year license, which would give them time to relocate. Marsha Roberts is also positive about their future, which she hopes will include expanded services, including vasectomies, more abortions, counseling, and day care. For more information about the Center or any of its services, call 892-7790.