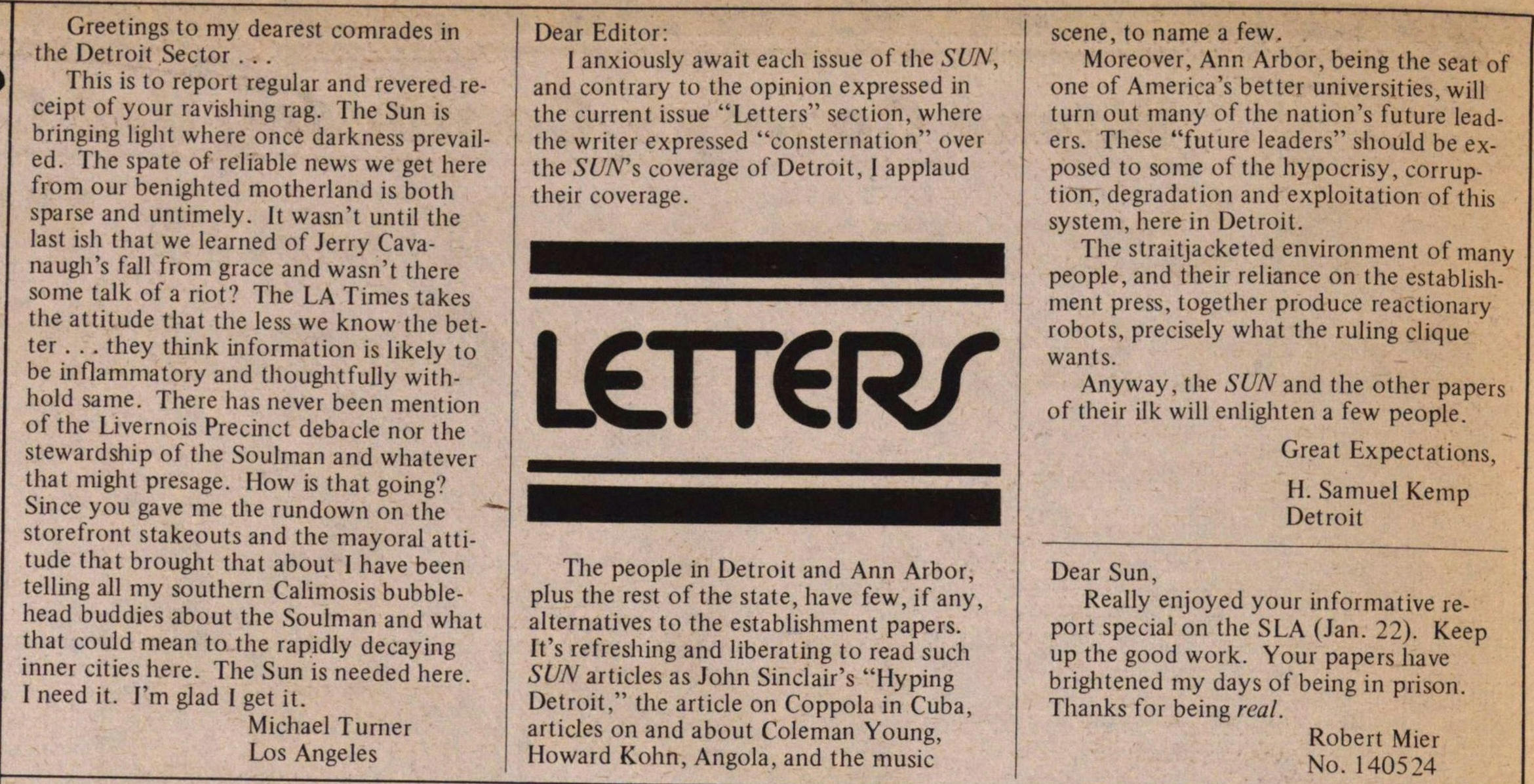 Greetings to my dearest comrades in the Detroit Sector . . .

This is to report regular and revered receipt of your ravishing rag. The Sun is bringing light where once darkness prevailed. The spate of reliable news we get here from our benighted motherland is both sparse and untimely. It wasn't until the last ish that we learned of Jerry Cavanaugh's fall from grace and wasn't there some talk of a riot? The LA Times takes the attitude that the less we know the better . . . they think information is likely to be inflammatory and thouglitfully withhold same.

There has never been mention of the Livemois Precinct debacle nor the stewardship of the Soulman and whatever that might presage. How is that going? Since you gave me the rundown on the storefront stakeouts and the mayoral attitude that brought that about I have been telling all my southern Calimosis bubblehead buddies about the Soulman and what that could mean to the rapidly decaying inner cities here. The Sun is needed here. I need it. I'm glad I get it.

I anxiously await each issue of the SUN, and contrary to the opinion expressed in the current issue "Letters" section, where the writer expressed "consternation" over the SUN's coverage of Detroit, I applaud their coverage.

The people in Detroit and Ann Arbor, plus the rest of the state, have few, if any, alternatives to the establishment papers. It's refreshing and liberating to read such SUN articles as John Sinclair's "Hyping Detroit," the article on Coppola in Cuba, articles on and about Coleman Young, Howard Kohn, Angola, and the music scene, to name a few.

Moreover, Ann Arbor, being the seat of one of America's better universities, will turn out many of the nation's future leaders. These "future leaders" should be exposed to some of the hypocrisy, corruption, degradation and exploitation of this system, here in Detroit.

The straitjacketed environment of many people, and their reliance on the establishment press, together produce reactionary robots, precisely what the ruling clique wants.

Anyway, the SUN and the other papers of their ilk will enlighten a few people.

Really enjoyed your informative report special on the SLA (Jan. 22). Keep up the good work. Your papers have brightened my days of being in prison. Thanks for being real.