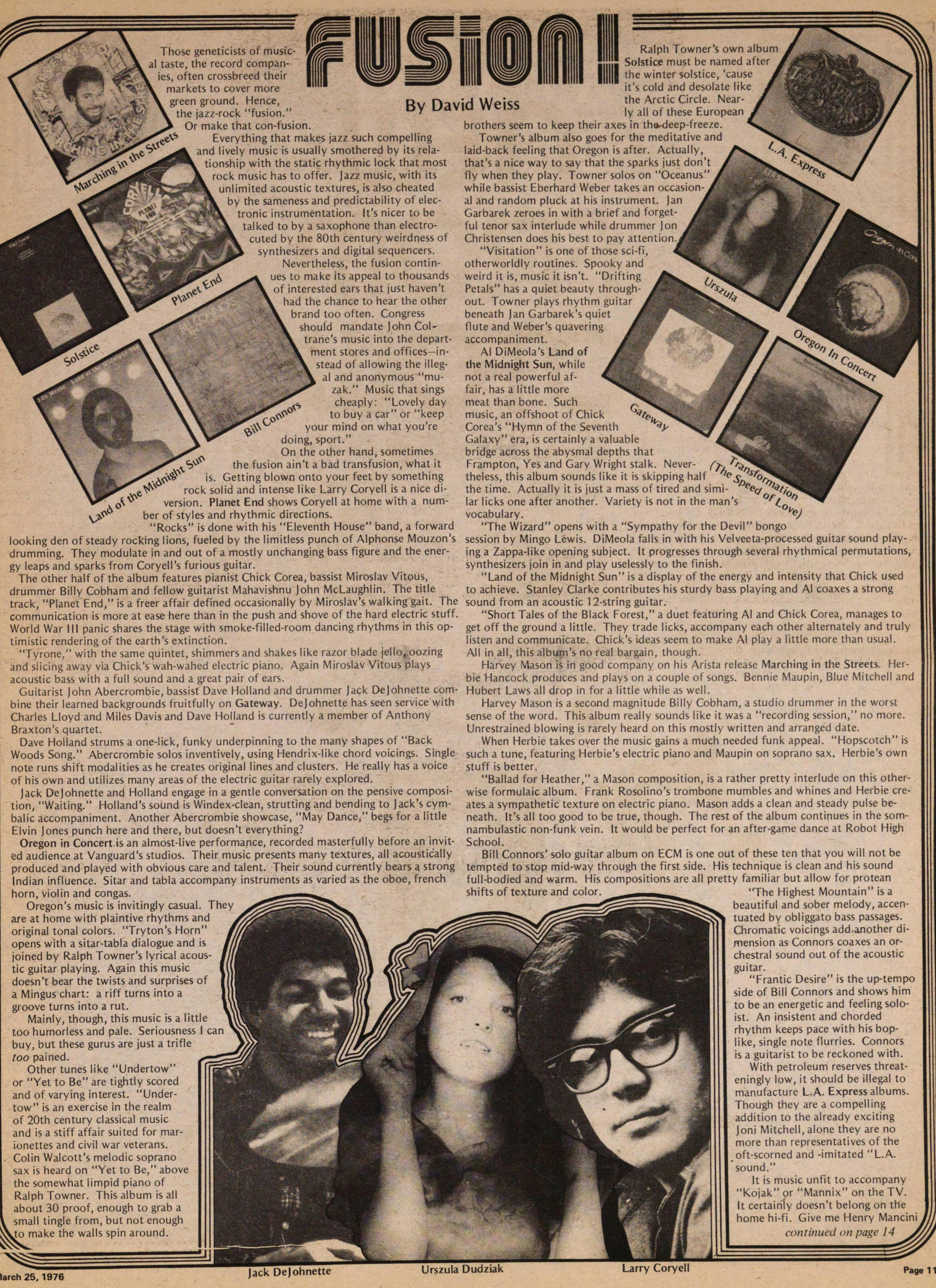 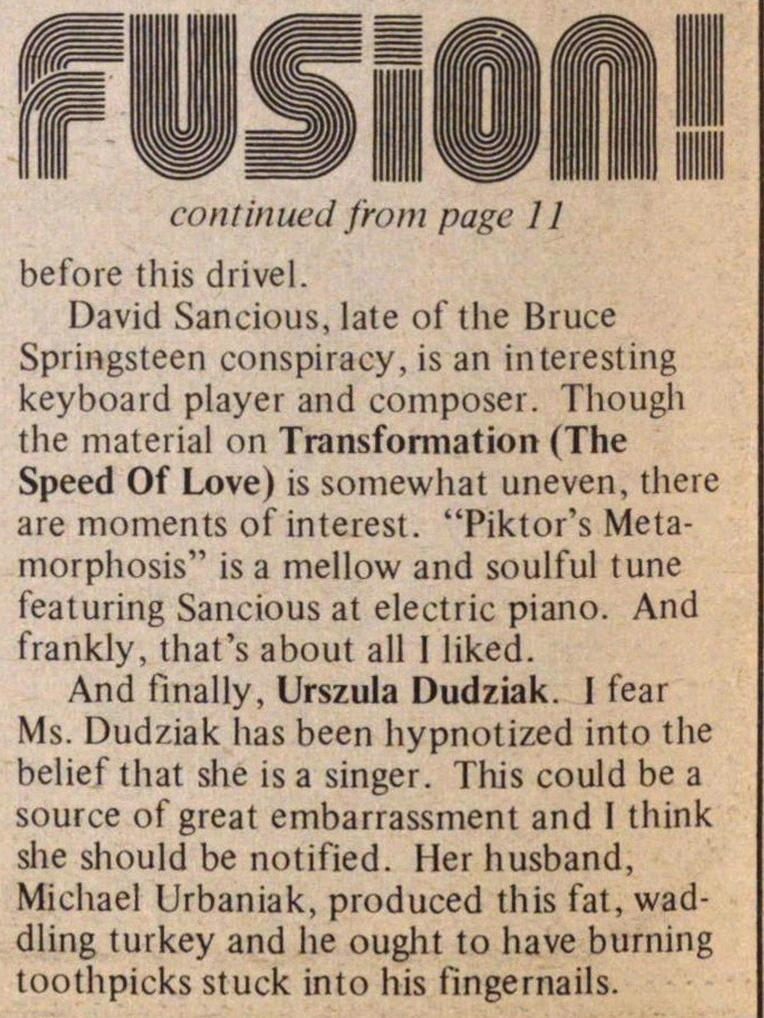 Those geneticists of musical taste, the record companies, often crossbreed their markets to cover more green ground. Hence, the jazz-rock "fusion." Or make that con-fusion.

Everything that makes jazz such compelling and lively music is usually smothered by its relationship with the static rhythmic lock that most rock music has to offer. Jazz music, with its unlimited acoustic textures, is also cheated by the sameness and predictability of electronic instrumentation. It's nicer to be talked to by a saxophone than electrocuted by the 80th century weirdness of synthesizers and digital sequencers.

Nevertheless, the fusion continues to make its appeal to thousands of interested ears that just haven't had the chance to hear the other brand too often. Congress should mandate John Coltrane’s music into the department stores and offices – instead of allowing the illegal and anonymous "muzak." Music that sings cheaply: "Lovely day to buy a car" or "keep your mind on what you’re doing, sport."

On the other hand, sometimes the fusion ain't a bad transfusion, what it is. Getting blown onto your feet by something rock solid and intense like Larry Coryell is a nice diversion, Planet End shows Coryell at home with a number of styles and rhythmic directions.

"Rocks" is done with his "Eleventh House" band, a forward looking den of steady rocking lions, fueled by the limitless punch or Alphonse Mouzon’s drumming. They modulate in and out of a mostly unchanging bass figure and the energy leaps and sparks from Coryell's furious guitar.

The other half of the album features pianist Chick Corea, bassist Miroslav Vitous, drummer Billy Cobham and fellow guitarist Mahavishnu John McLaughlin. The title track, "Planet End," is a freer affair defined occasionally by Miroslav's walking gait. The communication is more at ease here than in the push and shove of the hard electric stuff. World War III panic shares the stage with smoke-filled-room dancing rhythms in this optimistic rendering of the earth's extinction.

"Tyrone," with the same quintet, shimmers and shakes like razor blade jello, oozing and slicing away via Chick's wah-wahed electric piano. Again Miroslav Vitous plays acoustic bass with a full sound and a great pair of ears.

Dave Holland strums a one-lick, funky underpinning to the many shapes of "Back Woods Song." Abercrombie solos inventively, using Hendrix-like chord voicings. Single note runs shift modalities as he creates original lines and clusters. He really has a voice of his own and utilizes many areas of the electric guitar rarely explored.

Jack DeJohnette and Holland engage in a gentle conversation on the pensive composition, "Waiting." Holland's sound is Windex-clean, strutting and bending to Jack's cymbalic accompaniment. Another Abercrombie showcase, "May Dance," begs for a little Elvin Jones punch here and there, but doesn't everything?

Oregon in Concert is an almost-live performance, recorded masterfully before an invited audience at Vanguard's studios. Their music presents many textures, all acoustically produced and played with obvious care and talent. Their sound currently bears a strong Indian influence. Sitar and tabla accompany instruments as varied as the oboe, french horn, violin and congas.

Oregon's music is invitingly casual. They are at home with plaintive rhythms and original tonal colors. "Tryton's Horn" opens with a sitar-tabla dialogue and is joined by Ralph Towner's lyrical acoustic guitar playing. Again this music doesn't bear the twists and surprises of a Mingus chart: a riff turns into a groove turns into a rut.

Mainly, though, this music is a little too humorless and pale. Seriousness I can buy, but these gurus are just a trifle too pained.

Other tunes like "Undertow" or "Yet to Be" are tightly scored and of varying interest. "Undertow" is an exercise in the realm of 20th century classical music and is a stiff affair suited for marionettes and civil war veterans. Colin Walcott's melodic soprano sax is heard on "Yet to Be," above the somewhat limpid piano of Ralph Towner. This album is all about 30 proof, enough to grab a small tingle from, but not enough to make the walls spin around.

Ralph Towner's own album Solstice must be named after the winter solstice, 'cause it's cold and desolate like the Arctic Circle. Nearly all of these European brothers seem to keep their axes in the deep-freeze.

Towner's album also goes for the meditative and laid-back feeling that Oregon is after. Actually, that's a nice way to say that the sparks just don't fly when they play. Towner solos on "Oceanus" while bassist Eberhard Weber takes an occasional and random pluck at his instrument. Jan Garbarek zeroes in with a brief and forgetful tenor sax interlude while drummer Jon Christensen does his best to pay attention.

"Visitation" is one of those sci-fi, otherworldly routines. Spooky and weird it is, music it isn't. "Drifting Petals" has a quiet beauty throughout. Towner plays rhythm guitar beneath Jan Garbarek's quiet flute and Weber's quavering accompaniment.

Al DiMeola's Land of the Midnight Sun, while not a real powerful affair, has a little more meat than bone. Such music, an offshoot of Chick Corea's "Hymn of the Seventh Galaxy" era, is certainly a valuable bridge across the abysmal depths that Frampton, Yes and Gary Wright stalk. Nevertheless, this album sounds like it is skipping half the time. Actually it is just a mass of tired and similar licks one after another. Variety is not in the man's vocabulary.

"The Wizard" opens with a "Sympathy for the Devil" bongo session by Mingo Lewis. DiMeola falls in with his Velveeta-processed guitar sound playing a Zappa-like opening subject. It progresses through several rhythmical permutations, synthesizers join in and play uselessly to the finish.

"Land of the Midnight Sun" is a display of the energy and intensity that Chick used to achieve. Stanley Clarke contributes his sturdy bass playing and Al coaxes a strong sound from an acoustic 12-string guitar.

"Short Tales of the Black Forest," a duet featuring Al and Chick Corea, manages to get off the ground a little. They trade licks, accompany each other alternately and truly listen and communicate. Chick's ideas seem to make Al play a little more than usual. All in all, this album's no real bargain, though.

Harvey Mason is in good company on his Arista release Marching in the Streets. Herbie Hancock produces and plays on a couple of songs. Bennie Maupin, Blue Mitchell and Hubert Laws all drop in for a little while as well.

Harvey Mason is a second magnitude Billy Cobham, a studio drummer in the worst sense of the word. This album really sounds like it was a "recording session," no more. Unrestrained blowing is rarely heard on this mostly written and arranged date.

When Herbie takes over the music gains a much needed funk appeal. "Hopscotch" is such a tune, featuring Herbie's electric piano and Maupin on soprano sax. Herbie's own stuff is better.

"Ballad for Heather," a Mason composition, is a rather pretty interlude on this otherwise formulaic album. Frank Rosolino's trombone mumbles and whines and Herbie creates a sympathetic texture on electric piano. Mason adds a clean and steady pulse beneath. It's all too good to be true, though. The rest of the album continues in the somnambulastic non-funk vein. It would be perfect for an after-game dance at Robot High School.

Bill Connors' solo guitar album on ECM is one out of these ten that you will not be tempted to stop mid-way through the first side. His technique is clean and his sound full-bodied and warm. His compositions are all pretty familiar but allow for protean shifts of texture and color.

"The Highest Mountain" is a beautiful and sober melody, accentuated by obliggato bass passages. Chromatic voicings add another dimension as Connors coaxes an orchestral sound out of the acoustic guitar.

"Frantic Desire" is the up-tempo side of Bill Connors and shows him to be an energetic and feeling soloist. An insistent and chorded rhythm keeps pace with his boplike, single note flurries. Connors is a guitarist to be reckoned with. With petroleum reserves threateningly low, it should be illegal to manufacture L.A. Express albums. Though they are a compelling addition to the already exciting Joni Mitchell, alone they are no more than representatives of the oft-scorned and -imitated "L.A. sound."

It is music unfit to accompany "Kojak" or "Mannix" on the TV. It certainly doesn't belong on the home hi-fi. Give me Henry Mancini

David Sancious, late of the Bruce Springsteen conspiracy, is an interesting keyboard player and composer. Though the material on Transformation (The Speed Of Love) is somewhat uneven, there are moments of interest. "Piktor's Metamorphosis" isa mellow and soulful tune featuring Sancious at electric piano. And frankly, that's about all I liked.

And finally, Urszula Dudziak. I fear Ms. Dudziak has been hypnotized into the belief that she is a singer. This could be a source of great embarrassment and I think she should be notified. Her husband, Micliael Urbaniak, produced this fat, waddling turkey and he ought to have burning toothpicks stuck into his fingernails.