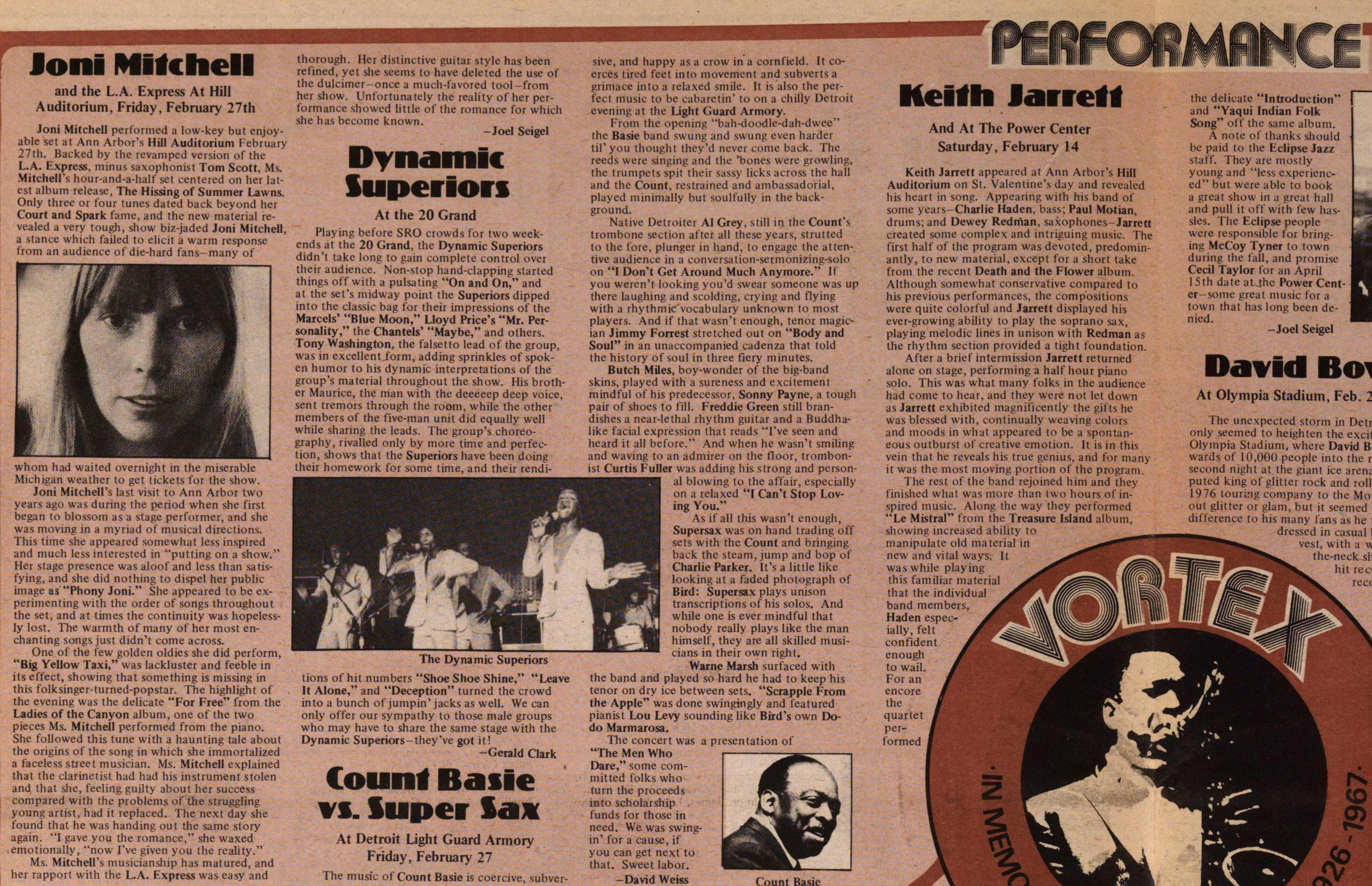 and the L.A. express At Hill Auditorium, Friday, February 27th

Joni Mitchell performed a low-key but enjoyable set at Ann Arbor's Hill Auditorium February 27th. Backed by the revamped version of the L.A. Express, minus saxophonist Tom Scott, Ms. Mitchell's hour-and-a-half set centered on her latest album release, The Hissing of Summer Lawns. Only three or four tunes dated back beyond her Court and Spark fame, and the new material revealed a very tough, show biz-jaded Joni Mitchell, a stance which failed to elicit a warm response from an audience of die-hard fans-many of whom had waited overnight in the miserable Michigan weather to get tickets for the show.

Joni Mitchell's last visit to Ann Arbor two years ago was during the period when she first began to blossom as a stage performer, and she was moving in a myriad of musical directions. This time she appeared somewhat less inspired and much less interested in "putting on a show." Her stage presence was aloof and less than satisfying, and she did nothing to dispel her public image as "Phony Joni." She appeared to be experimenting with the order of songs throughout the set, and at times the continuity was hopelessly lost. The warmth of many of her most enchanting songs just didn't come across.

One of the few golden oldies she did perform, "Big Yellow Taxi," was lackluster and feeble in its effect, showing that something is missing in this folksinger-turned-popstar. The highlight of the evening was the delicate "For Free" from the Ladies of the Canyon album, one of the two pieces Ms. Mitchell performed from the piano. She followed this tune with a haunting tale about the origins of the song in which she immortalized a faceless Street musician. Ms. Mitchell explained that the clarinetist had had his instrument stolen and that she, feeling guilty about her success compared with the problems of the struggling young artist, had it replaced. The next day she found that he was handing out the same story again. "1 gave you the romance," she waxed emotionally, "now I've given you the reality."

Ms. Mitchell's musicianship has matured, and her rapport with the L.A. Express was easy and thorough. Her distinctive guitar style has been refined, yet she seems to have deleted the use of the dulcimer- once a much-favored tool-from her show. Unfortunately the reality of her performance showed little of the romance for which she has become known.