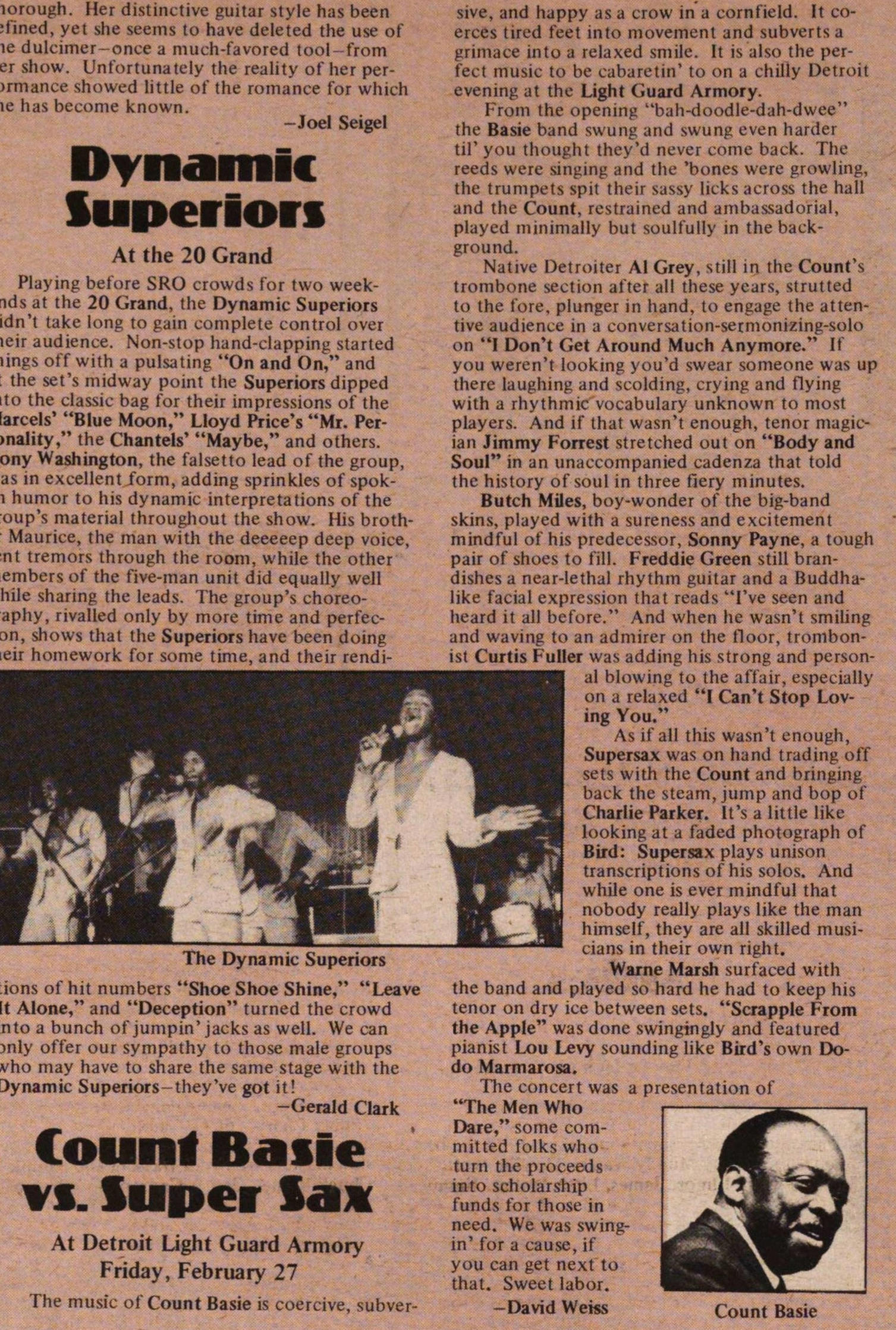 The music of Count Basie is coercive, subversive, and happy as a crow in a cornfield. It coerces tired feet into movement and subverts a grintace into a relaxed smile. It is also the perfect music to be cabaretin' to on a chilly Detroit evening at the Light Guard Armory.

From the opening "bah-doodle-dah-dwee" the Basie band swung and swung even harder til' you thought they'd never come back. The reeds were singing and the 'bones were growling, the trumpets spit their sassy licks across the hall and the Count, restrained and ambassadorial, played minimally but soulfully in the background.

Native Detroiter Al Grey, still in the Count's trombone section alter all these years, strutted to the fore. plunger in hand, to engage the attentive audience in a Conversation-Sermonizing-solo on "I Don't Get Around Much Anymore." If you weren't looking you'd swear someone was up there laughing and scolding, crying and flying with a rhythmic vocabulary unknown to most players. And if that wasn't enough, tenor magician Jimmy Forrest stretched out on "Body and Soul" in an unaccompanied cadenza that told the history of soul in three fïery minutes.

Butch Miles, boy-wonder of the big-band skins, played with a sureness and excitement mindful of his predecessor, Sonny Payne, a tough pair of shoes to fill. Freddie Green still brandishes a near-lethal rhythm guitar and a Buddha-like facial expression that reads "I've seen and heard it all before." And when he wasn't smiling and waving to an admirer on the floor, trombonist Curtis Fuller was adding his strong and personal blowing to the affair, especially on a relaxed "I Can't Stop Loving You."

As if all this wasn't enough, Supersax was on hand trading off sets with the Count and bringing back the steam, jump and bop of Charlie Parker. It's a little like looking at a faded photograph of Bird: Supersax plays unison transcriptions of his solos. And while one is ever mindful that nobody really plays like the man himself, they are all skilled musicians in their own right. Warne Marsh surfaced with the band and played so hard he had to keep his tenor on dry ice between sets. "Scrapple From the Apple" was done swingingly and leatured pianist Lou Levy sounding like Bird's own Dodo Marmarosa.

The concert was a presentation of "The Men Who Dare," some committed folks who turn the proceeds into scholaiship funds for those in need. We was swingin' for a cause, if you can get next to that. Sweet labor.