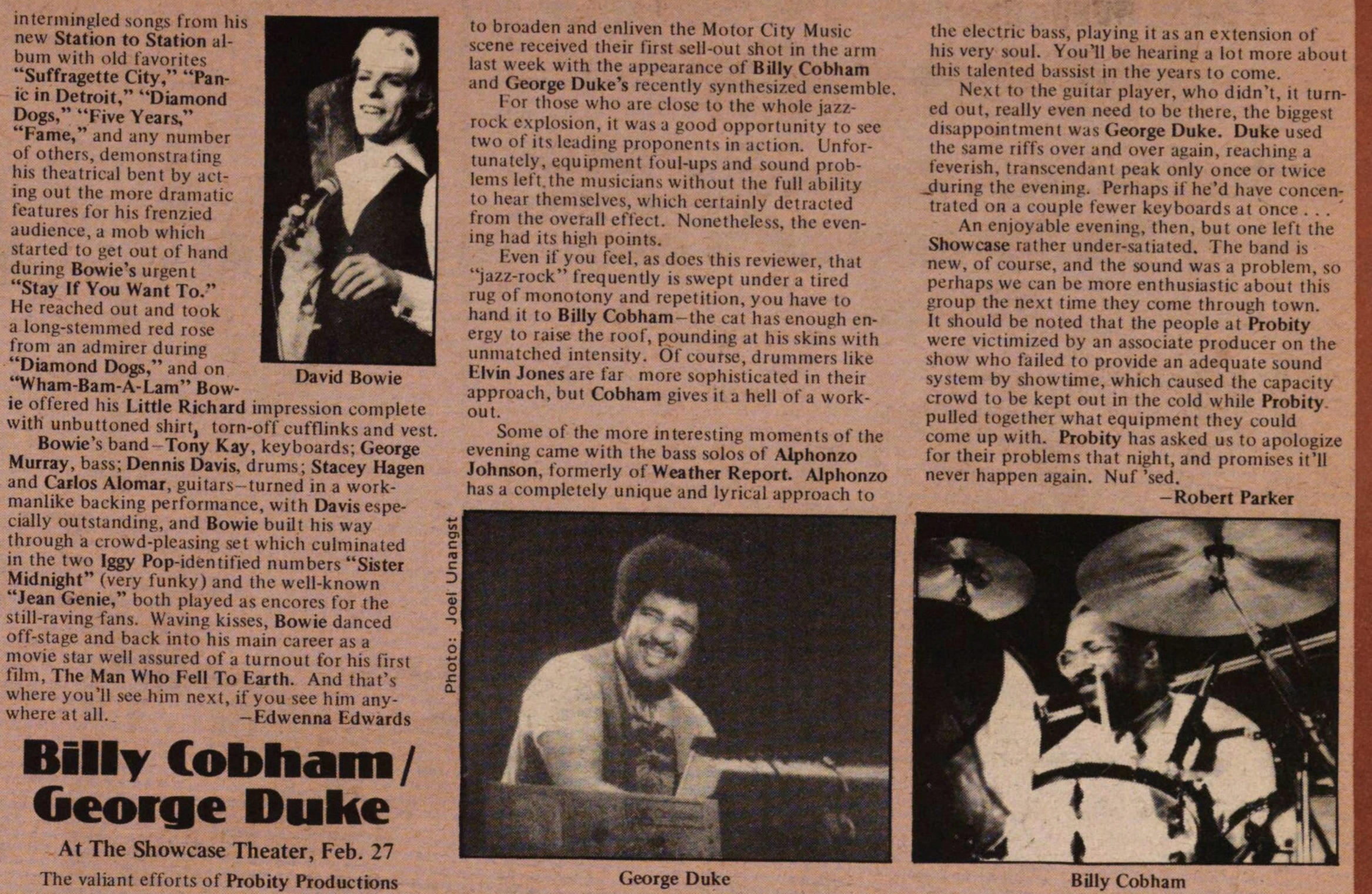 At The Showcase Theater, Feb. 27

The valiant efforts of Probity Productions to broaden and enliven the Motor City Music scene received their first sell-out shot in the arm last reek with the appearance of Billy Cobham and George Duke's recently synthesized ensemble.

For those who are close to the whole jazz-rock explosion, it was a good opportunity to sec two of its leading proponents in action. Unfortunately, equipment foul-ups and sound problems left the musicians without the full ability to hear themselves, which certainly detracted from the overall effect. Nonetheless, the evening had its high points.

Even if you feel, as does this reviewer, that "jazz-rock" frequently is swept under a tired rug of monotony and repetition, you have to hand it to Billy Cobham-the cat has enough energy to raise the roof, pounding at his skins with unmatched intensity. Of course, drummers like Elvin Jones are far more sophisticated in their approach, but Cobham gives it a hell of a workout.

Some of the more interesting moments of the evening came with the bass solos of Alphonzo Johnson, formerly of Weather Report. Alphonzo has a completely unique and lyrical approach to the eleetric bass, playing it as an extension of his very soul. You'll be hearing a lot more about this talented bassist in the years to come.

Next to the guitar player, who didn't, it turned out, really even need to be there, the biggest disappointment was George Duke. Duke used the same riffs over and over again, reaching a feverish, transcendent peak only once or twice during the evening. Perhaps it he'd have concentrated on a couple fewer keyboards at once...

An enjoyable evening, then, but one left the Showcase rather under-satiated. The band is new, of course, and the sound was a problem, so perhaps we can be more enthusiastic about this group the next time they come through town. It should be noted that the people at Probity were victimized by an associate producer on the show who failed to provide an adequate sound system by show time, which caused the capacity crowd to be kept out in the cold while Probity pulled together what equipment they could come up with. Probity has asked us to apologize for their problems that night, and promises it'll never happen again. Nuf 'sed.