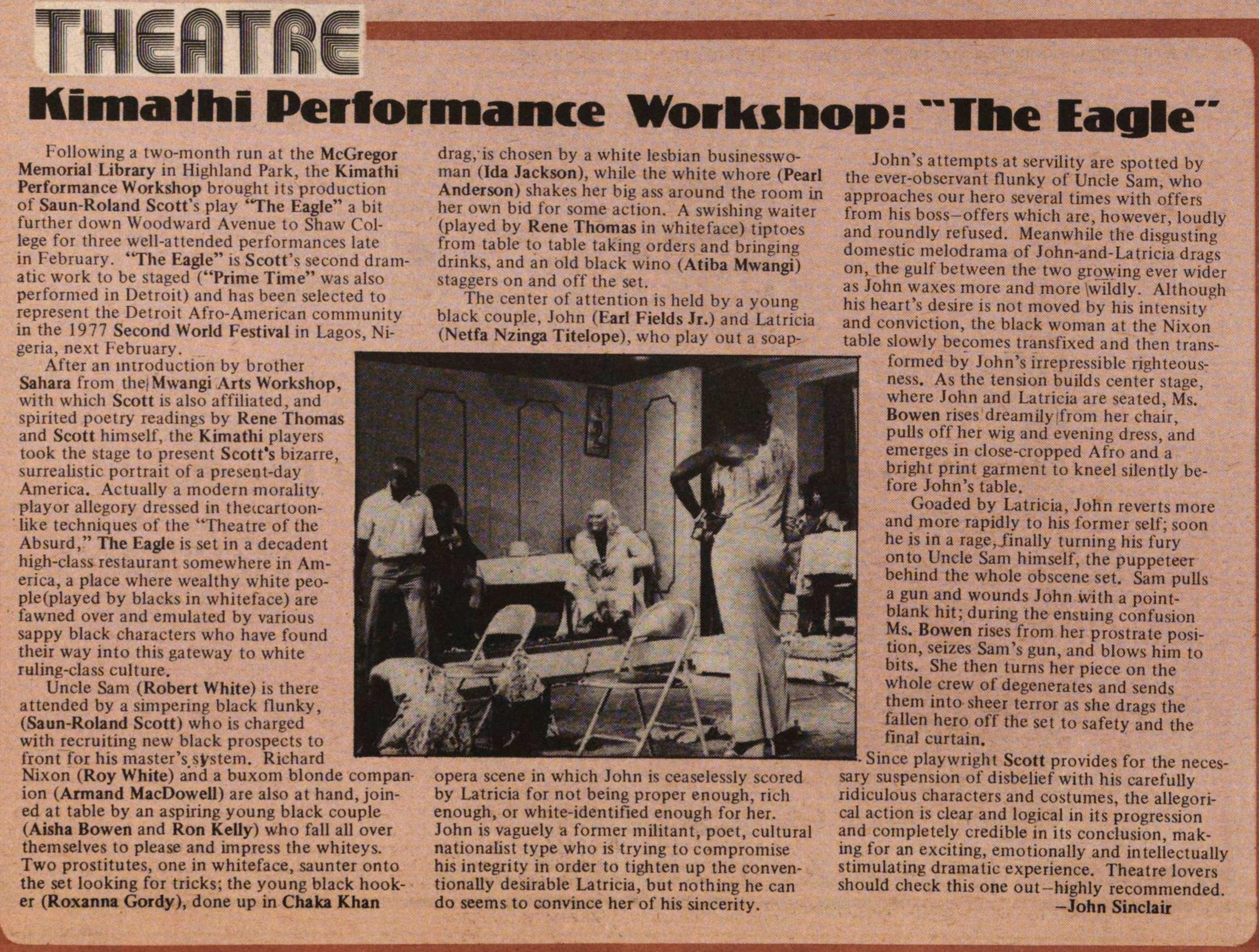 Following a two-month run at the McGregor Memorial Library in Highland Park, the Kimathi Performance Workshop brought its production of Saun-Roland Scott's play "The Eagle" a bit further down Woodward Avenue to Shaw College for three weil-attended performances late in February. "The Eagle" is Scott's second dramatic work to be staged ("Prime Time" was also performed in Detroit) and has been selected to represent the Detroit Afro-American community in the 1977 Second World Festival in Lagos, Nigeria, next February.

After an introduction by brother Sahara from the Mwangi Arts Workshop, with which Scott is also affiliated, and spirited poetry readings by Rene Thomas and Scott himself, the Kimathi players took the stage to present Scott's bizarre, surrealistic portrait of a present day America. Actually a modern morality play or allegory dressed in the cartoon-like techniques of the "Theatre of the Absurd," The Eagle is set in a decadent high-class restaurant somewhere in America, a place where wealthy white peo ple(played by blacks in whiteface) are fawned over and emulated by various sappy black characters who have found their way into this gateway to white ruling-class culture.

Uncle Sam (Robert White) is there attended by a simpering black flunky, (Saun-Roland Scott) who is charged with recruiting new black prospects to front for his master's system. Richard Nixon (Roy White) and a buxom blonde companion (Armand MacDowell) are also at hand, joined at table by an aspiring young black couple (Aisha Bowen and Ron Kelly) who fall all over themselves to please and impress the whiteys. Two prostitutes, one in whiteface, saunter onto the set looking for tricks; the young black hooker (Roxanna Gordy), done up in Chaka Khan drag, is chosen by a white lesbian businesswoman (Ida Jackson), while the white whore (Pearl Anderson) shakes her big ass around the room in her own bid tot some action. A swishing waiter (played by Rene Thomas in whiteface) tiptoes from table to table taking orders and bringing drinks, and an old black wino (Atiba Mwangi) staggers on and off the set.

The center of attention is held by a young black couple, John (Earl Fields Jr.) and Latricia (Netfa Ninga Titelope), who play out a opera scene in which John is ceaselessly scored by Latricia for not being proper enough, rich enough, or white-identified enough for her. John is vaguely a former militant, poet, cultural nationalist type who is trying to compromise his integrity in order to tighten up the conventionally desirable Latricia, but nothing he can do seems to convince her of his sincerity.

John's attempts at servility are spotted by the ever-observant flunky of Uncle Sam, who approaches our hero several times with offers from his boss-offers which are, however, loudly and roundly refused. Meanwhile the disgusting domestic melodrama of John-and-Latricia drags on, the gulf between the two growing ever wider as John waxes more and more wildly. Although his heart's desire is not moved by his intensity and conviction, the black woman at the Nixon table slowly becomes transfixed and then formed by John's irrepressiblc righteousness. As the tension builds center stage, where John and Latricia are seated, Ms. Bowen rises dreamily from her chair, pulls off her wig and evening dress, and emerges in close-cropped Afro and a bright print garment to kneel silently before John's table.

Goaded by Latricia, John reverts more and more rapidly to his former self; soon he is in a rage finally turning his fury onto Uncle Sam himself, the puppeteer behind the whole obscene set. Sam pulls a gun and wounds John with a pointblank hit; during the ensuing confusion Ms. Bowen rises from her prostrate position, seizes Sam 's gun, and blows him to bits. She then turns her piece on the whole crew of degenerates and sends them into sneer terror as she drags the fallen hero off the set to safety and the final curtain.

Since playwright Scott provides for the necessary suspension of disbelief  with his carefully ridiculous characters and costumes, the allegorical action is clear and logical in its progression and completely credible in its conclusion, making for an exciting, emotionally and intellectually stimulating dramatic experience. Theatre lovers should check this one out-highly recommended.