The Right To Health: Conspiracy Against The Poor 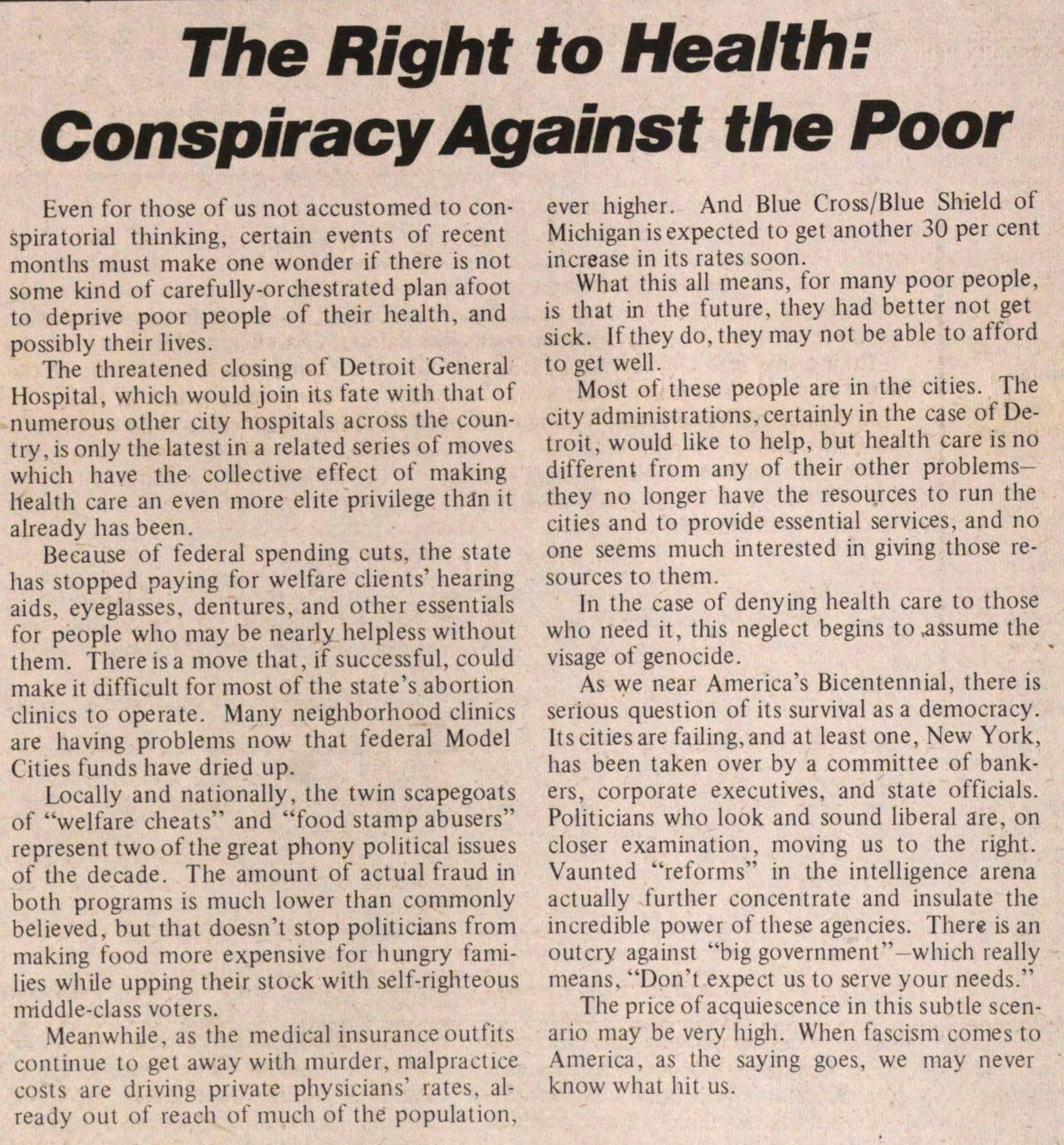 Even for those of us not accustomed to conspiratorial thinking, certain events of recent months must make one wonder if there is not some kind of carefully-orchestrated plan afoot to deprive poor people of their health, and possibly their lives. The threatened closing of Detroit General Hospital, which would join its fate with that of numerous otlier city hospitals across the country , is only the latest in a related series of moves which have the collective effect of making health care an even more elite privilege thán it already has been. Because of federal spending cuts. the state has stopped paying for welfare clients' hearing aids, eyeglasses, dentures, and other essentials for people who may be nearly helpless without them. There isa move that, if successful, could make it difficult for most of the state's abortion clinics to opérate. Many neighborhood clinics are having problems now that federal Model Cities funds have dried up. Locally and nationally, the twin scapegoats of "welfare cheats" and "food stamp abusers" represent two of the great phony political issues of the decade. The amount of actual fraud in both programs is much lower than commonly believed, but that doesn't stop politicians from making food more expensive for hungry families while upping their stock with self-righteous middle-class votéis. Meanwhile, as the medical insuranceoutfits continue to get away with murder, malpractice costs are driving private physicians' rates, already out of reach of much of the population. ever higher. And Blue CrossBlue Shield of Michigan isexpected to get another 30 per cent increase in its rates soon. What this all means, for many poor people, is that in the future, they had better not get sick. If they do, they may not be able to afford to get well. Most of these people are in the cities. The city administrations, certainly in the case of Detroit, would like to help, but health care is no different from any of their other problemsthey no longer have the resources to run the cities and to provide essential services, and no one seems much interested in giving those resources to them. In the case of denying health care to those who need it, this neglect begins toassume the visage of genocide. As we near America's Bicentennial, there is serious question of its survival as a democracy. lts cities are failing,and at least one, New York, has been taken over by a committee of bankers, corporate executives, and state officials. Politicians who look and sound liberal are, on closer examination, moving us to the right. Vaunted "reforms" in the intelligence arena actually further concéntrate and insulate the incredible power of these agencies. There is an outcry against "big government"-which really means, "Don't expect us to serve your needs." The price of acquiescence in this subtle scenario may be very high. When fascism comes to America, as the saying goes, we may never knovv whal hit us.