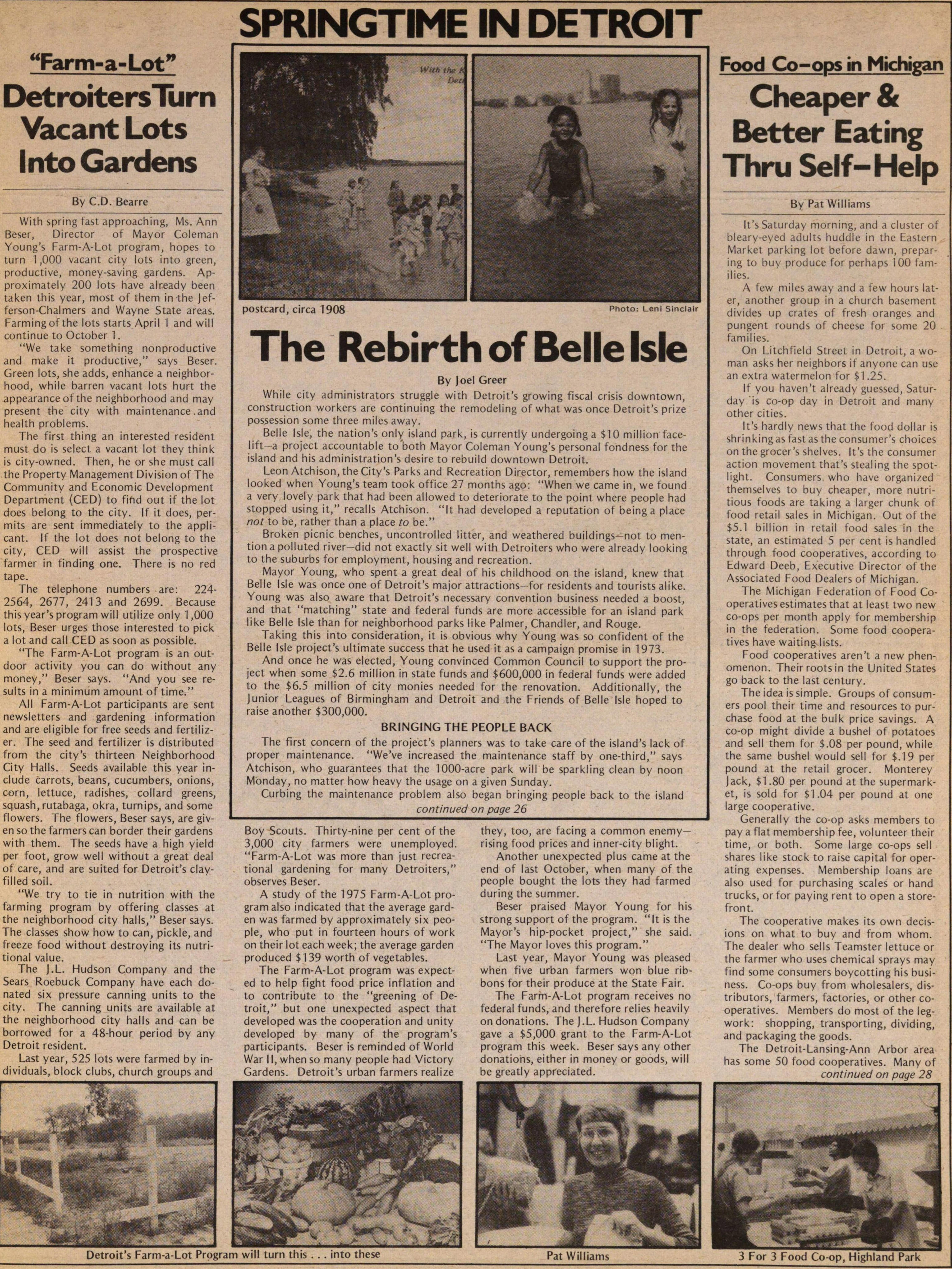 Beser, Director of Mayor Coleman Young's Farm-A-Lot program, hopes to turn 1 ,000 vacant city lots into green, productive, money-saving gardens. Approximately 200 lots have already been taken this year, most of them in the jefferson-Chalmers and Wayne State areas. Farmingof the lots starts April 1 and will continue to October 1 . "We take something nonproductive and make it productive," says Beser. Green lots, she adds, enhance a neighborhood, while barren vacant lots hurt the appearance of the neighborhood and may present the city with maintenance .and health problems. The first thing an interested resident must do is select a vacant lot they think is city-owned. Then, he or she must cali the Property Management División of The Community and Economie Development Department (CED) to fihd out if the lot does belong to the city. If it does, permits are sent mmediately to the applicant. If the lot does not belong to the city, CED will assist the prospective farmer in finding one. There is no red tape. The telephone numbers are: 2242564, 2677, 2413 and 2699. Because this year's program will utilize only 1,000 lots, Beser urges those interested to piek a lot and cali CED as soon as possible. "The Farm-A-Lot program is an outdoor activity you can do without any money," Beser says. "And you see results in a minimum amount of time." All Farm-A-Lot participants are sent newsletters and gardening nformation and are eligible for free seeds and fertilizer. The seed and fertilizer is distributed from the city's thirteen Neighborhood City Halls. Seeds available this year nclude carrots, beans, cucumbers, onions, corn, lettuce, radishes, collard greens, squash, rutabaga, okra, tumips, and some flowers. The flowers, Beser says, are given so the farmers can border the ir gardens with them. The seeds have a high yield per foot, grow well without a great deal of care, and are suited for Detroit's clayfilled soil. "We try to tie in nutrition with the farming program by offering classes at the neighborhood city halls," Beser says. The classes show how to can, pickle, and freeze food without destroying ts nutritional value. The j.L. Hudson Company and the Sears Roebuck Company have each donated six pressure canning units to the city. The canning units are available at the neighborhood city halls and can be borrowed for a 48-hour period by any Detroit resident. Last year, 525 lots were farmed by individuáis, block clubs, church eroups and Boy Scouts. Thirty-nine per cent of the 3,000 city farmers were unemployed. "Farm-A-Lot was more than just recreational gardening for many Detroiters," observes Beser. A study of the 1975 Farm-A-Lot program atso ndicated that the average garden was farmed by approximately six people, who put n fourteen hours of work on their lot each week; the average garden produced $139 worth of vegetables. The Lot program was expected to help fight food price nflation and to contribute to the "greening of Detroit," but one unexpected aspect that deveioped was the cooperation and unity developed by many of the program's participants. Beser is reminded of World War II, when so many people had Victory Gardens. Detroit's urban farmers realize they, too, are facmg a common enemy- rising food prices and inner-city blight. Another unexpected plus carne at the end of last October, when many of the people bought the lots they had farmed during the summer. Beser praised Mayor Young for his strong support of the program. "It s the Mayor's hip-pocket project," she said. "The Mayor loves this program." Last year, Mayor Young was pleased when five urban farmers won blue ribbons for their produce at the State Fair. The Farm-A-Lot program receives no federal funds, and therefore relies heavily ondonations. The J.L. Hudson Company gave a $5,000 grant to the Farm-A-Lot program this week. Beser says any other donatiohs, either in money or goods, will be greatly appreciated.