White Minority Rale In Rhodesia: Its Days Are Numbered 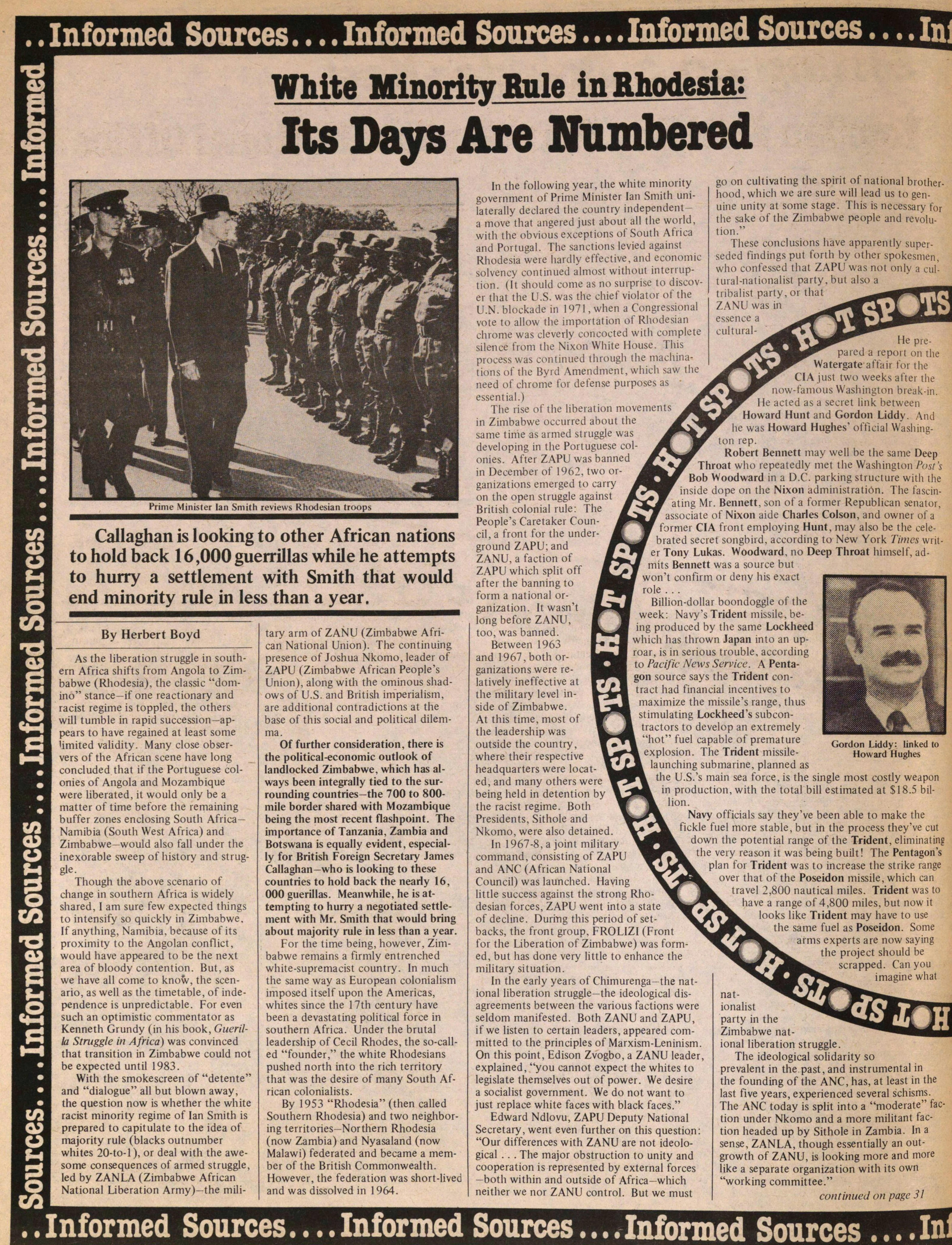 White Minority Rule in Rhodesia:
Its Days Are Numbered

Callaghan is looking to other African nations to hold back 16,000 guerrillas while he attempts to hurry a settlement with Smith that would end minority rule in less than a year.

As the liberation struggle in southern Africa shifts from Angola to Zimbabwe (Rhodesia), the classic “domino” stance – If one reactionary and racist regime is toppled, the others will tumble in rapid succession – appears to have regained at least some limited validity. Many close observers of the African scene have long concluded that if the Portuguese colonies of Angola and Mozambique were liberated, it would only be a matter of time before the remaining buffer zones enclosing South Africa/Namibia (South West Africa) and Zimbabwe – would also fall under the inexorable sweep of history and struggle.

Though the above scenario of change in southern Africa is widely shared, I am sure few expected things to intensify so quickly in Zimbabwe. If anything, Namibia, because of its proximity to the Angolan conflict, would have appeared to be the next area of bloody contention. But, as we have all come to know, the scenario, as well as the timetable, of independence is unpredictable. For even such an optimistic commentator as Kenneth Grundy (in his book, Guerilla Struggle in Africa) was convinced that transition in Zimbabwe could not be expected until 1983.

With the smokescreen of “detente” and “dialogue” all but blown away, the question now is whether the white racist minority regime of Ian Smith is prepared to capitulate to the idea of majority rule (blacks outnumber whites 20-to-1), or deal with the awesome consequences of armed struggle, led by ZANLA (Zimbabwe African National Liberation Army) – the military arm of ZANU (Zimbabwe African National Union). The continuing presence of Joshua Nkomo, leader of ZAPU (Zimbabwe African People’s Union), along with the ominous shadows of U.S. and British imperialism, are additional contradictions at the base of this social and political dilemma.

Of further consideration, there is the political-economic outlook of landlocked Zimbabwe, which has always been integrally tied to the surrounding countries – the 700- to 800-mile border shared with Mozambique being the most recent flashpoint. The importance of Tanzania, Zambia and Botswana is equally evident, especially for British Foreign Secretary James Callaghan – who is looking to these countries to hold back the nearly 16,000 guerillas. Meanwhile, he is attempting to hurry a negotiated settlement with Mr. Smith that would bring about majority rule in less than a year.

For the time being, however, Zimbabwe remains a firmly entrenched white-supremacist country. In much the same way as European colonialism imposed itself upon the Americas, whites since the 17th century have been a devastating political force in southern Africa. Under the brutal leadership of Cecil Rhodes, the so-called “founder,” the white Rhodesians pushed north into the rich territory that was the desire of many South African colonialists.

By 1953 “Rhodesia” (then called Southern Rhodesia) and two neighboring territories – Northern Rhodesia (now Zambia) and Nyasaland (now Malawi) federated and became a member of the British Commonwealth. However, the federation was short-lived and was dissolved in 1964.

In the following year, the white minority government of Prime Minister Ian Smith unilaterally declared the country independent a move that angered just about all the world, with the obvious exceptions of South Africa and Portugal. The sanctions levied against Rhodesia were hardly effective, and economic solvency continued almost without interruption. (It should come as no surprise to discover that the U.S. was the chief violator of the U.N. blockade in 1971, when a Congressional vote to allow the importation of Rhodesian chrome was cleverly concocted with complete silence from the Nixon White House. This process was continued through the machinations of the Byrd Amendment, which saw the need of chrome for defense purposes as essential.)

The rise of the liberation movements in Zimbabwe occurred about the same time as armed struggle was developing in the Portuguese colonies. After ZAPU was banned in December of 1962, two organizations emerged to carry on the open struggle against British colonial rule: The People’s Caretaker Council, a front for the ground ZAPU; and ZANU, a faction of ZAPU which split off after the banning to form a national organization. It wasn’t long before ZANU, too, was banned.

Between 1963 and 1967, both organizations were relatively ineffective at the military level inside of Zimbabwe. At this time, most of the leadership was outside the country, where their respective headquarters were located, and many others were being held in detention by the racist regime. Both Presidents, Sithole and Nkomo, were also detained.

In 1967-8, a joint military command, consisting of ZAPU and ANC (African National Council) was launched. Having little success against the strong Rhodesian forces, AFU went into a state of decline. During this period of setbacks, the front group, FROLIZI (Front for the Liberation of Zimbabwe) was formed, but has done very little to enhance the military situation.

In the early years of Chimurenga – the national liberation struggle – the ideological disagreements between the various factions were seldom manifested. Both ZANU and ZAPU, if we listen to certain leaders, appeared committed to the principles of Marxism-Leninism. On this point, Edison Zvogbo, a ZANU leader, explained, “you cannot expect the whites to legislate themselves out of power. We desire a socialist government. We do not want to just replace white faces with black faces.”

Edward Ndlovu, ZAPU Deputy National Secretary, went even further on this question: “Our differences with ZANU are not ideological . . . The major obstruction to unity and cooperation is represented by external forces – both within and outside of Africa – which neither we nor ZANU control. But we must go on cultivating the spirit of national brotherhood, which we are sure will lead us to genuine unity at some stage. This is necessary for the sake of the Zimbabwe people and revolution.”

The ideological solidarity so prevalent in the past, and instrumental in the founding of the ANC, has, at least in the last five years, experienced several schisms. The ANC today is split into a “moderate” faction under Nkomo and a more militant faction headed up by Sithole in Zambia. In a sense, ZANLA, though essentially an outgrowth of ZANU, is looking more and more like a separate organization with its own “working committee.”