Marcus Belgrave And The Jazz Development Workshop Passing It Along 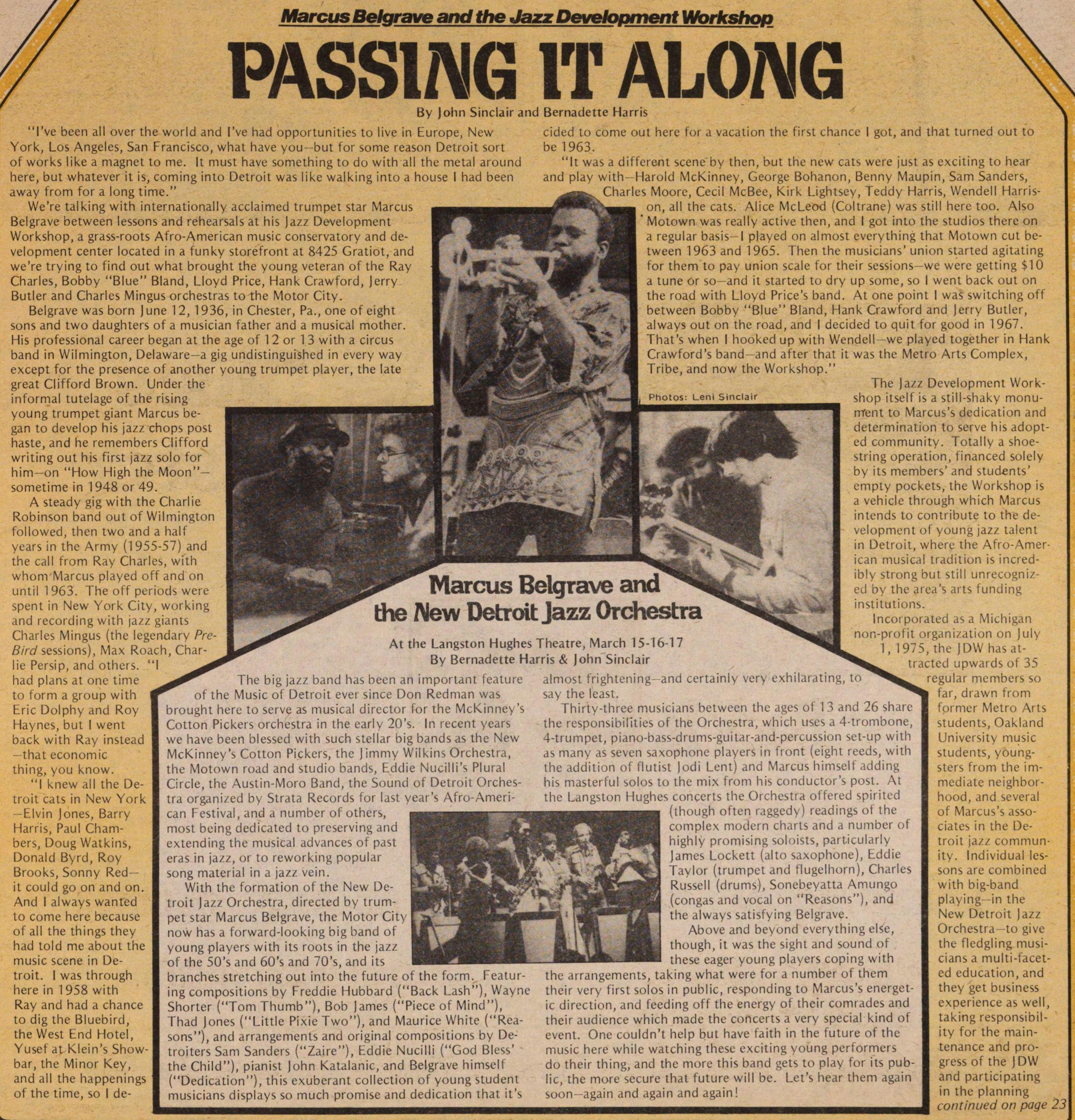 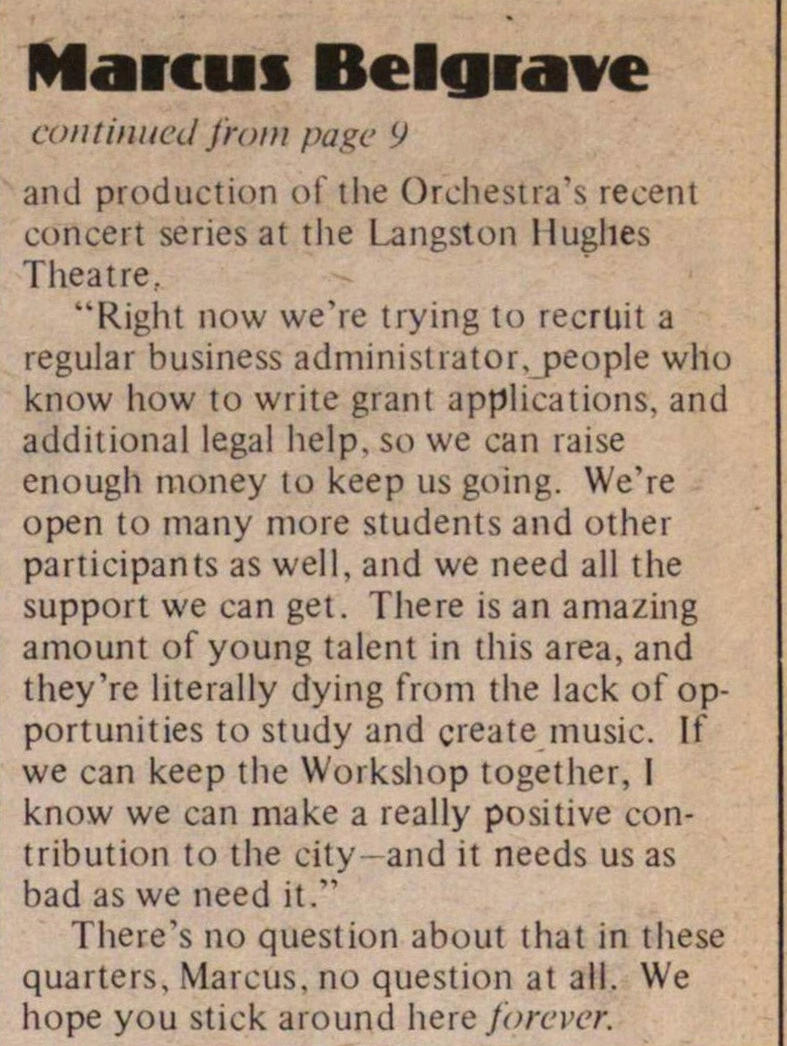 "l've been all over the worid and l've had opportunities to live n Europe, New York, Los Angeles, San Francisco, what have you- but for some reason Detroit sort of works like a magnet to me. It must have something to do withall the metal around here, but whatever it is, coming into Detroit was like walking into a house I had been away from for a long time." We're talking with nternationally acclaimed trumpet star Marcus Belgrave between lessons and rehearsals at his Jazz Development Workshop, a grass-roots Afro-American music conservatory and development center located in a funky storefront at 8425 Gratiot, and we're trying to find out what brought the young veteran of the Ray Charles, Bobby "Blue" Bland, Lloyd Price, Hank Crawford, ]erry Butler and Charles Mingus orchestras to the Motor City. Belgrave was bom June 12, 1936, in Chester, Pa., one of eight sons and two daughters of a musician father and a musical mother. His professional career began at the age of 1 2 or 1 3 with a circus band in Wilmington, Delaware- a gig undistinguished in every way except for the presence of another young trumpet player, the late great Clifford Brown. Under the informal tutelage of the rising young trumpet giant Marcus began to develop his jazz chops post haste, and he remembers Clifford writing out his first jazz solo for him- on "How High the Moon"- sometime in 1948 or 49. A steady gig with the Charlie Robinson band out of Wilmington followed, then two and a half years in the Army (1955-57) and the cali from Ray Charles, with whonrMarcus played off and on until 1963. The off periöds were spent in New York City, working and recording with jazz giants Charles Mingus (the legcndary PreBird sessions), Max Roach, lie Persip, and others. "I had plans at one time to f'orm a group with Eric Dolphy and Roy Haynes, but I went back with Ray instead -that economie thing, you know. "I knew all the Detroit cats in New York -Elvin Jones, Barry Harris, Paul Chambers, Doug Watkins, Donald Byrd, Roy Brooks, Sonny Red- it could go on and on. And I always wanted to come here because of all the things they had told me about the music scène in Detroit. I was through here in 1958 with Ray and had a chance to dig the Bluebird, the West End Hotel, Yusef at Klein's Showbar, the Minor Key, and all the happenings of the time, so I cided to come out here for a vacaüon the first chance I got, and that turned out to be 1963. "It was a different scène by then, but the new cats were just as exciting to hear and play with- Harold McKinney, George Bohanon, Benny Maupin, Sam Sanders, Charles Moore, Cecil McBec, Kirk Ughtsey, Teddy Harris, Wendell on, all the cats. Alice McLeod (Coltrane) was still here too. Also Motown was really active then, and I got nto the studios there on a regular I played on almost everything that Motown cut between 1963 and 1965. Then the musicians' union started agitating for them to pay union scale for their sessions- we were getting $10 a tune or so- and it started to dry up some, so I went back out on the road with Lloyd Price's band. At one point I was switching off between Bobby "Blue" Bland, Hank Crawford and )erry Butler, always out on the road, and I decided to quit for good in 1 967. That's when I hooked up with Wendell- we played together in Hank Crawford's band-and after that it was the Metro Arts Complex, Tribe, and now the Workshop." The Jazz Development Workshop tself is a still-shaky monurrrent to Marcus's dedication and determination to serve his adopted commumty. Totally a shoestring operation, imanced solely by its members' and students' empty pockets, the Workshop is a vehicle through which Marcus intends to contribute to the development of young jazz talent n Detroit, where the Afro-American musical tradition s incredibly strong but still unrecognied by the arca 's arts funding institutions. Incoi porated as a Michigan non-profit organization on July 1, 1975, the JDWhasattracted upwards of 35 regular mcmbers so far, dtawn trom fprmer Metro Arts students, Oakland University music students, youngsters from the mmediate neighborhood, and several of Marcus's associates n the Detroit jazz community. Individual lessons are combined with big-band playing- in the New Detroit Jazz Orchestra- to give the fledgling musicians a multi-faceted education, and they get business experience as well, taking responsibility for the maintenance and progress of the JDW and participating in the planning continued on page 23 Maicui Belgrave continued from page 9 and production of the Orchesua's recent concert series at the Langston Hughes Theatre: "Right now weYe trying to recruit a regular business administrator, people who know how to write grant applications, and additional lega! lielp. so we can raise enough money to keep usgoing. We're open to many more students and other participants as well, and we need all the support we can get. There is an amazing amount of young talent in (liis area, and they're literally dying from the lack of opportunities to study and créate music. If we can keep the Workshop together, I know we can make a really positive contribution to the city -and it needs us as bad as we need it." There's no question about that in these quarters, Marcus. no question at all. We hope you stick around henforevef.