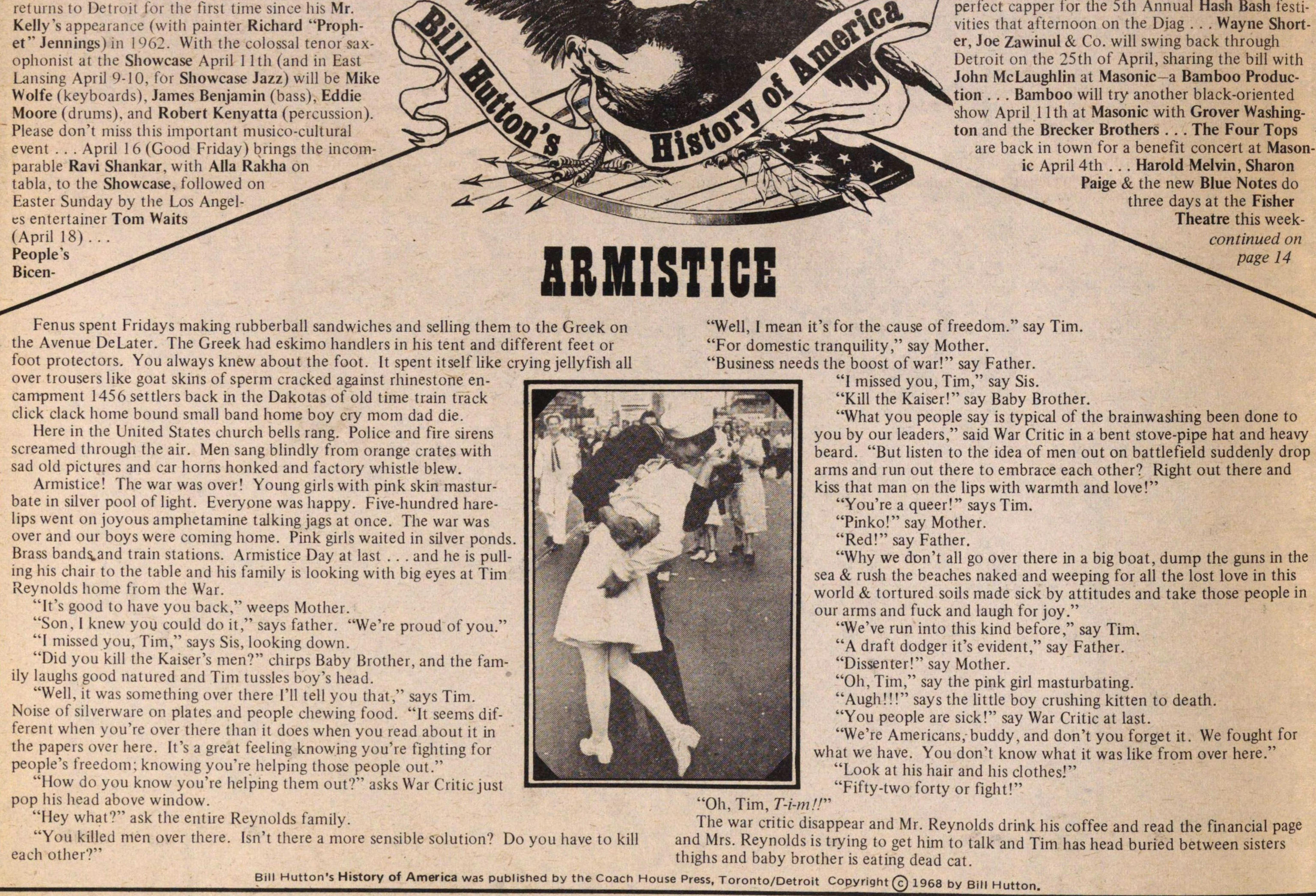 Fenus spent Fridays making rubberball sandwiches and selling them to the Greek on the Avenue DeLater. The Greek had eskimo handlers in his tent and different feet or foot protectors. You always knew about the foot. It spent itself like crying jellyfish all over trousers like goat skins of sperm cracked against rhinestone encampment 1456 settlers back in the Dakotas of old time train track click clack home bound small band home boy cry mom dad die.

"It's good to have you back," weeps Mother.

"I missed you, Tim," says Sis, looking down.

"Did you kill the Kaiser's men?" chirps Baby Brother, and the family laughs good natured and Tim tussles boy's head.

"Well, it was something over there I'll tell you that," says Tim. Noise of silverware on plates and people chewing food. "It seems different when you're over there than it does when you read about it in the papers over here. It's a great feeling knowing you're fighting for people's freedom; knowing you're helping those people out."

"How do you know you're helping them out?" asks War Critic just pop his head above window.

You killed men over there. Isn't there a more sensible solution? Do you have to kill each other?"

"Well, I mean it's for the cause of freedom." say Tim.

"What you people say is typical of the brainwashing been done to you by our leaders," said War Critic in a bent stove-pipe hat and heavy beard. "But listen to the idea of men out on battlefield suddenly drop arms and run out there to embrace each other? Right out there and kiss that man on the lips with warmth and love!"

"Why we don't all go over there in a big boat, dump the guns in the sea & rush the beaches naked and weeping for all the lost love in this world & tortured soils made sick by attitudes and take those people in our arms and fuck and laugh for joy."

"We've run into this kind before," say Tim.

"You people are sick!" say War Critic at last.

"We're Americans, buddy, and don't you forget it. We fought for what we have. You don't know what it was like from over here."

"Look at his hair and his clothes!"

The war critic disappear and Mr. Reynolds drink his coffee and read the financial page and Mrs. Reynolds is trying to get him to talk and Tim has head buried between sisters thighs and baby brother is eating dead cat.