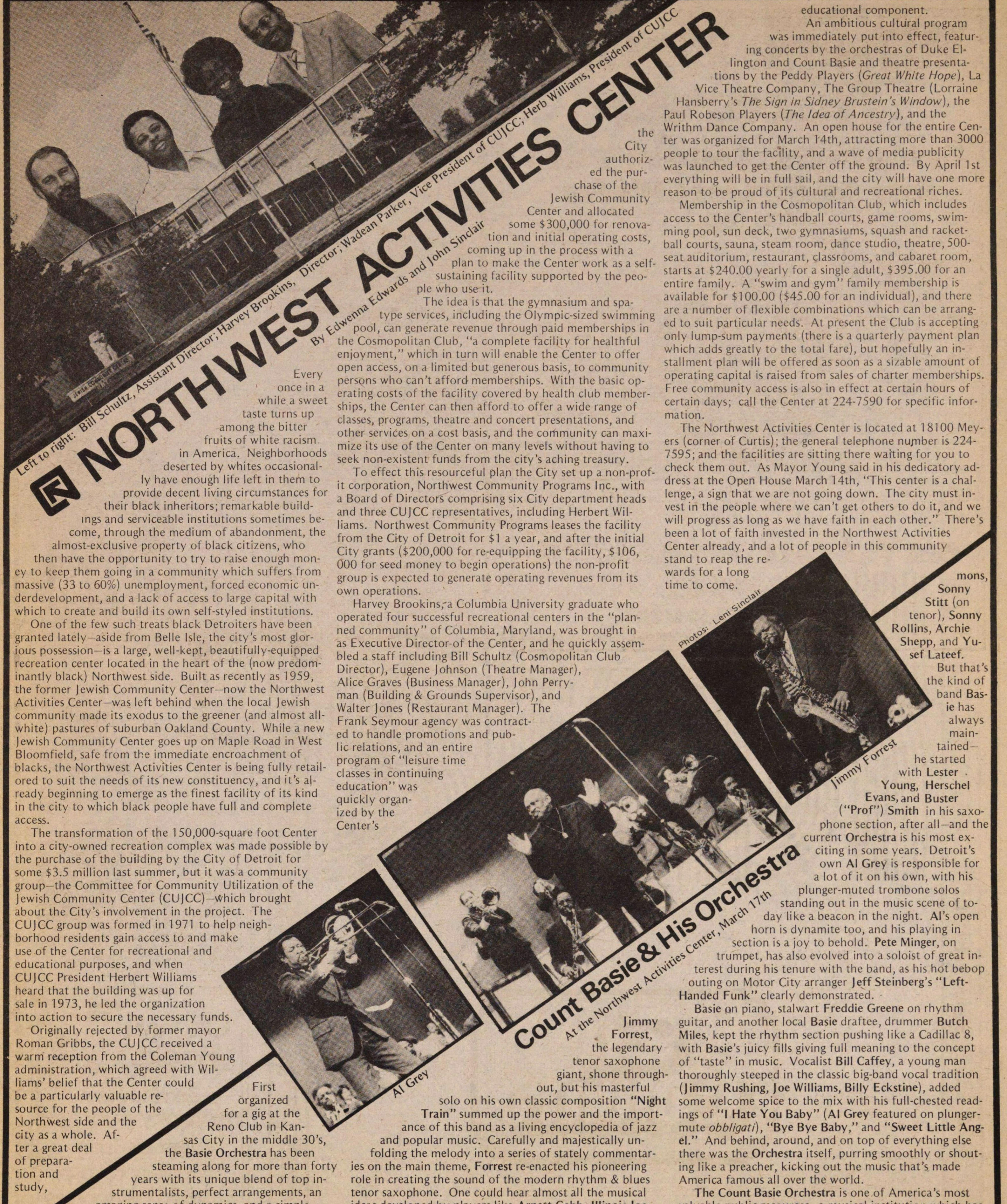 Every once in a while a sweet taste turns up among the bitter fruit of white racism in America. Neighborhoods deserted by whites occasionally have enough life left in them to provide decent living circumstances for their black inheritors; remarkable buildings and serviceable institutions sometimes become, through the medium of abandonment, the almost-exclusive property of black citizens, who then have the opportunity to try to raise enough money to keep them going in a community which suffers from massive (33 to 60%) unemployment, forced economic underdevelopment, and a lack of access to large capital with which to create and build its own self-styled institutions.

One of the few such treats black Detroiters have been granted lately - aside from Belle Isle, the city's most glorious possession - is a large, well-kept, beautifully-equipped recreation center located n the heart of the (now predominantly black) Northwest side. Built as recently as 1959, the former jewish Community Center - now the Northwest Activities Center - was left behind when the local Jewish community made its exodus to the greener (and almost all-white) pastures of suburban Oakland County. While a new Jewish Community Center goes up on Maple Road in West Bloomfield, safe from the immediate encroachment of blacks, the Northwest Activities Center is being fully re-tailored to suit the needs of its new constituency, and it's already beginning to emerge as the finest facility of its kind in the city to which black people have full and complete access.

The transformation of the 150,000-square foot Center into a city-owned recreation complex was made possible by the purchase of the building by the City of Detroit for some $3.5 million last summer, but it was a community group - the Committee for Community Utilization of the Jewish Community Center (CUJCC) - which brought about the City's involvement in the project. The CUJCC group was formed in 1971 to help neighborhood residents gain access to and make use of the Center for recreational and educational purposes, and when CUJCC President Herbert Williams heard that the building was up for sale in 1973, he led the organization into action to secure the necessary funds.

Originally rejected by former mayor Roman Gribbs, the CUJCC received a warm reception from the Coleman Young administration, which agreed with Williams' belief that the Center could be a particularly valuable resource for the people of the Northwest side and the city as a whole. After a great deal of preparation and study, the City authorized the purchase of the Jewish Community Center and allocated some $300,000 for renovation and initial operating costs, coming up in the process with a plan to make the Center work as a self-sustaining facility supported by the people who use it.

The idea is that the gymnasium and spa-type services, including the Olympic-sized swimming pool, can generate revenue through paid memberships in the Cosmopolitan Club, "a complete facility for healthful enjoyment," which in turn will enable the Center to offer open access, on a limited but generous basis, to community persons who can't afford memberships. With the basic operating costs of the facility covered by health club memberships, the Center can then afford to offer a wide range of classes, programs, theatre and concert presentations, and other services on a cost basis, and the community can maximize its use of the Center on many levels without having to seek non-existent funds from the city's aching treasury.

To effect this resourceful plan the City set up a non-profit corporation, Northwest Community Programs Inc., with a Board of Directors comprising six City department heads and three CUJCC representatives, including Herbert Williams. Northwest Community Programs leases the facility from the City of Detroit for $1 a year, and after the initial City grants ($200,000 for re-equipping the facility, $106,000 for seed money to begin operations) the non-profit group is expected to generate operating revenues from its own operations.

An ambitious cultural program was immediately put into effect, featuring concerts by the orchestras of Duke Ellington and Count Basie and theatre presentations by the Peddy Players (Great White Hope), La Vice Theatre Company, The Group Theatre (Lorraine Hansberry's The Sign in Sidney Brustein's Window), the Paul Robeson Players (The Idea of Ancestry), and the Writhm Dance Company. An open house for the entire Center was organized for March 14th, attracting more than 3000 people to tour the facility, and a wave of media publicity was launched to get the Center off the ground. By April 1st everything will be in full sail, and the city will have one more reason to be proud of its cultural and recreational riches.

Membership in the Cosmopolitan Club, which includes access to the Center's handball courts, game rooms, swimming pool, sun deck, two gymnasiums, squash and racketball courts, sauna, steam room, dance studio, theatre, 500-seat auditorium, restaurant, classrooms, and cabaret room, starts at $240.00 yearly for a single adult, $395.00 for an entire family. A "swim and gym" family membership is available for $100.00 ($45.00 for an individual), and there are a number of flexible combinations which can be arranged to suit particular needs. At present the Club is accepting only lump-sum payments (there is a quarterly payment plan which adds greatly to the total fare), but hopefully an installment plan will be offered as soon as a sizable amount of operating capital is raised from sales of charter memberships. Free community access is also in effect at certain hours of certain days; call the Center at 224-7590 for specific information.

The Northwest Activities Center is located at 18100 Meyers (corner of Curtis); the general telephone number is 224-7595; and the facilities are sitting there wafting for you to check them out. As Mayor Young said in his dedicatory address at the Open House March 14th, "This center is a challenge, a sign that we are not going down. The city must invest in the people where we can't get others to do it, and we will progress as long as we have faith in each other." There's been a lot of faith invested in the Northwest Activities Center already, and a lot of people in this community stand to reap the rewards for a long time to come.