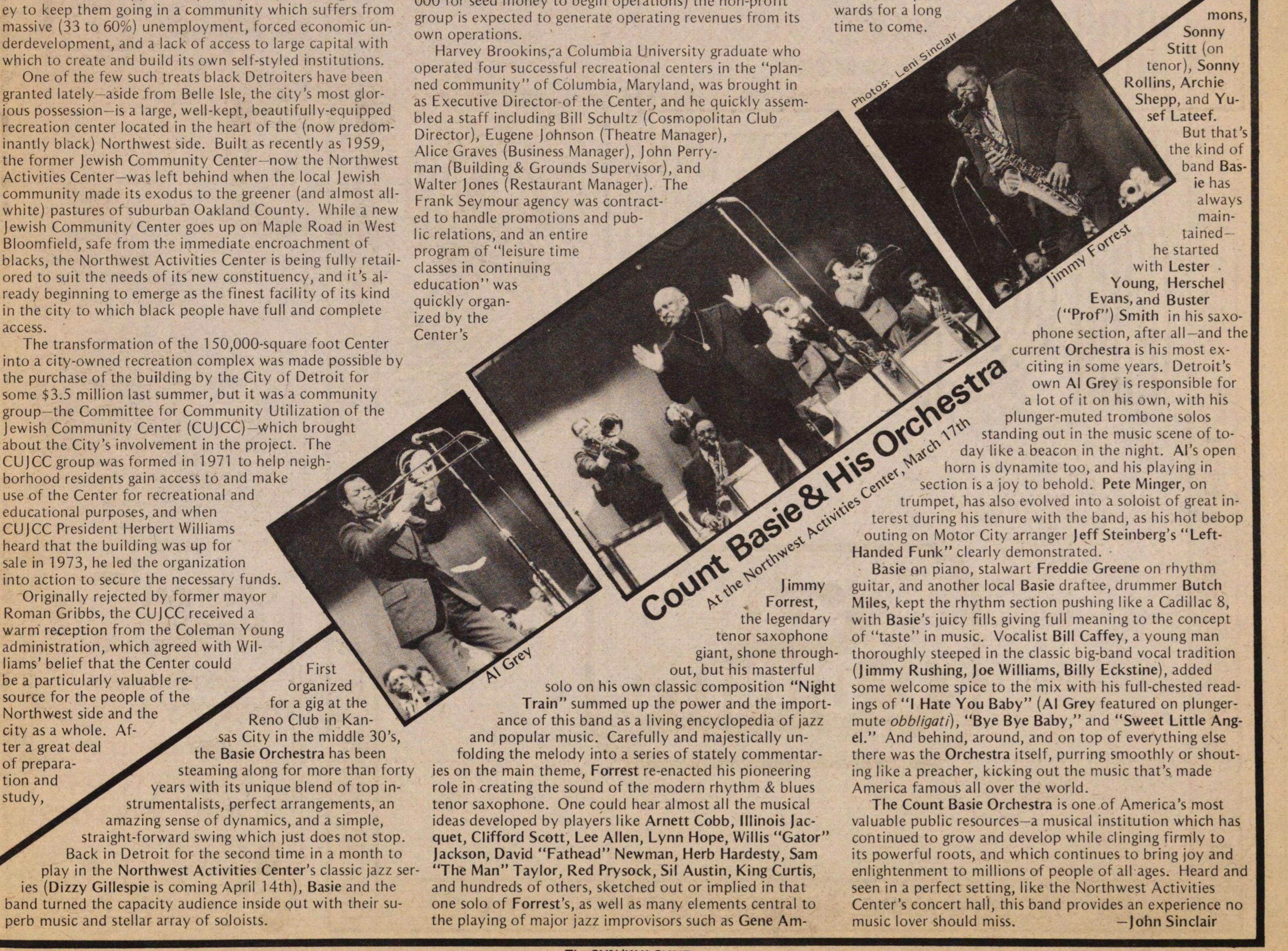 c5.; & r First organized W for a gig at the Reno Club n sas City n the middie 3O's, the Basie Orchestra has been r steaming along for more than forty years with its unique blend of top strumentalists, perfect arrangements, an amazing sense of dynamics, and a simple, straight-forward swing which just does not stop. r Back in Detroit for the second time in a month to play in the Northwest Activities Center's classic jazz series (Dizzy Gillespie is coming April 14th), Basie and the band turned the capacity audience inside out with their superb music and stellar array of soloists. tenor saxophone giant, shone throughout, but his masterful )r solo on his own classic composition "Night Train" summed up the power and the import anee of this band as a living encyclopedia of jazz i and popular music. Carefully and majestically un folding the melody into a series of stately commentar1 es on the main theme, Forrest re-enacted his pioneering role n creating the sound of the modern rhythm & blues tenor saxophone. One could hear almost all the musical deas developed by players like Arnett Cobb, Illinois Jacquet, Clifford Scott, Lee Allen, Lynn Hope, Willis "Gator" Jackson, David "Fathead" Newman, Herb Hardesty, Sam "The Man" Taylor, Red Prysock, Sil Austin, King Curtis, and hundreds of others, sketched out or implied in that one solo of Forrest's, as well as many elements central to the playing of major jazz mprovisors such as Gene f mons, r Sonny T Stitt (on tenor), Sonny . Rollins, Archie Shepp, and Yul sef Lateef. But that's the kind of band e has always tained- he started with Lester ■ Youna. Herschei Evans, and Buster ("Prof") Smith n his phone section, after all- and the current Orchestra is his most citing n some years. Detroit's own Al Grev s resDonsible for a lot of t on his own, with nis plunger-muted trombone solos V standing out in the music scène ot today like a beacon n the night. AI's open , hom s dynamite too, and his playing in c section s a joy to behold. Pete Minger, on trumpet, has also evolved nto a soloist of great inrest during his tenure with the band, as his hot bebop ;ing on Motor City arranger Jeff Steinberg's "Leftled Funk" clearly demonstrated. isie on piano, stalwart Freddie Greene on rhythm r, and another local Basie draftee, drummer Butch i, kept the rhythm section pushing like a Cadillac 8, Basie's juicy filis giving full meaning to the concept of "taste" n music. Vocalist Bill Caffey, a young man thoroughly steeped in the classic big-band vocal tradition (Jimmy Rushing, )oe Williams, Billy Eckstine), added some welcome spice to the mix with his full-chested readings of "I Hate You Baby" (Al Grey featured on plungermute obbligati), "Bye Bye Baby," and "Sweet Little Angel." And behmd, around, and on top of everything else there was the Orchestra tself, purring smoothly or shouting like a preacher, kicking out the music that's made America famous all over the world. The Count Basie Orchestra is one of America 's most valuable public resources- a musical institution which has continued to grow and develop while cl inging firmly to its powerful roots, and which continúes to bring oy and enlightenment to millions of people of all ages. Heard and seen in a perfect setting, like the Northwest Activities Center's concert hall, this band provides an experience no Tiusic lover should miss.