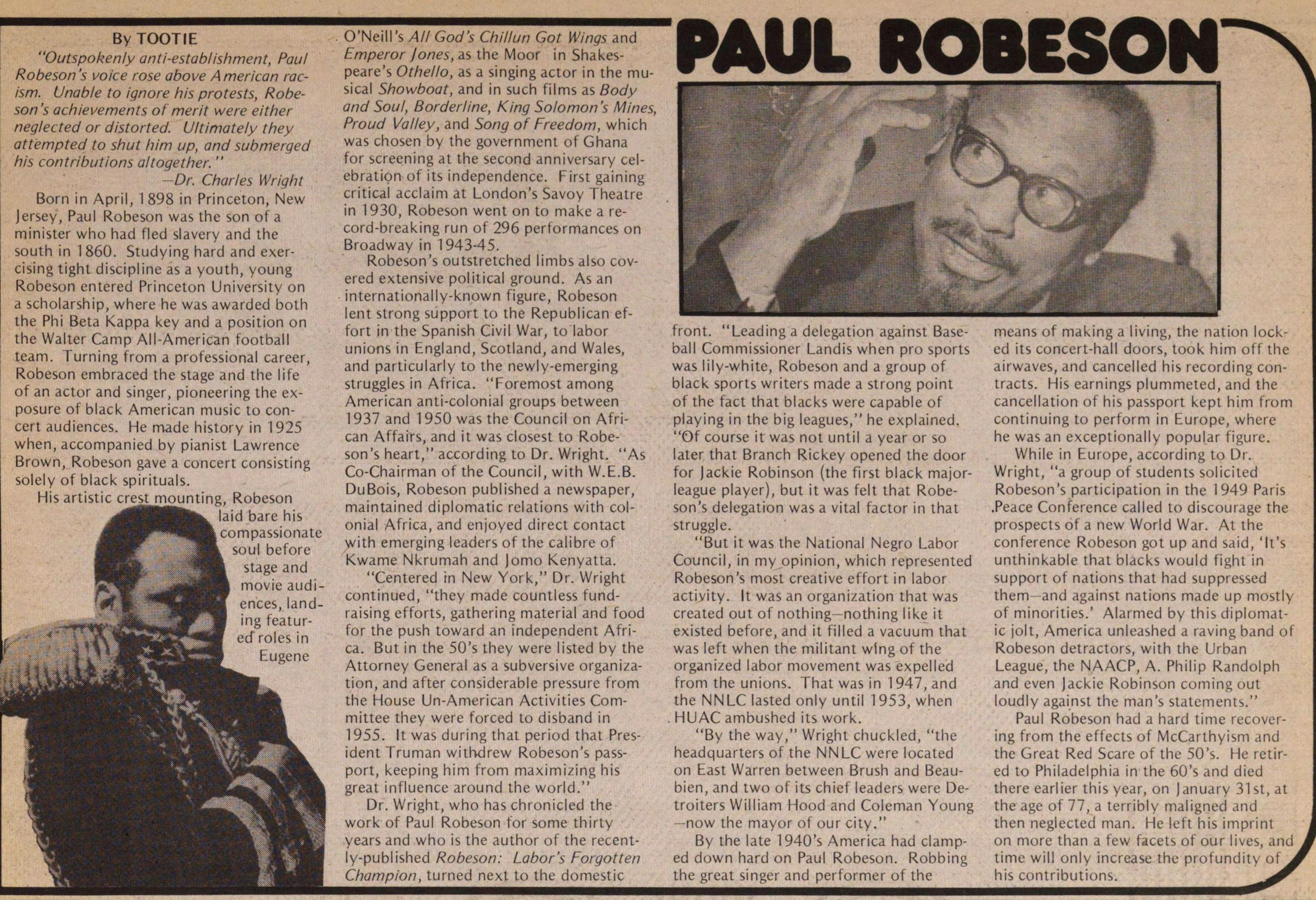 "Outspokenly anti-establishment, Paul Robeson's voice rose above American racism. Unable to ignore his protests, Robeson's achievements of merit were either neglected or distorted. Ultimately they attempted to shut him up, and submerged his contributions altogether." -Dr. Charles Wright

Born in April, 1898 in Princeton, New Jersey, Paul Robeson was the son of a minister who had fled slavery and the south in 1860. Studying hard and exercising tight discipline as a youth, young Robeson entered Princeton University on a scholarship, where he was awarded both the Phi Beta Kappa key and a position on the Walter Camp All-American football team. Turning from a professional career, Robeson embraced the stage and the life of an actor and singer, pioneering the exposure of black American music to concert audiences. He made history in 1925 when, accompanied by pianist Lawrence Brown, Robeson gave a concert consisting solely of black spirituals.

His artistic crest mounting, Robeson laid bare his compassionate soul before stage and movie audiences, landing featured roles in Eugene O'NeilI's All God's Chillun Got Wings and Emperor Jones, as the Moor in Shakespeare's Othello, as a singing actor in the musical Showboat, and in such films as Body and Soul, Borderline, King Solomon's Mines, Proud Valley, and Song of Freedom, which was chosen by the government of Ghana for screening at the second anniversary celebration of its independence. First gaining critical acclaim at London's Savoy Theatre in 1930, Robeson went on to make a record-breaking run of 296 performances on Broadway in 1943-45.

Robeson's outstretched limbs also covered extensive political ground. As an internationally-known figure, Robeson lent strong support to the Republican effort n the Spanish Civil War, to labor unions in England, Scotland, and Wales, and particularly to the newly-emerging struggles in Africa. "Foremost among American anti-colonial groups between 1937 and 1950 was the Council on African Affairs, and it was closest to Robeson's heart," according to Dr. Wright. "As Co-Chairman of the Council, with W.E.B. DuBois, Robeson published a newspaper, maintained diplomatic relations with colonial Africa, and enjoyed direct contact with emerging leaders of the calibre of Kwame Nkrumah and Jomo Kenyatta.

"Centered in New York," Dr. Wright continued, "they made countless fundraising efforts, gathering material and food for the push toward an independent Africa. But in the 50's they were listed by the Attorney General as a subversive organization, and after considerable pressure from the House Un-American Activities Committee they were forced to disband in 1955. It was during that period that President Truman withdrew Robeson's passport, keeping him from maximizing his great influence around the world."

Dr. Wright, who has chronicled the work of Paul Robeson for some thirty years and who is the author of the recently-published Robeson: Labor's Forgotten Champion, turned next to the domestic front. "Leading a delegation against Baseball Commissioner Landis when pro sports was lily-white, Robeson and a group of black sports writers made a strong point of the fact that blacks were capable of playing in the big leagues," he explained. "Of course it was not until a year or so later that Branch Rickey opened the door for Jackie Robinson (the first black major-league player), but it was felt that Robeson's delegation was a vital factor in that struggle.

"But it was the National Negro Labor Council, in my opinion, which represented Robeson's most creative effort in labor activity. It was an organization that was created out of nothing - nothing like it existed before, and it filled a vacuum that was left when the militant wing of the organized labor movement was expelled from the unions. That was in 1947, and the NNLC lasted only until 1953, when HUAC ambushed its work.

"By the way," Wright chuckled, "the headquarters of the NNLC were located on East Warren between Brush and Beaubien, and two of its chief leaders were Detroiters William Hood and Coleman Young - now the mayor of our city."

By the late 1940's America had clamped down hard on Paul Robeson. Robbing the great singer and performer of the means of making a living, the nation locked its concert-hall doors, took him off the airwaves, and cancelled his recording contracts. His earnings plummeted, and the cancellation of his passport kept him from continuing to perform in Europe, where he was an exceptionally popular figure.

While in Europe, according to Dr. Wright, "a group of students solicited Robeson's participation in the 1949 Paris Peace Conference called to discourage the prospects of a new World War. At the conference Robeson got up and said, 'It's unthinkable that blacks would fight in support of nations that had suppressed them- and against nations made up mostly of minorities.' Alarmed by this diplomatic jolt, America unleashed a raving band of Robeson detractors, with the Urban League, the NAACP, A. Philip Randolph and even Jackie Robinson coming out loudly against the man's statements."

Paul Robeson had a hard time recovering from the effects of McCarthyism and the Great Red Scare of the 50's. He retired to Philadelphia in the 60's and died there earlier this year, on January 31st, at the age of 77, a terribly maligned and then neglected man. He left his imprint on more than a few facets of our lives, and time will only increase the profundity of his contributions.