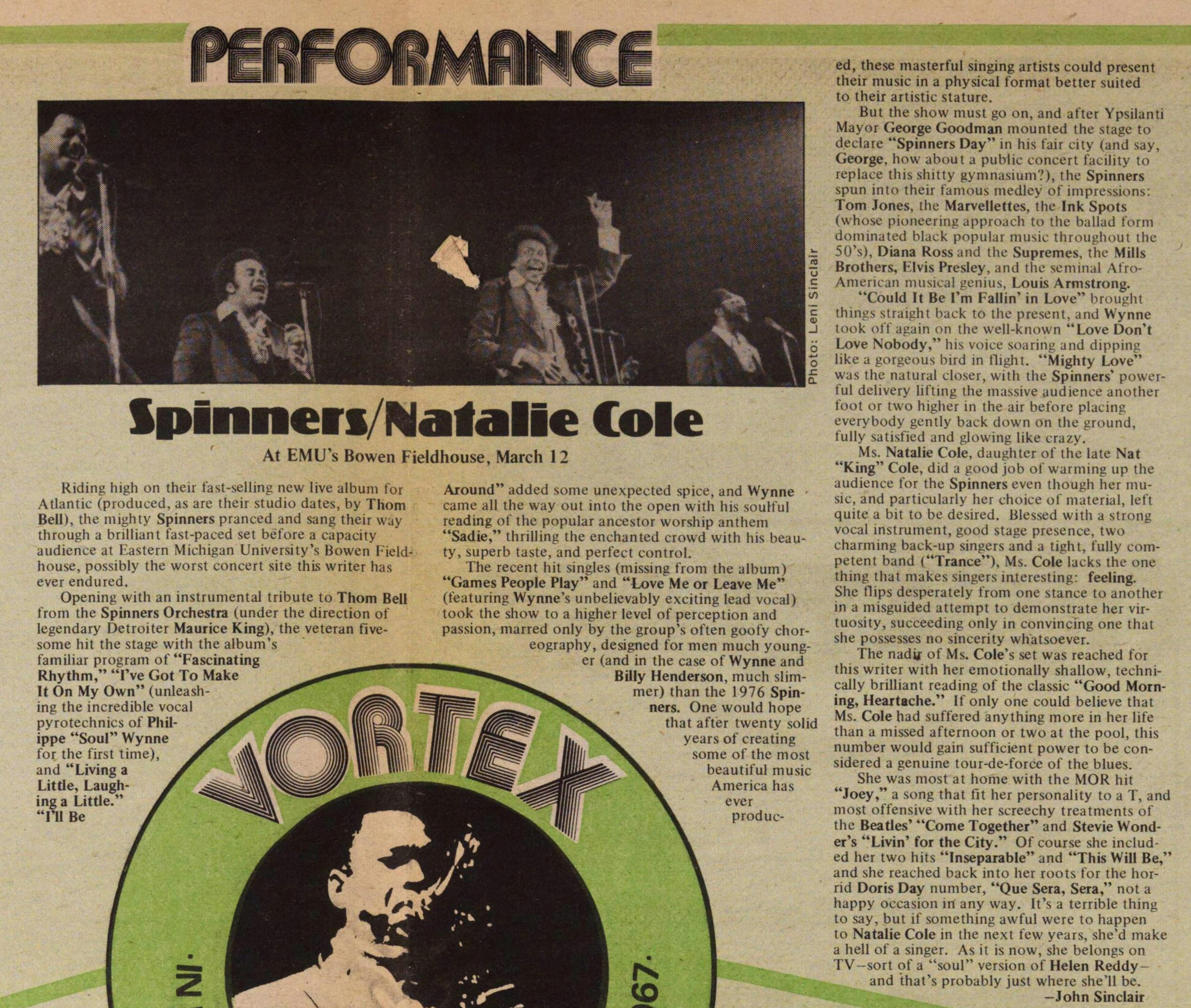 Riding high on their fast-selling new live album for Atlantic (produced, as are their studio dates, by Thom Bell), the mighty Spinners pranced and sang their way through a brilliant fast-paced set before a capacity audience at Eastern Michigan University's Bowen Fieldhouse, possibly the worst concert site this writer has ever endured.

Opening with an instrumental tribute to Thom Bell from the Spinners Orchestra (under the direction of legendary Detroiter Maurice King), the veteran five-some hit the stage with the album's familiar program of "Fascinating Rhythm," "I've Got To Make It On My Own" (unleashing the incredible vocal pyrotechnics of Philippe "Soul" Wynne for the first time), and "Living a Little,Laughing a Little." "I'll Be Around" added some unexpected spice, and Wynne came all the way out into the open with his soulful reading of the popular ancestor worship anthem "Sadie," thrilling the enchanted crowd with his beauty, superb taste, and perfect control.

The recent hit singles (missing from the album) "Games People Play" and "Love Me or Leave Me" (featuring Wynne's unbelievably exciting lead vocal) took the show to a higher level of perception and passion, marred only by the group's often goofy choreography, designed for men much younger (and in the case of Wynne and Billy Henderson, much slimmer) than the 1976 Spinners. One would hope that after twenty solid years of creating some of the most beautiful music America has ever produced, these masterful singing artists could present their music in a physical format better suited to their artistic stature.

But the show must go on, and after Ypsilanti Mayor George Goodman mounted the stage to declare "Spinners Day" in his fair city (and say, George, how about a public concert facility to replace this shitty gymnasium?), the Spinners spun into their famous medley of impressions: Tom Jones, the Marvellettes, the Ink Spots (whose pioneering approach to the ballad form dominated black popular music throughout the 50's), Diana Ross and the Supremes, the Mills Brothers, Elvis Presley, and the seminal Afro-American musical genius, Louis Armstrong.

"Could It Be I'm Fallin' in Love" brought things straight back to the present, and Wynne took off again on the well-known "Love Don't Love Nobody," his voice soaring and dipping like a gorgeous bird in flight. "Mighty Love" was the natural closer, with the Spinners' powerful delivery lifting the massive audience another foot or two higher in the air before placing everybody gently back down on the ground, fully satisfied and glowing like crazy.

Ms. Natalie Cole, daughter of the late Nat "King" Cole, did a good job of warming up the audience for the Spinners even though her music, and particularly her choice of material, left quite a bit to be desired. Blessed with a strong vocal instrument, good stage presence, two charming back-up singers and a tight, fully competent band ("Trance"), Ms. Cole lacks the one thing that makes singers interesting: feeling. She flips desperately from one stance to another in a misguided attempt to demonstrate her virtuosity, succeeding only in convincing one that she possesses no sincerity whatsoever.

The nadir of Ms. Cole's set was reached for this writer with her emotionally shallow, technically brilliant reading of the classic "Good Morning, Heartache." If only one could believe that Ms. Cole had suffered anything more in her life than a missed afternoon or two at the pool, this number would gain sufficient power to be considered a genuine tour-de-force of the blues.

She was most at home with the MOR hit "Joey," a song that fit her personality to a T, and most offensive with her screechy treatments of the Beatles' "Come Together" and Stevie Wonder's "Livin' for the City." Of course she included her two hits "Inseparable" and "This Will Be," and she reached back into her roots for the horrid Doris Day number, "Que Sera, Sera," not a happy occasion in any way. It's a terrible thing to say, but if something awful were to happen to Natalie Cole in the next few years, she'd make a hell of a singer. As it is now, she belongs on TV - sort of a "soul" version of Helen Reddy - and that's probably just where she'll be.