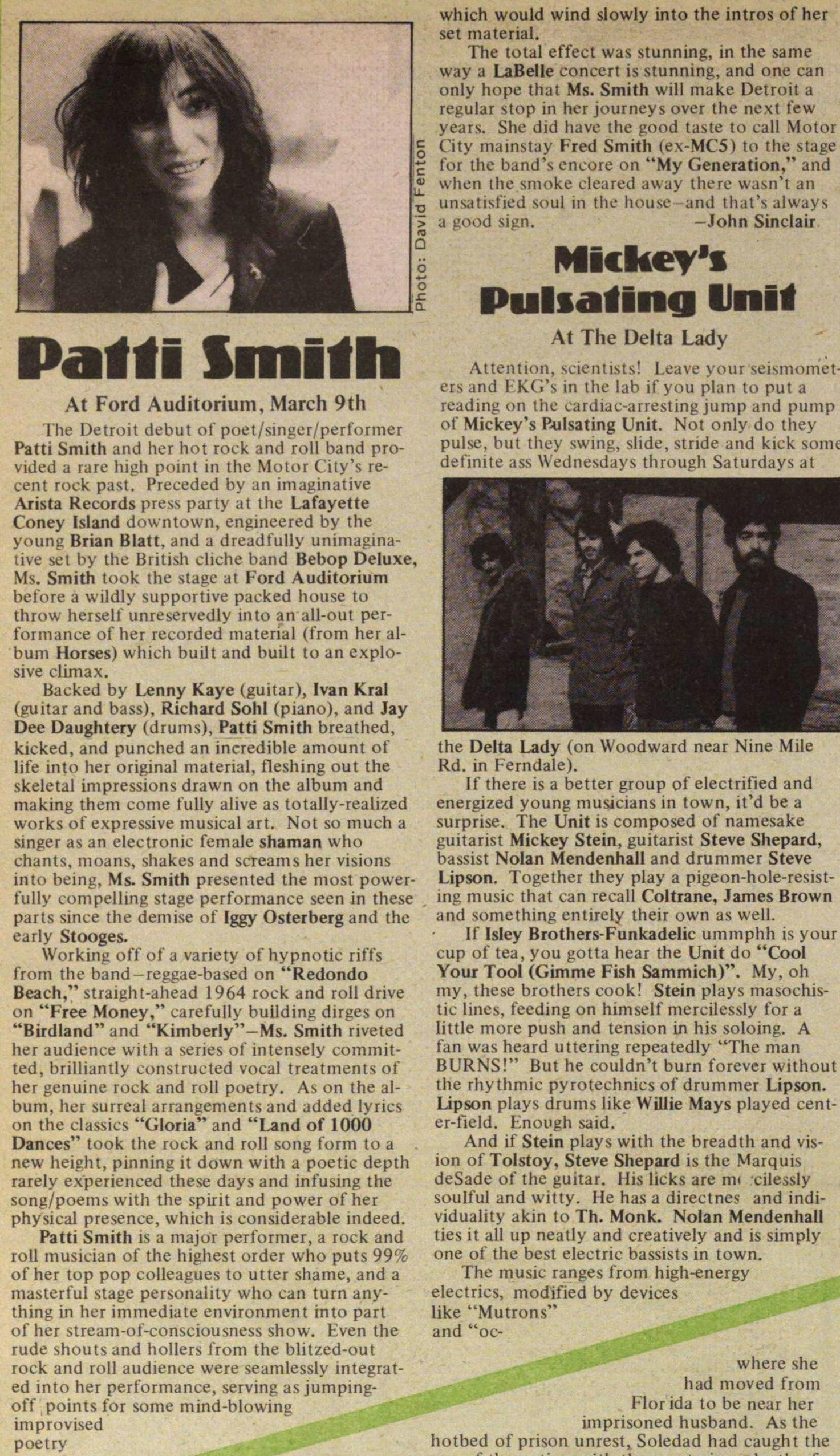 The Detroit debut of poet/singer/performer Patti Smith and her hot rock and roll band provided a rare high point in the Motor City's recent rock past. Preceded by an imaginative Arista Records press party at the Lafayette Coney Island downtown, engineered by the young Brian Blatt, and a dreadfully unimaginative set by the British cliché band Bebop Deluxe, Ms. Smith took the stage at Ford Auditorium before a wildly supportive packed house to throw herself unreservedly into an all-out performance of her recorded material (from her album Horses) which built and built to an explosive climax.

Backed by Lenny Kaye (guitar), Ivan Kral (guitar and bass), Richard Sohl (piano), and Jay Dee Daughtery (drums), Patti Smith breathed, kicked, and punched an incredible amount of life into her original material, fleshing out the skeletal impressions drawn on the album and making them come fully alive as totally-realized works of expressive musical art. Not so much a singer as an electronic female shaman who chants, moans, shakes and screams her visions into being, Ms. Smith presented the most powerfully compelling stage performance seen in these parts since the demise of Iggy Osterberg and the early Stooges.

Working off of a variety of hypnotic riffs from the band - reggae-based on "Redondo Beach," straight-ahead 1964 rock and roll drive on "Free Money," carefully building dirges on "Birdland" and "Kimberly"- Ms. Smith riveted her audience with a series of intensely committed, brilliantly constructed vocal treatments of her genuine rock and roll poetry. As on the album, her surreal arrangements and added lyrics on the classics "Gloria" and "Land of 1000 Dances" took the rock and roll song form to a new height, pinning it down with a poetic depth rarely experienced these days and infusing the song/poems with the spirit and power of her physical presence, which is considerable indeed.

Patti Smith is a major performer, a rock and roll musician of the highest order who puts 99% of her top pop colleagues to utter shame, and a masterful stage personality who can turn anything in her immediate environment into part of her stream-of-consciousness show. Even the rude shouts and hollers from the blitzed-out rock and roll audience were seamlessly integrated into her performance, serving as jumping-off points for some mind-blowing improvised poetry which would wind slowly into the intros of her set material.

The total effect was stunning, in the same way a LaBelle concert is stunning, and one can only hope that Ms. Smith will make Detroit a regular stop in her journeys over the next few years. She did have the good taste to call Motor City mainstay Fred Smith (ex-MC5) to the stage for the band's encore on "My Generation," and when the smoke cleared away there wasn't an unsatisfied soul in the house and that's always a good sign.