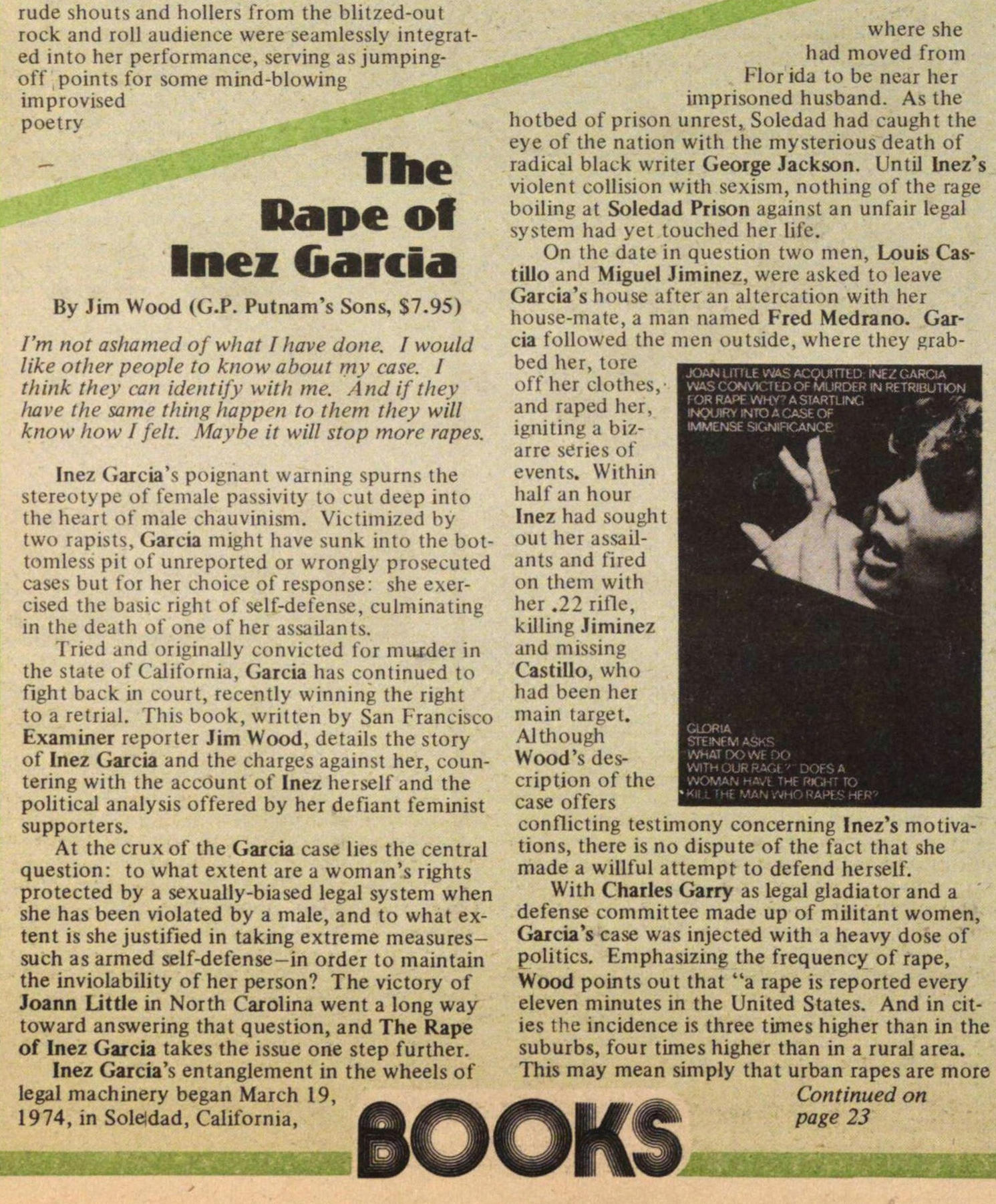 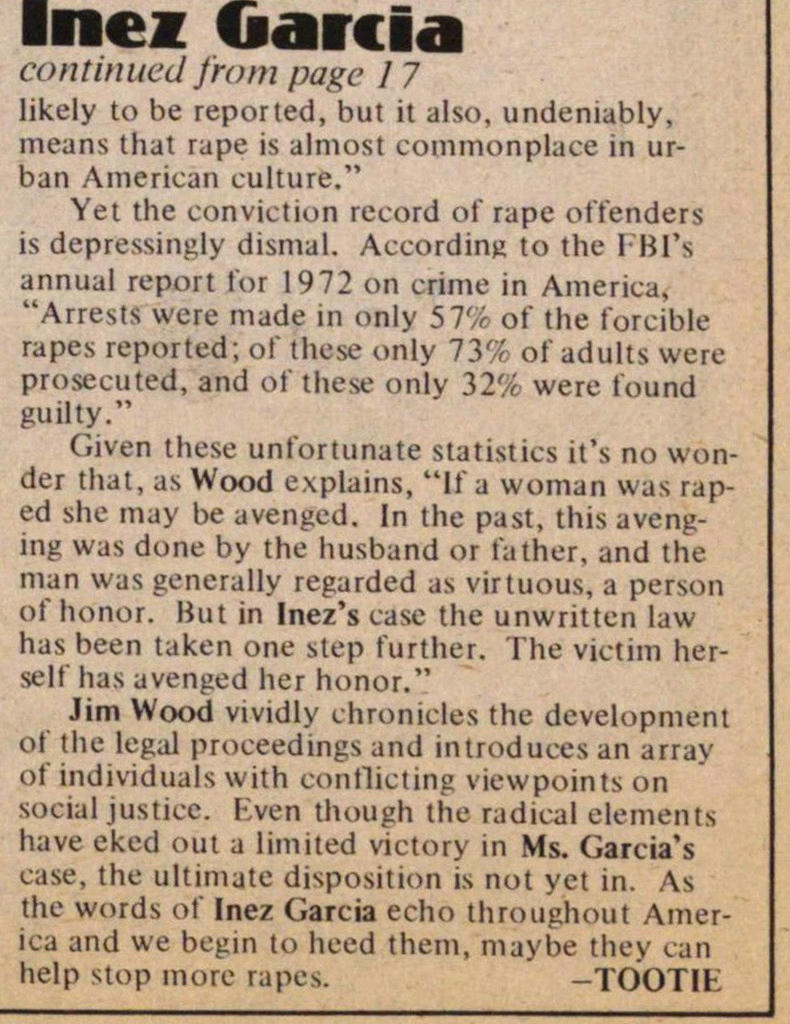 By Jim Wood (G.P. Putnam's Sons, $7.95) 'm not ashamed of what I have done. I would like other people to know about my case. I think they can identify witli me. And if they have the same thing happen to them they will know how I feit. Maybe it will stop more rapes. Inez Garcia's poignant warning spurns the stereotype of témale passivity to cut deep into the heart of male chauvinism. Victimized by two rapists. Garda might have sunk into the bottomless pit of unreported or wrongly prosecuted cases but tor her choice of response: she exercised the basic right of self-defense, culminating in the death of one of her assailants. Tried and originally convicted for muxder in the state of California, García has continued to fight back in court, recently winning the right to a retrial. This book, written by San Francisco Examiner reporter Jim Wood, details the story of Inez García and the charges against her, countering with the account of Inez herself and the political analysis offered by her defiant feminist supporters. At the crux of the García case lies the central question: to what extent are a woman's rights protected by a sexually-biased legal systeni when she has been violated by a male, and to what extent is she justified in taking extreme measuressuch as armed self-defense-in order to maintain the inviolability of her person? The victory of Joann Little in North Carolina went a long way toward answering that question, and The Rape of Inez García takes the issue one step further. Inez Garcia's entanglement in the wheels of legal machinery began March 19, 1974, ín Soledad, California, where she had moved f rom Klorida to be near her imprisoned husband. As the hotbed of prison unrest, Soledad had caught the eye of the nation with the mysterious death of radical black writer George Jackson. Until lnez's violent collision with sexism, nothing of the rage boiling at Soledad Prison against an unfair legal system had yet touched her life. On the date in question two men, Louis Castillo and Miguel Jiminez, were asked to leave Garcia's house alter an aïtercation with her house-mate, a man named Fred Medrano. Garcia followed the men outside, where they bed her, tore off lier clothes, and raped her, igniting a bizarre series ot events. Within half an hour Inez had sought out her assailants and fired on them with her .22 rille, killing Jiminez and missing Castillo, who had been her niain target. Although Wood's description of the case offers conflicting testimony concerning Inez's motivations, there is no dispute of the fact that she made a willful attempt to defend herself. With Charles Garry as legal gladiator and a defense committee made up of militant woinen, Gaxcia's case was injected with a heavy dose of politics. Emphasizing the frequency of rape, Wood points out that "a rape is reported every eleven minutes in the United States. And in cities the incidence is three times higher than in the suburbs, four times higher than in a rural área. This may mean simply that urban rapes are more iominuea on page 23 Inez barcia continued from page 1 7 likely to be reponed, but it also, undeniably, means that rape is almost commonplace in urban American culture." Yet the conviction record of rape otïenders is depressingly dismal. Accordirm to the I H IN annual report tor 1972 on crime in America, "Arresls wore made in only 5796 of the forcible rapes reported; ol' these only 73'V' of adults woro prosecuted, and ot' these only 32% were found guilty." Given these unfortunate statistics it's no wonder that, as Wood explains, "If a woman was raped she may be avenged. In the past, this avenging was done by the husband or t'ather, and the man was generally regarded as virtuous, a person ol' honor, lint in Inez's case the unwrittcn law has been taken one step further. The victim hersell has avenged her honor." Jim Wood vividly chronicles the development Of the legal proceedings and introduces an array of individuáis with conflicting viewpoints on social justice. Even tliough the radical elementi have eked out a limited victory in Ms. Garcia's case, the ultímate disposition is not yet in. As the words ot' Inez García echo throughout America and we begin to heed them, maybe they can help -.top more rapes.