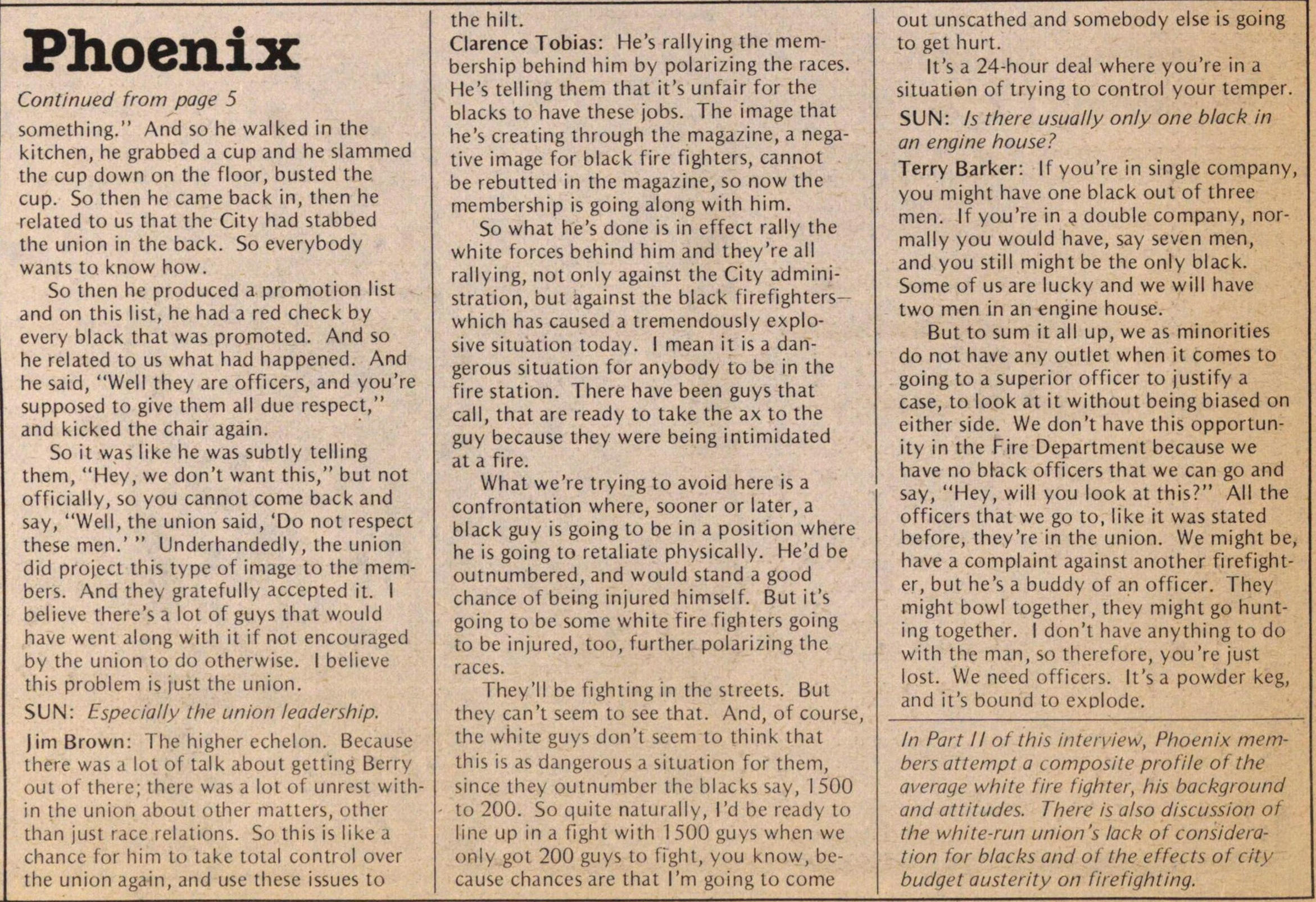 Phoenix Continued f rom page 5 something." And so he walked in the kitchen, he grabbed a cup and he slammed the cup down on the floor, busted the cup. So then he carne back in, then he related to us that the City had stabbed the union in the back. So everybody wants to know how. So then he produced a promotion list and on this list, he had a red check by every black that was promoted. And so he related to us what had happened. And he said, "Well they are officers, and you're supposed to give them all due respect," and kicked the chair again. So it was like he was subtly telling them, "Hey, we don't want this," but not officially, so you cannot come back and say, "Well, the union said, 'Do not respect these men.' " Underhandedly, the union did project this type of image to the members. And they gratefully accepted t. I believe there's a lot of guys that would have went along with t if not encouraged by the union to do otherwise. I believe this problem is just the union. SUN: Especially the union leadership. JimBrown: The higher echelon. Because there was a lot of talk about getting Berry out of there; there was a lot of unrest withn the union about other matters, other than just race relations. So this is like a chance for him to take total control over the union again, and use these issues to the hilt. Clarence Tobías: He's rallying the membership behind him by polarizing the races. He's telling them that t's unfair for the blacks to have these jobs. The image that he's creating through the magazine, a negative image for black fire fighters, cannot be rebutted n the magazine, so now the membership is going along with him. So what he's done is in effect rally the white forces behind him and they're all rallying, not only against the City administraron, but against the black firefighters- which has caused a tremendously explosive situation today. I mean it is a dangerous situation for anybody to be in the fire station. There have been guys that cali, that are ready to take the ax to the guy because they were being intimidated at a fire. VVhat we're trying to avoid herc is a confrontaron where, sooner or later, a black guy is going to be in a position where he is going to retalíate physically. He'd be outnumbered, and would stand a good chance of being injured himself. But it's going to be somc white fire fighters going to be injured, too, further polarizing the races. They'll be fighting in the streets. But they can 't seem to see that. And, of course, the white guys don't seem to think that this is as dangerous a situation for them, since they outnumbcr the blacks say, 1500 to 200. So quite naturally, l'd be ready to line up in a fight with 1 500 guys whcn we only got 200 guys to fight, you know, because chances are that l'm going to come out unscathed and somebody else s going to get hurt. It's a 24-hour deal where you're in a situation of trying to control your temper. SUN: Is there usually only one black in an engine house? Terry Barker: If you're n single company, you might have one black out of three men. If you're n a doublé company, normally you would have, say seven men, and you still might be the only black. Some of us are lucky and we will have two men in an engine house. But to sum it all up, we as minorities do not have any outlet when t comes to going to a superior officer to justify a case, to look at it without being biased on either side. We don 't have this opportunity in the Fire Department because we have no bfack officers that we can go and say, "Hey, will you look at this?" All the officers that we go to, like t was stated before, they're in the union. We might be, have a complaint against another firefighter, but he's a buddy of an officer. They might bowl together, they might go hunting together. I don't have anything to do with the man, so therefore, you're ust lost. We need officers. It's a powder keg, and t's bound to exolode. In Part II of this interview, Phoenix members at tempt a composi te protile of the average white fire fighter, his background and attitudes. There is also discussion ot the whi te-run union 's lack of consideration for blacks and of the effect 's of city budget austerity on firefighting.