Rhodesia continued fronx page 6 There is... 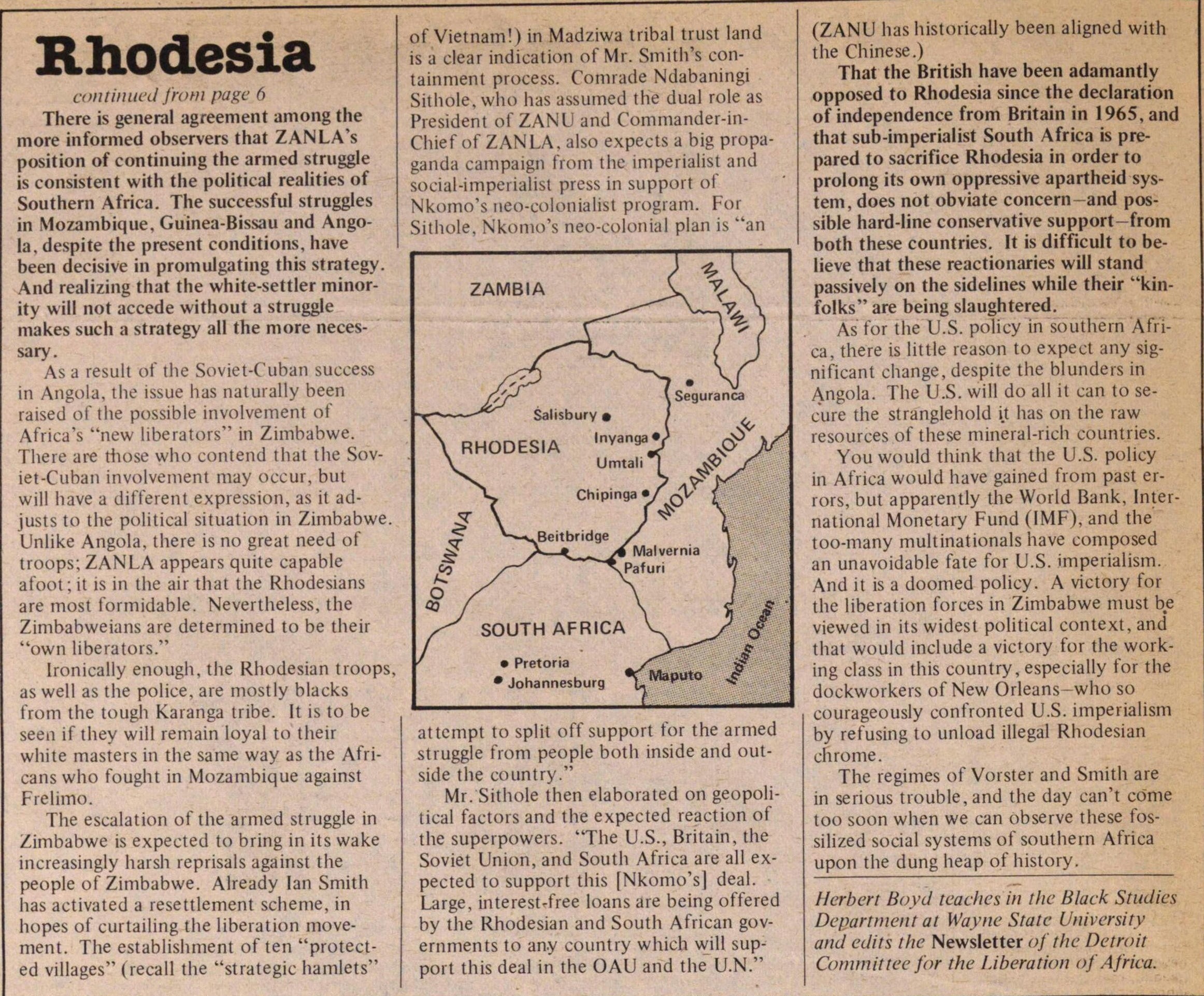 Rhodesia continued fronx page 6 There is general agreement among the more informed observers that ZANLA's position of continuing the armed struggle is consistent with the political realities of Southern África. The successful struggles in Mozambique, Guinea-Bissau and Angola, despite the present conditions, have been decisive in promulgating this strategy. And realizing that the white-settler minority will not accede without a struggle makes such a strategy all the more necessary. As a resull of the Soviet-Cuban success in Angola, the issue has nalurally been raised of the possible involvement of Africa's "new liberators" in Zimbabwe. There are tiiose who contend tliat the Soviet-Cuban involvement may occur, but will have a different expression, as it adjusts to the political situation in Zimbabwe. Unlike Angola, there is no great need of troops; ZANLA appears quite capable afoot;it is in the air that the Rhodesians are most formidable. Nevertheless, the Zimbabweians are determined to be their "own liberators." Ironically enough. the Rhodesian troops. as well as the pólice, are mostly blacks frotn the tough Karanga tribe. It is to be seen if they will remain loyal to their white masters in the same way as the Africans who fouglit in Mozambique against Frelimo. The escalation of the armed struggle in Zimbabwe is expected to bring in its wake increasingly harsh reprisals against the people of Zimbabwe. Already lan Smith has activated a resettlement scheme, in hopes of curtailing the liberation movement. The establishment of ten "protected villages" (recall the "strategie hamlets" of Vietnam!) in Madziwa tribal trust land is a clear indication of Mr. Smith's containment process. Comrade Ndabaningi Sithole. who has assumed the dual rule as President of ZANU and Commander-inChief of ZANLA. also expects a big propaganda campaign ffom tiie imperialist and sodal-imperialist prcss in support of Nkomo's neo-colonialist program. For Sithole. Nkomo's neo-colonial plan is "an attcmpt to split off support for the armed struggle from people botli inside and outside the country." Mr. Sithole then elaborated on geopolitical factors and the expected reaction of the superpowers. "The U.S., Britain, the Soviet Union, and South África are all expected to support this [Nkomo's] deal. Large, interest-free loans are being offered by the Rhodesian and South African govemments to any country which will support this deal in the OAU and the U.N." (ZANU has historically been aligned with the Chinese.) That the British have been adamantly opposed to Rhodesia since the declaration of independence from Britain in 1965, and that sub-imperialist South África is prepared to sacrifice Rhodesia in order to prolong its own oppressive apartheid system, does not obvíate concern- and possible hard-line conservative support-from both these countries. It is difficult to believe that these reactionaries will stand passively on the sidelines while their "kinfolks" are being slaughtered. As Fot the U.S. policy in soüihern Africa. there is little reason to expect any significant change, despite the blunders in Angola. The U.S. will do all it can to secure the stranglehold i; has on the raw resources of these mineral-rich countries. Youwould think that the U.S. policy in África would have gained from past errors, but apparently the World Bank, International Monetary Fund (IMF), and the too-many multinationals have composed an unavoidable fate for U.S. mperialism. And it is a doomed policy. A victory for the liberation forces in Zimbabwe must be viewed in its widest political context, and that would include a victory for the working class in this country, especially for the dockworkers of New Orleans-who so courageously confronted U.S. imperialism by refusing to unload Ilegal Rhodesian enrome. The regimes of Vorster and Smith are in serious trouble.and the day can't cöme too soon when we can observe these fossilized social systems of southern África upon the dung heap of history. Herben Boyd teaclics in the Black Studies Department at Wayne State University and edits the Newsletter of the Detroit Committec for the Liberation of África.