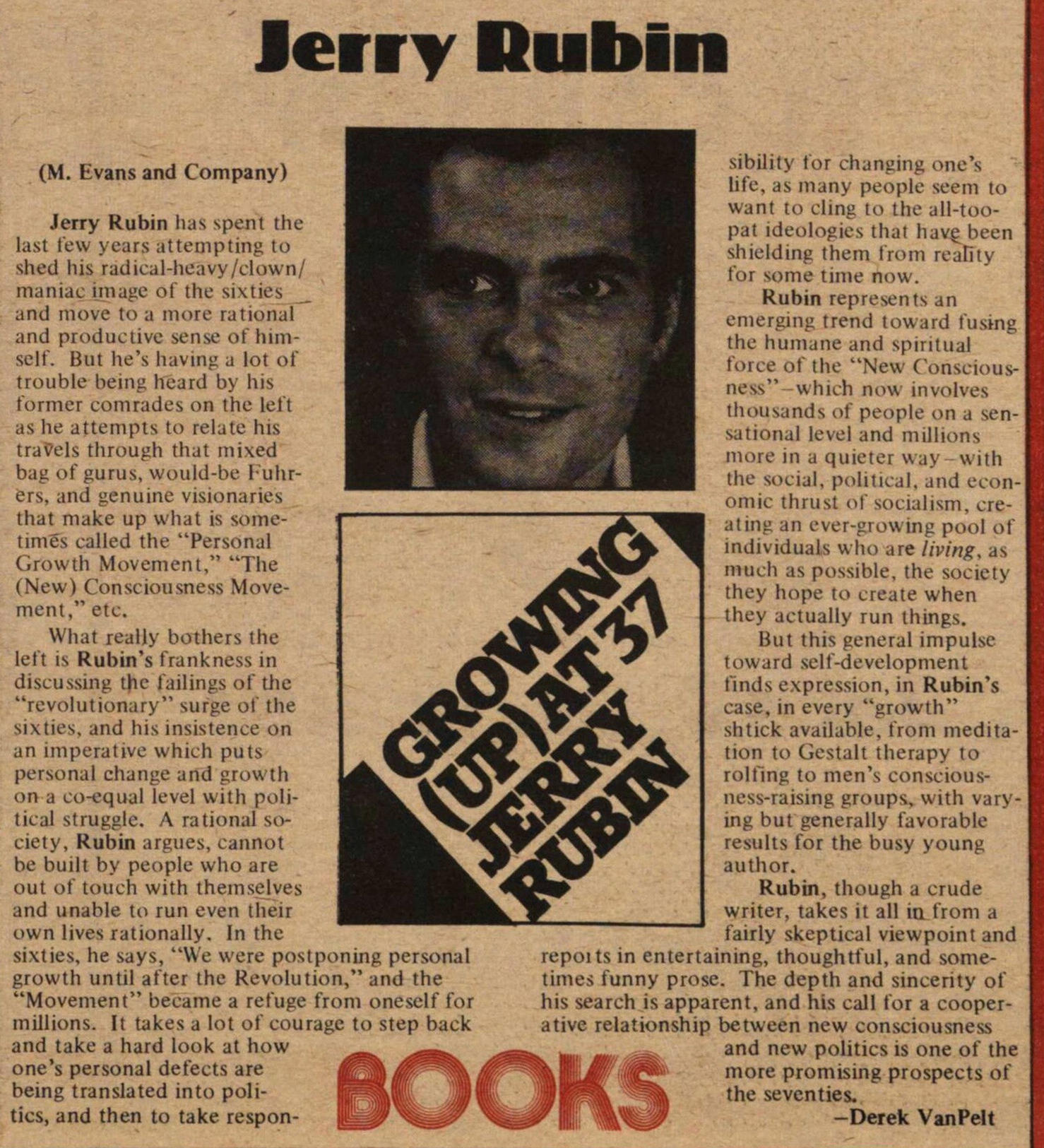 Jerry Rubin has spent the last few years attempting to shed his radical-heavy/clown/maniac image of the sixties and move to a more rational and productive sense of himself. But he's having a lot of trouble being heard by his former comrades on the left as he attempts to relate his travels through that mixed bag of gurus, would-be Fuhrers, and genuine visionaries that make up what is sometimes called the "Personal Growth Movement," "The (New) Consciousness Movement," etc.

What really bothers the left is Rubin's frankness in discussing the failings of the "revolutionary" surge of the sixties, and his insistence on an imperative which puts personal change and growth on a co-equal level with political struggle. A rational society, Rubin argues, cannot be built by people who are out of touch with themselves and unable to run even their own lives rationally. In the sixties, he says, "We were postponing personal growth until after the Revolution," and the "Movement" became a refuge from oneself for millions. It takes a lot of courage to step back and take a hard look at how one's personal defects are being translated into politics, and then to take responsibility for changing one's life, as many people seem to want to cling to the all-too-pat ideologies that have been shielding them from reality for some time now.

Rubin represents an emerging trend toward fusing the humane and spiritual force of the "New Consciousness" – which now involves thousands of people on a sensational level and millions more in a quieter way – with the social, political, and economic thrust of socialism, creating an ever-growing pool of individuals who are living, as much as possible, the society they hope to create when they actually run things.

But this general impulse toward self-development finds expression, in Rubin's case, in every "growth" shtick available. From meditation to Gestalt therapy to rolling to men's consciousness-raising groups, with varying but generally favorable results for the busy young author.

Rubin, though a crude writer, takes it all in from a fairly skeptical viewpoint and reports in entertaining, thoughtful, and sometimes funny prose. The depth and sincerity of his search is apparent, and his call for a cooperative relationship between new consciousness and new politics is one of the more promising prospects of the seventies.