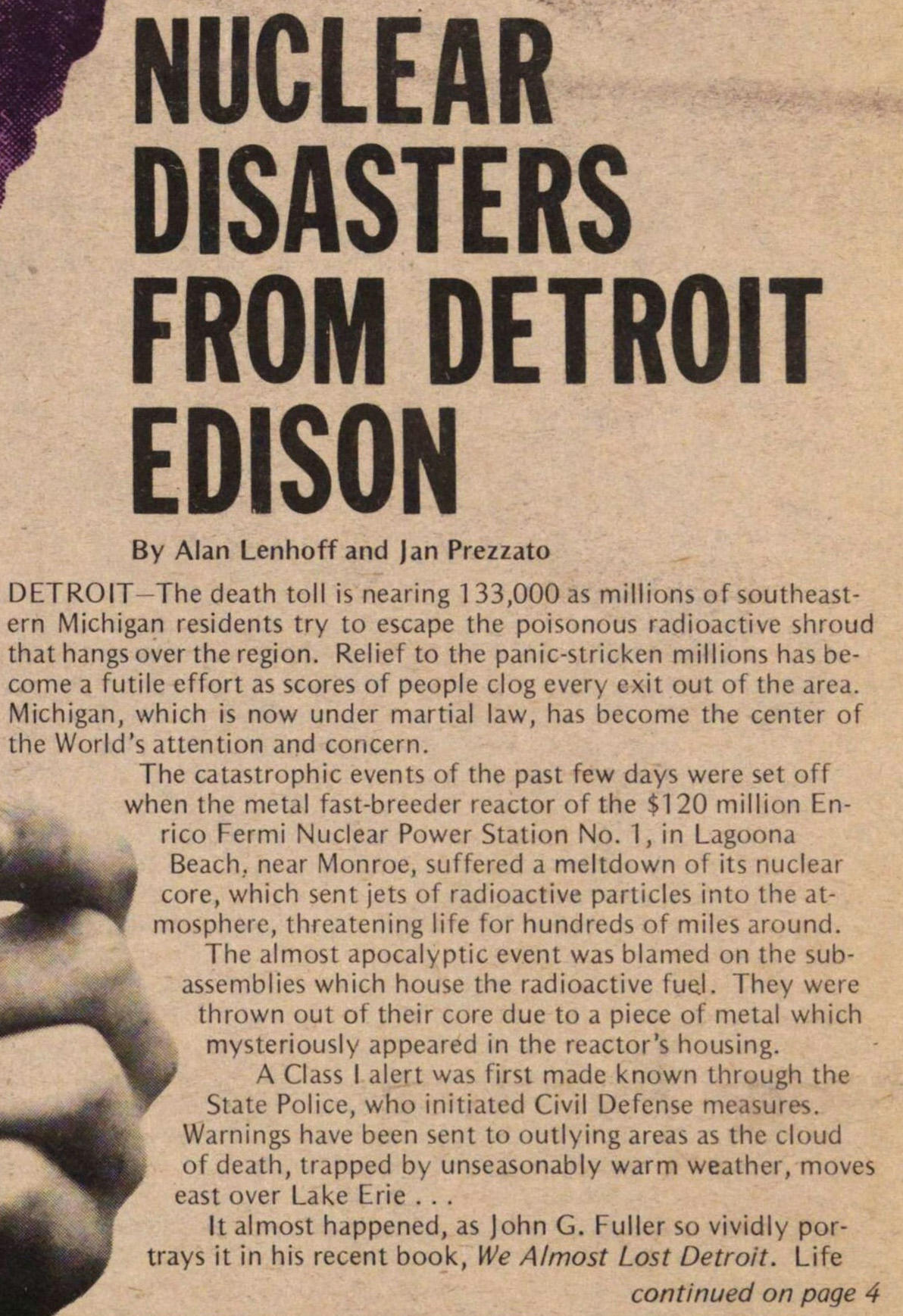 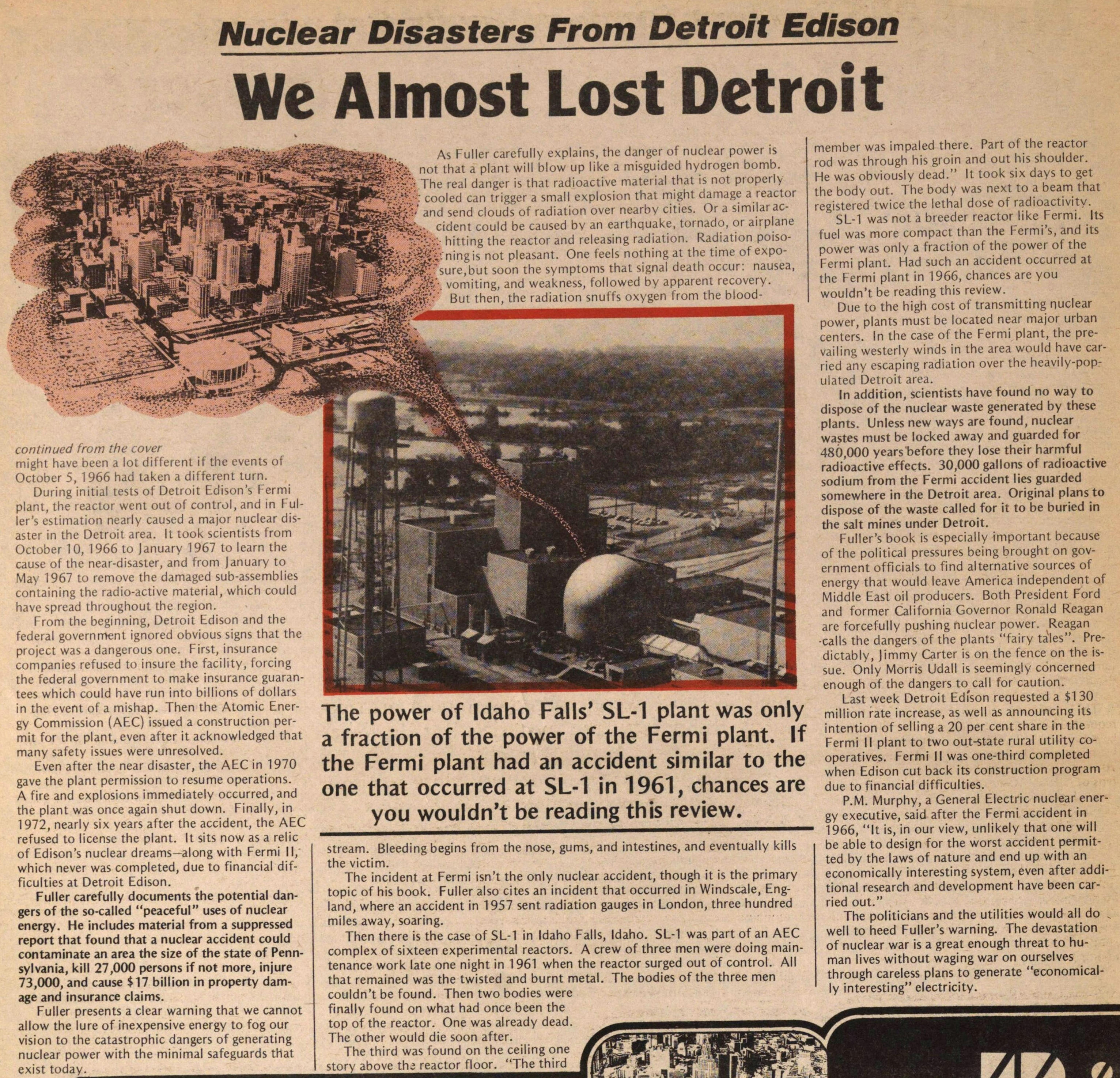 By Alan Lenhoff and Jan Prezzato

DETROIT-The death toll is nearing 133,000 as millions of southeastern Michigan residents try to escape the poisonous radioactive shroud that hangs over the region. Relief to the panic-stricken millions has become a futile effort as scores of people clog every exit out of the area. Michigan, which is now under martial law, has become the center of the World's attention and concern.

The catastrophic events of the past few days were set off when the metal fast-breeder reactor of the $120 million Enrico Fermi Nuclear Power Station No. 1, in Lagoona Beach. near Monroe, suffered a meltdown of its nuclear' core, which sent jets of radioactive particles into the atmosphere, threatening life for hundreds of miles around.

The almost apocalyptic event was blamed on the subassemblies which house the radioactive fuel. They were thrown out of their core due to a piece of metal which mysteriously appeared n the reactor's housing.

A Class I alert was first made known through the State Police, who initiated Civil Defense measures. Warnings have been sent to outlying areas as the cloud of death, trapped by unseasonably warm weather, moves east over Lake Erie . . .

It almost happened, as John G. Fuller so vividly portrays in his recent book, We Almost Lost Detroit. Life

might have been a lot different i the events of October 5, 1966 had taken a different turn.

During initial tests of Detroit Edison's Fermi plant, the reactor went out of control, and in Fuller's estimation nearly caused a major nuclear disaster in the Detroit area. It took scientists from October 10, 1966 to January 1967 to learn the cause of the near-disaster, and from January to May 1967 to remove the damaged sub-assemblies containing the radio-active material, which could have spread throughout the region.

From the beginning, Detroit Edison and the federal government ignored obvious signs that the project was a dangerous one. First, insurance companies refused to insure the facility, forcing the federal government to make insurance guarantees which could have run into billions of dollars in the event of a mishap. Then the Atomic Energy Commission (AEC) issued a construction permit for the plant, even after it acknowledged that many safety issues were unresolved.

Even after the near disaster, the AEC in 1970 gave the plant permission to resume operations. A fire and explosions immediately occurred, and the plant was once again shut down. Finally, in 1972, nearly six years after the accident, the AEC refused to license the plant. It sits now as a relic of Edison's nuclear dreams-along with Fermi II, which never was completed, due to financial difficulties at Detroit Edison.

Fuller carefully documents the potential dangers of the so-called "peaceful" uses of nuclear energy. He includes material from a suppressed report that found that a nuclear accident could contaminate an area the size of the state of Pennsylvania, kill 27,000 persons if not more, injure 73,000, and cause $17 billion in property damage and insurance claims.

Fuller presents a clear warning that we cannot allow the lure of inexpensive energy to fog our vision to the catastrophic dangers of generating nuclear power with the minimal safeguards that exist today.

As Fuller carefully explains, the danger of nuclear power is not that a plant will blow up like a misguided hydrogen bomb. The real danger is that radioactive material that is not properly cooled can trigger a small explosion that might damage a reactor and send clouds of radiation over nearby cities. Or a similar accident could be caused by an earthquake, tornado, or airplane hitting the reactor and releasing radiation. Radiation poisoning is not pleasant. One feels nothing at the time of exposure, but soon the symptoms that signal death occur: nausea, vomiting, and weakness, followed by apparent recovery. But then, the radiation snuffs oxygen from the bloodstream. Bleeding begins from the nose, gums, and intestines, and eventually kills the victim.

The incident at Fermi isn't the only nuclear accident, though it is the primary topic of his book. Fuller also cites an incident that occurred in Windscale, England, where an accident in 1957 sent radiation gauges in London, three hundred miles away, soaring.

Then there is the case of SL-1 in Idaho Falls, Idaho. SL-1 was part of an AEC complex of sixteen experimental reactors. A crew of three men were doing maintenance work late one night in 1961 when the reactor surged out of control. All that remained was the twisted and burnt metal. The bodies of the three men couldn't be found. Then two bodies were finally found on what had once been the top of the reactor. One was already dead. The other would die soon after.

The third was found on the ceiling one story above the reactor floor. "The third member was impaled there. Part of the reactor rod was through his groin and out his shoulder. He was obviously dead." It took six days to get the body out. The body was next to a beam that registered twice the lethal dose of radioactivity.

SL-1 was not a breeder reactor like Fermi. Its fuel was more compact than the Fermi's, and its power was only a fraction of the power of the Fermi plant. Had such an accident occurred at the Fermi plant in 1966, chances are you wouldn't be reading this review.

Due to the high cost of transmitting nuclear power, plants must be located near major urban centers. In the case of the Fermi plant, the prevailing westerly winds in the area would have carried any escaping radiation over the heavily-populated Detroit area.

In addition, scientists have found no way to dispose of the nuclear waste generated by these plants. Unless new ways are found, nuclear wastes must be locked away and guarded for 480,000 years before they lose their harmful radioactive effects. 30,000 gallons of radioactive sodium from the Fermi accident lies guarded somewhere in the Detroit area. Original plans to dispose of the waste called for it to be buried in the salt mines under Detroit.

Fuller's book is especially important because of the political pressures being brought on government officials to find alternative sources of energy that would leave America independent of Middle East oil producers. Both President Ford and former California Governor Ronald Reagan are forcefully pushing nuclear power. Reagan calls the dangers of the plants "fairy tales". Predictably, Jimmy Carter is on the fence on the issue. Only Morris Udall is seemingly concerned enough of the dangers to call for caution.

Last week Detroit Edison requested a $130 million rate increase, as well as announcing its intention of selling a 20 per cent share in the Fermi II plant to two out-state rural utility cooperatives. Fermi II was one-third completed when Edison cut back its construction program due to financial difficulties.

P.M. Murphy, a General Electric nuclear energy executive, said after the Fermi accident in 1966, "It is, in our view, unlikely that one will be able to design for the worst accident permitted by the laws of nature and end up with an economically interesting system, even after additional research and development have been carried out."

The politicians and the Utilities would all do well to heed Fuller's warning. The devastation of nuclear war is a great enough threat to human lives without waging war on ourselves through careless plans to generate "economically interesting" electricity.