Down To The Nitty Gritty - Motor City Blues 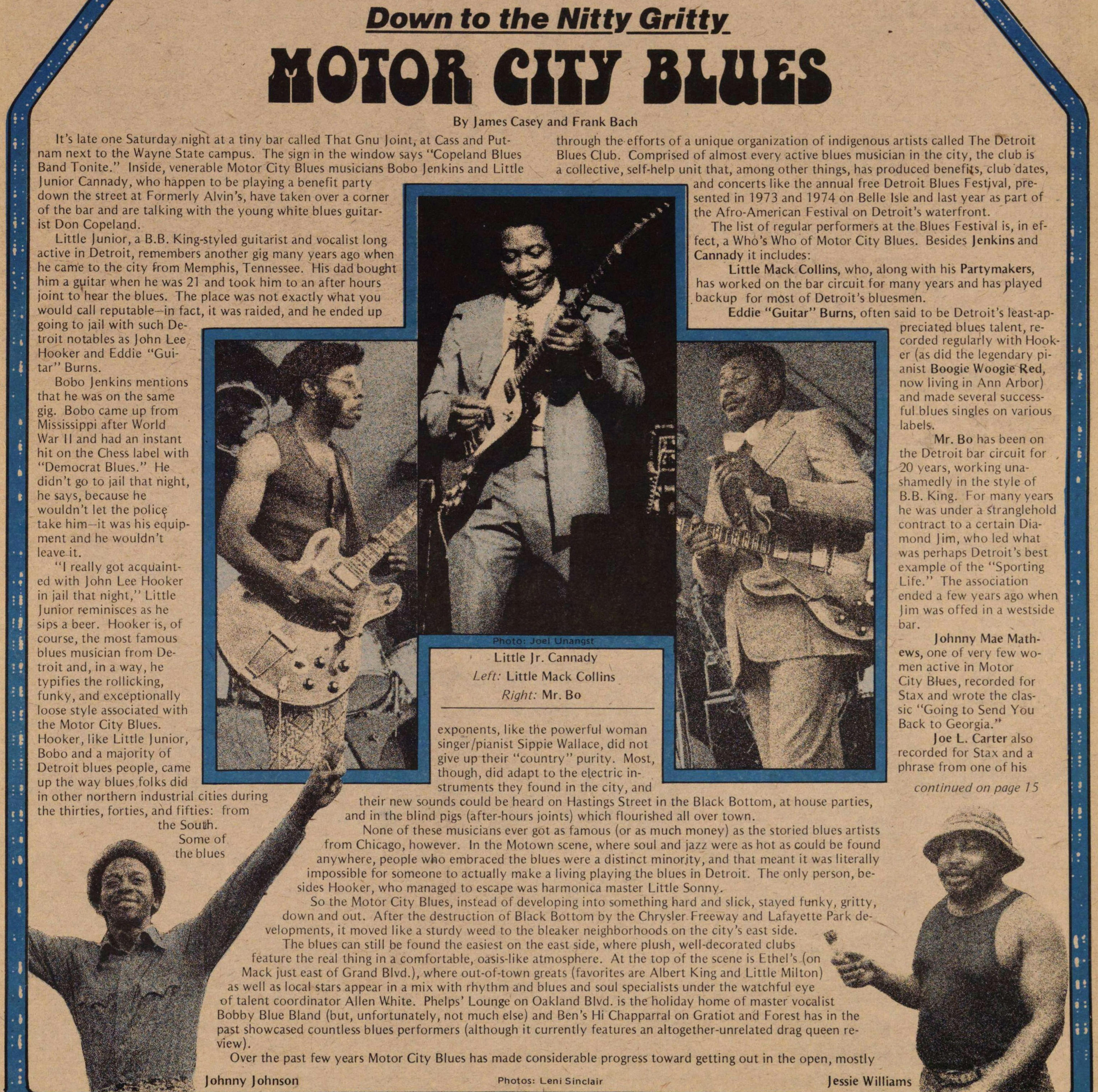 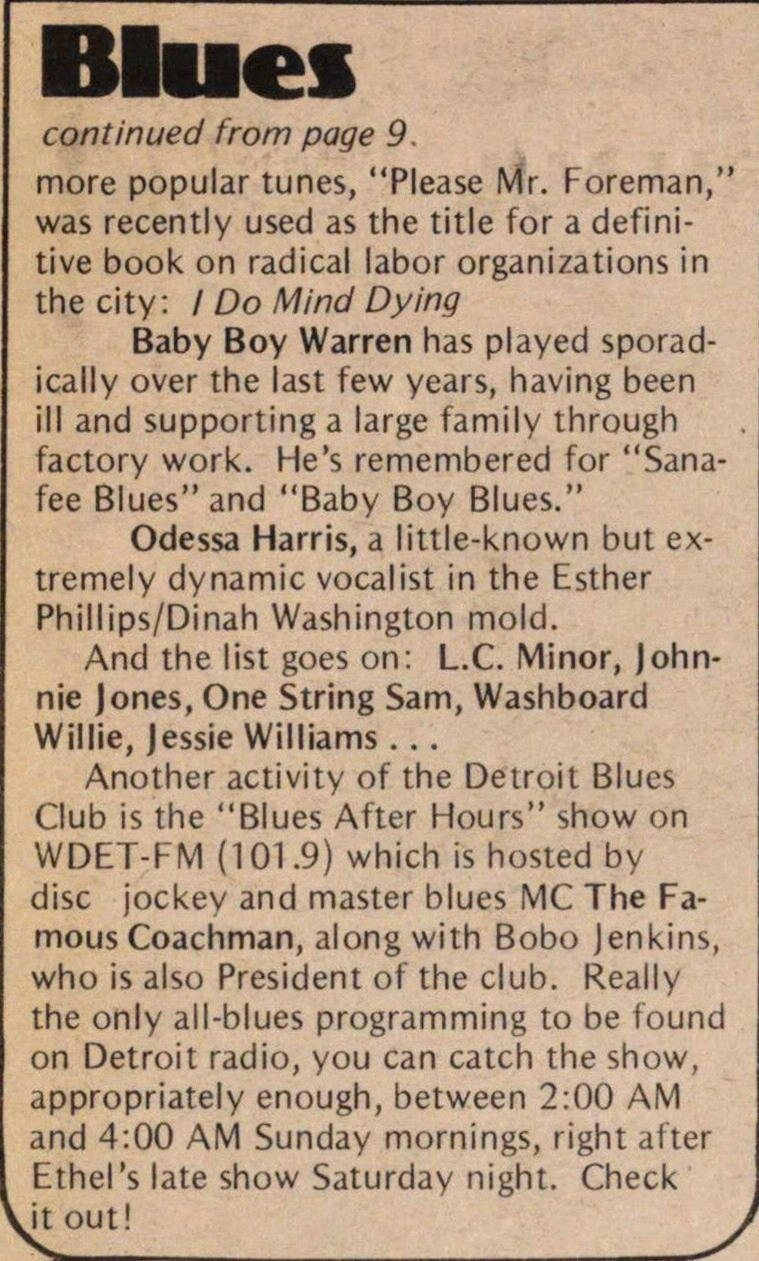 Down to the Nitty Gritty

It's late one Saturday night at a tiny bar called That Gnu Joint, at Cass and Putnam next to the Wayne State campus. The sign in the window says "Copeland Blues Band Tonite." Inside, venerable Motor City Blues musicians Bobo Jenkins and Little Junior Cannady, who happen to be playing a benefit party down the street at Formerly Alvin's, have taken over a corner of the bar and are talking with the young white blues guitarist Don Copeland.

Little Junior, a B.B. King-styled guitarist and vocalist long active in Detroit, remembers another gig many years ago when he came to the city from Memphis, Tennessee. His dad bought him a guitar when he was 21 and took him to an after hours joint to hear the blues. The place was not exactly what you would call reputable-in fact, it was raided, and he ended up going to jail with such Detroit notables as John Lee Hooker and Eddie "Guitar" Burns.

Bobo Jenkins mentions that he was on the same gig. Bobo came up from Mississippi after World War II and had an instant hit on the Chess label with "Democrat Blues." He didn't go to jail that night, he says, because he wouldn't let the police take him-it was his equipment and he wouldn't leave it.

"I really got acquainted with John Lee Hooker in jail that night," Little Junior reminisces as he sips a beer. Hooker is, of course, the most famous blues musician from Detroit and, in a way, he typifies the rollicking, funky, and exceptionally loose style associated with the Motor City Blues. Hooker, like Little Junior, Bobo and a majority of Detroit blues people, came up the way blues folks did in other northern industrial cities during the thirties, forties, and fifties: from the South.

Some of the blues exponents, like the powerful woman singer/pianist Sippie Wallace, did not give up their "country" purity. Most, though, did adapt to the electric instruments they found in the city, and their new sounds could be heard on Hastings Street in the Black Bottom, at house parties, and in the blind pigs (after-hours joints) which flourished all over town.

None of these musicians ever got as famous (or as much money) as the storied blues artists from Chicago, however. In the Motown scene, where soul and jazz were as hot as could be found anywhere, people who embraced the blues were a distinct minority, and that meant it was literally impossible for someone to actually make a living playing the blues in Detroit. The only person, besides Hooker, who managed to escape was harmonica master Little Sonny.

So the Motor City Blues, instead of developing into something hard and slick, stayed funky, gritty, down and out. After the destruction of Black Bottom by the Chrysler Freeway and Lafayette Park developments, it moved like a sturdy weed to the bleaker neighborhoods on the city's east side.

The blues can still be found the easiest on the east side, where plush, well-decorated clubs feature the real thing in a comfortable, oasis-like atmosphere. At the top of the scene is Ethel's (on Mack just east of Grand Blvd.), where out-of-town greats (favorites are Albert King and Little Milton) as well as local stars appear in a mix with rhythm and blues and soul specialists under the watchful eye of talent coordinator Allen White. Phelps' Lounge on Oakland Blvd. is the holiday home of master vocalist Bobby Blue Bland (but, unfortunately, not much else) and Ben's Hi Chapparral on Gratiot and Forest has in the past showcased countless blues performers (although it currently features an altogether-unrelated drag queen review).

Over the past few years Motor City Blues has made considerable progress toward getting out in the open, mostly through the efforts of a unique organization of indigenous artists called The Detroit Blues Club. Comprised of almost every active blues musician in the city, the club is a collective, self-help unit that, among other things, has produced benefits, club dates, and concerts like the annual free Detroit Blues Festival, presented in 1973 and 1974 on Belle Isle and last year as part of the Afro-American Festival on Detroit's waterfront.

The list of regular performers at the Blues Festival is, in effect, a Who's Who of Motor City Blues. Besides Jenkins and Cannady it includes:

Little Mack Collins, who, along with his Partymakers, has worked on the bar circuit for many years and has played backup for most of Detroit's bluesmen.

Mr. Bo has been on the Detroit bar circuit for 20 years, working unashamedly in the style of B.B. King. For many years he was under a Stranglehold contract to a certain Diamond Jim, who led what was perhaps Detroit's best example of the "Sporting Life." The association ended a few years ago when Jim was offed in a westside bar.

Johnny Mae Mathews, one of very few women active in Motor City Blues, recorded for Stax and wrote the classic "Going to Send You Back to Georgia."

Joe L. Carter also recorded for Stax and a phrase from one of his

more popular tunes, "Please Mr. Foreman," was recently used as the title for a definitive book on radical labor organizations in the city: I Do Mind Dying

Baby Boy Warren has played sporadically over the last few years, having been iII and supporting a large family through factory work. He's remembered for "Sanafee Blues" and "Baby Boy Blues."

Another activity of the Detroit Blues Club is the "Blues After Hours" show on WDET-FM (101.9) which is hosted by disc jockey and master blues MC The Famous Coachman, along with Bobo Jenkins, who is also President of the club. Really the only all-blues programming to be found on Detroit radio, you can catch the show, appropriately enough, between 2:00 AM and 4:00 AM Sunday mornings, right after Ethel's late show Saturday night. Check it out!