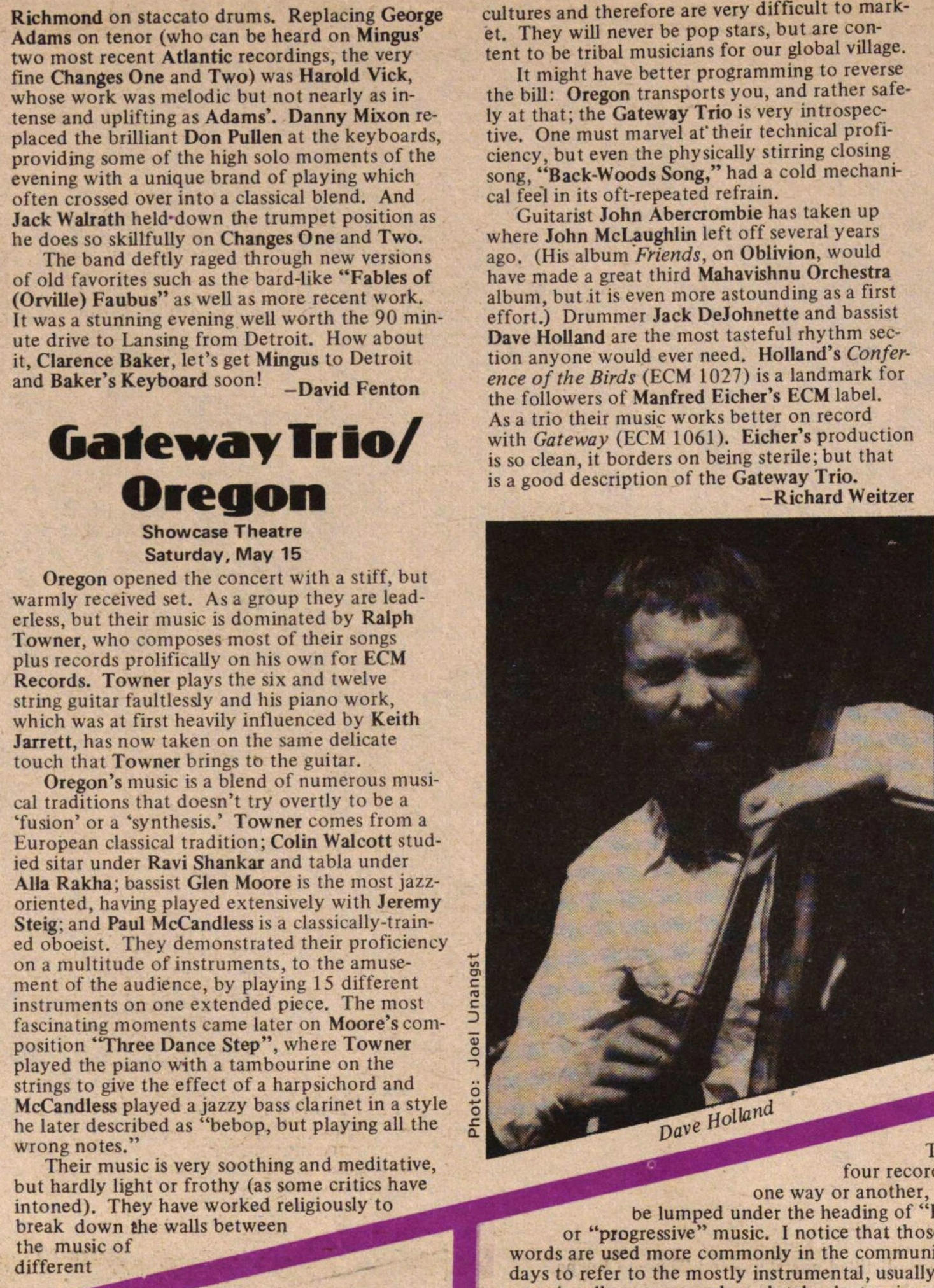 Oregon opened the concert with a stiff, but warmly received set. As a group they are leaderless, but their music is dominated by Ralph Towner, who composes most of their songs plus records prolifically on his own for ECM Records. Towner plays the six and twelve string guitar faultlessly and his piano work, which was at first heavily influenced by Keith Jarrett, has now taken on the same delicate touch that Towner brings to the guitar.

Oregon 's music is a blend of numerous musical traditions that doesn't try overtly to be a 'fusion' or a 'synthesis.' Towner comes from a European classical tradition; Colin Walcott studied sitar under Ravi Shankar and tabla under Alla Rakha; bassist Glen Moore is the most jazz oriented, having played extensively with Jeremy Steig: and Paul McCandless is a classically-trained oboeist. They demonstrated their proficiency on a multitude of instruments, to the amusement of the audience, by playing 15 different instruments on one extended piece. The most fascinating moments came later on Moore's composition "Three Dance Step", where Towner played the piano with a tambourine on the strings to give the effect of a harpsichord and McCandless played a jazzy bass clarinet in a style he later described as "bebop, but playing all the wrong notes."

Their music is very soothing and meditative, but hardly light or frothy (as some critics have intoned). They have worked religiously to break down the walls between the music of different cultures and therefore are very difficult to market.
They will never be pop stars, but are content to be tribal musicians for our global village. It might have better programming to reverse the bill: Oregon transports you, and rather safely at that; the Gateway Trio is very introspective. One must marvel at their technical proficiency, but even the physically stirring closing song, "Back-Woods Song," had a cold mechanical feel in its oft-repeated refrain.

Guitarist John Abercrombie has taken up where John McLaughlin left off several years ago. (His album 'Friends, on Oblivion, would have made a great third Mahavishnu Orchestra album, but it is even more astounding as a first effort.) Drummer Jack DeJohnette and bassist Dave Holland are the most tasteful rhythm section anyone would ever need. Holland's Conference of the Birds (ECM 1027) is a landmark for the followers of Manfred Eicher's ECM label. As a trio their music works better on record with Gateway (ECM 1061). Eicher's production is so clean, it borders on being sterile; but that is a good description of the Gateway Trio.