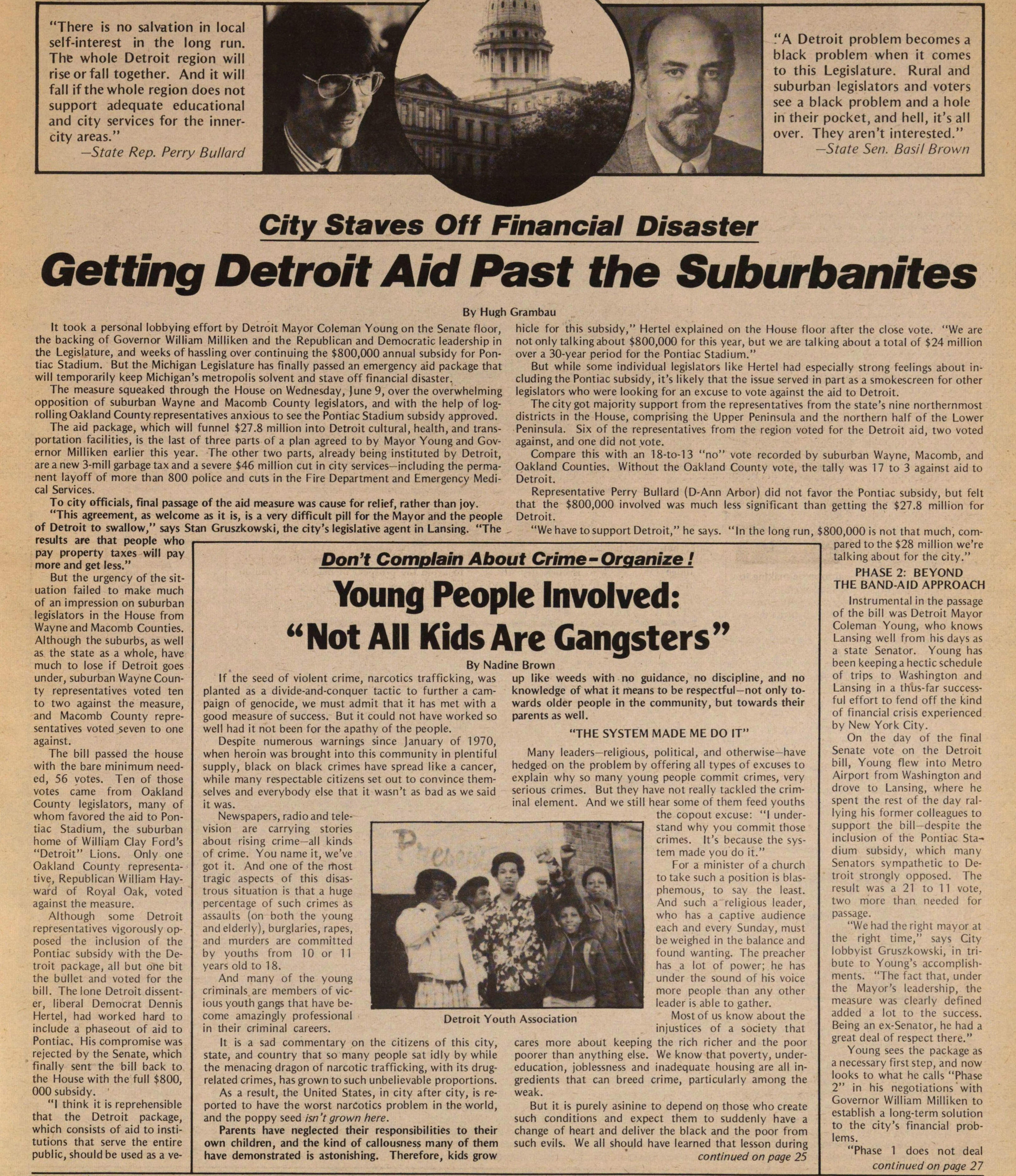 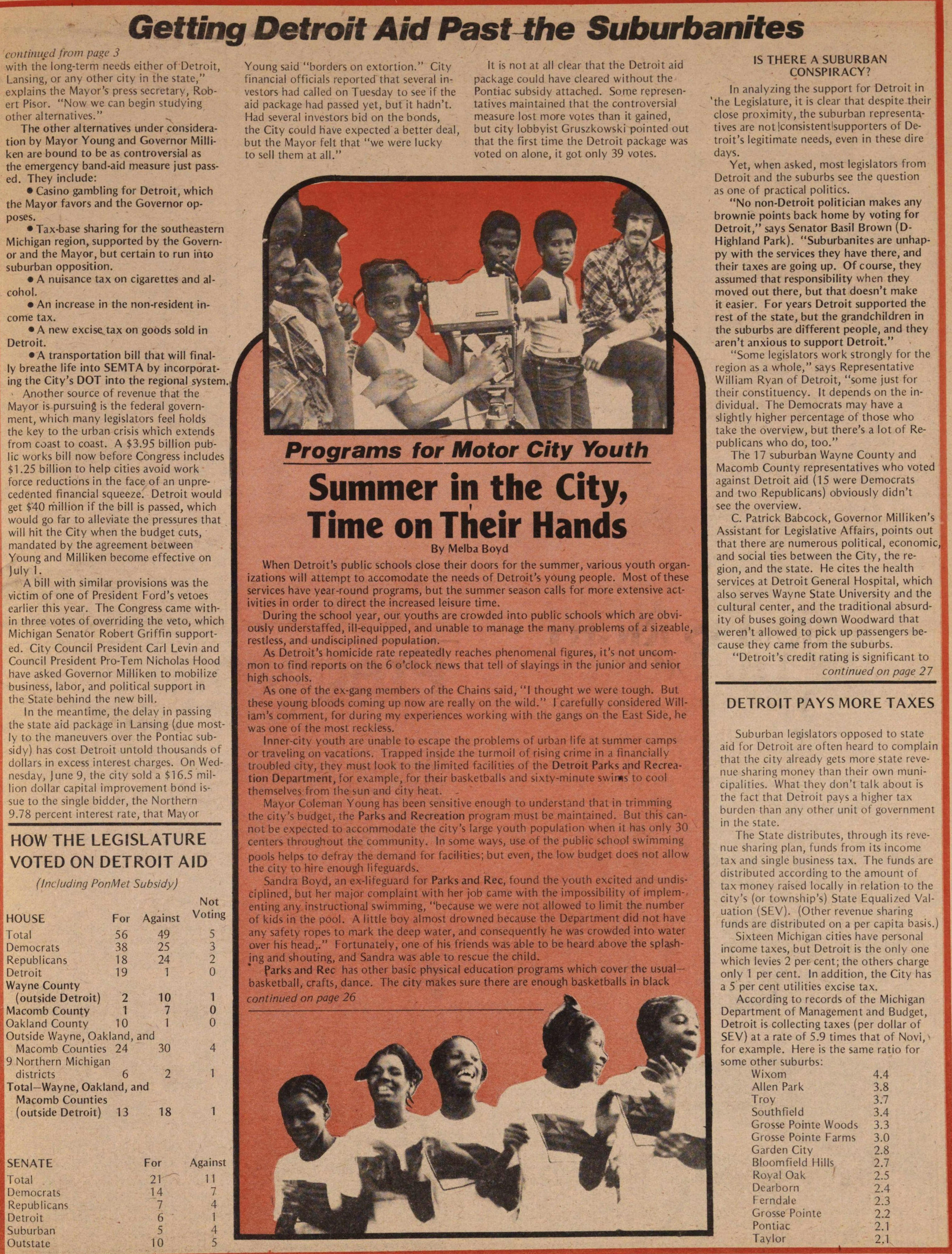 "There is no salvation in local

self-interest in the long run.

The whole Detroit region will

rise or fall together.  And it will

fall if the whole region does not

and city services for the inner-

"A Detroit problem becomes a

black problem when it comes

to this Legislature.  Rural and

see a black problem and a hole

in their pocket, and hell, it's all

Getting Aid Past the Suburbanites

the Legislature, and weeks of hassling over continuing the $800,000 annual subsidy for Pon-

tiac Stadium. But the Michigan Legislature has finally passed an emergency aid package that

The measure squeaked through the House on Wednesday, June 9, over the overwhelming

opposition of suburban Wayne and Macomb County legislators, and with the help of log-

The aid package, which will funnel $27.8 million into Detroit cultural, health, and trans-

portation facilities, is the last of three parts of a plan agreed to by Mayor Young and Gov-

ernor Milliken earlier this year. The other two parts, already being instituted by Detroit,

To city officials, final passage of the aid measure was cause for relief, rather than joy.

"This agreement, as welcome as it is, is a very difficult pill for the Mayor and the people

of Detroit to swallow," says Stan Gruszkowski, the city's legislative agent in Lansing. "The

results are that people who

more and get less."

But the urgency of the sit-

uation failed to make much

of an impression on suburban

legislators n the House from

Although the suburbs, as well

as the state as a whole, have

much to lose if Detroit goes

to two against the measure,

sentatives voted seven to one

The bill passed the house

with the bare minimum need-

County legislators, many of

whom favored the aid to Pon-

"Detroit" Lions. Only one

posed the inclusion of the

Pontiac subsidy with the De-

troit package, all but one bit

the bullet and voted for the

Hertel, had worked hard to

include a phaseout of aid to

Pontiac, His compromise was

rejected by the Senate, which

finally sent the bill back to

"I think it is reprehensible

that the Detroit package,

which consists of aid to insti-

tutions that serve the entire

public, should be used as a ve-

hicle for this subsidy," Hertel explained on the House floor after the close vote. "We are

over a 30-year period for the Pontiac Stadium."

cluding the Pontiac subsidy, it's likely that the issue served in part as a smokescreen for other

legislators who were looking for an excuse to vote against the aid to Detroit.

districts n the House, comprising the Upper Península and the northern half of the Lower

Península. Six of the representatives from the region voted for the Detroit aid, two voted

against, and one did not vote.

Compare this with an 18-to-13 "no" vote recorded by suburban Wayne, Macomb, and

Representative Perry Bullard (D-Ann Arbor) did not favor the Pontiac subsidy, but felt

that the $800,000 involved was much less significant than getting the $27.8 million for

pared to the $28 million we're

talking about for the city."

Instrumental in the passage

of the bill was Detroit Mayor

Lansing well from his days as

a state Senator. Young has

been keeping a hectic schedule

of trips to Washington and

Lansing in a thus-far success-

ful effort to fend off the kind

On the day of the final

Senate vote on the Detroit

Airport from Washington and

drove to Lansing, where he

spent the rest of the day ral-

lying his former colleagues to

support the bill- despite the

inclusion of the Pontiac Sta-

dium subsidy, which many

two more than needed for

"We had the right mayor at

ments. "The fact that, under

the Mayor's leadership, the

added a lot to the success.

Being an ex-Senator, he had a

great deal of respect there."

Young sees the package as

a necessary first step, and now

looks to what he calis "Phase

2" in his negotiations with

to establish a long-term solution

to the city's financial prob-

"Phase 1 does not deal

Getting Detroit Aid Past the Suburbanites

with the long-term needs either of Detroit,

Lansing, or any other city in the state,"

The other alternatives under considera-

ken are bound to be as controversial as

-Casino gambling for Detroit, which

the Mayor favors and the Governor op-

-Tax-base sharing for the southeastern

Michigan region, supported by the Govern-

or and the Mayor, but certain to run into

-A nuisance tax on cigarettes and alcohol

-An increase in the non-resident income tax

-A new excise tax on goods sold in Detroit.

-A transportaion bill that will final-

ing the City's DOT into the regional system.

Another source of revenue that the

Mayor is pursuing is the federal govern-

ment, which many legislators feel holds

the key to the urban crisis which extends

force reductions n the face of an unpre-

get $40 million if the bill is passed, which

would go far to alleviate the pressures that

will hit the City when the budget cuts,

mandated by the agreement between

Young and Milliken become effective on

A bill with similar provisions was the

victim of one of President Ford's vetoes

earlier this year. The Congress came with-

in three votes of overriding the veto, which

have asked Governor Milliken to mobilize

business, labor, and political support in

the State behind the new bill.

In the meantime, the delay in passing

the state aid package in Lansing (due most-

ly to the maneuvers over the Pontiac sub-

sue to the single bidder, the Northern

financial officials reported that several in-

vestors had called on Tuesday to see if the

aid package had passed yet, but it hadn't.

Had several investors bid on the bonds,

the City could have expected a better deal,

but the Mayor felt that "we were lucky

to sell them at all."

It is not at all clear that the Detroit aid

package could have cleared without the

tatives maintained that the controversial

but city lobbyist Gruszkowski pointed out

that the flrst time the Detroit package was

voted on alone, it got only 39 votes.

In analysing the support for Detroit in

the Legislature, it is clear that despite their

tives are not consistent supporters of De-

Yet, when asked, most legislators from

Detroit and the suburbs see the question

as one of practical politics.

"No non-Detroit politician makes any

brownie points back home by voting for

py with the services they have there, and

their taxes are going up. Of course, they

assumed that responsibility when they

moved out there, but that doesn't make

it easier. For years Detroit supported the

rest of the state, but the grandchildren in

the suburbs are different people, and they

"Some legislators work strongly for the

region as a whole," says Representative

William Ryan of Detroit, "some just for

their constituency. It depends on the

individual. The Democrats may have a

slightly higher percentage of those who

take the overview, but there's a lot of Re-

publicans who do, too."

The 17 suburban Wayne County and

against Detroit aid (15 were Democrats

Assistant for Legislative Affairs, points out

that there are numerous political, economic

and social ties between the City, the re-

gion, and the state. He cites the health

services at Detroit General Hospital, which

cultural center, and the traditional absurd-

ity of buses going down Woodward that

weren't allowed to pick up passengers be-

cause they came from the suburbs.

"Detroit's credit rating is significant to

Outside Wayne, Oakland and Macomb Counties

aid for Detroit are often heard to complain

that the city already gets more state reve-

nue sharing money than their own muni-

cipalities. What they don't talk about is

the fact that Detroit pays a higher tax

burden than any other unit of government

The State distributes, through its reve-

tax and single business tax. The funds are

distributed according to the amount of

tax money raised locally in relation to the

funds are distributed on a per capita basis.)

income taxes, but Detroit is the only one

which levies 2 per cent; the others charge

only 1 per cent. In addition, the City has

a 5 per cent Utilities excise tax.

According to records of the Michigan

Department of Management and Budget,

for example. Here is the same ratio for