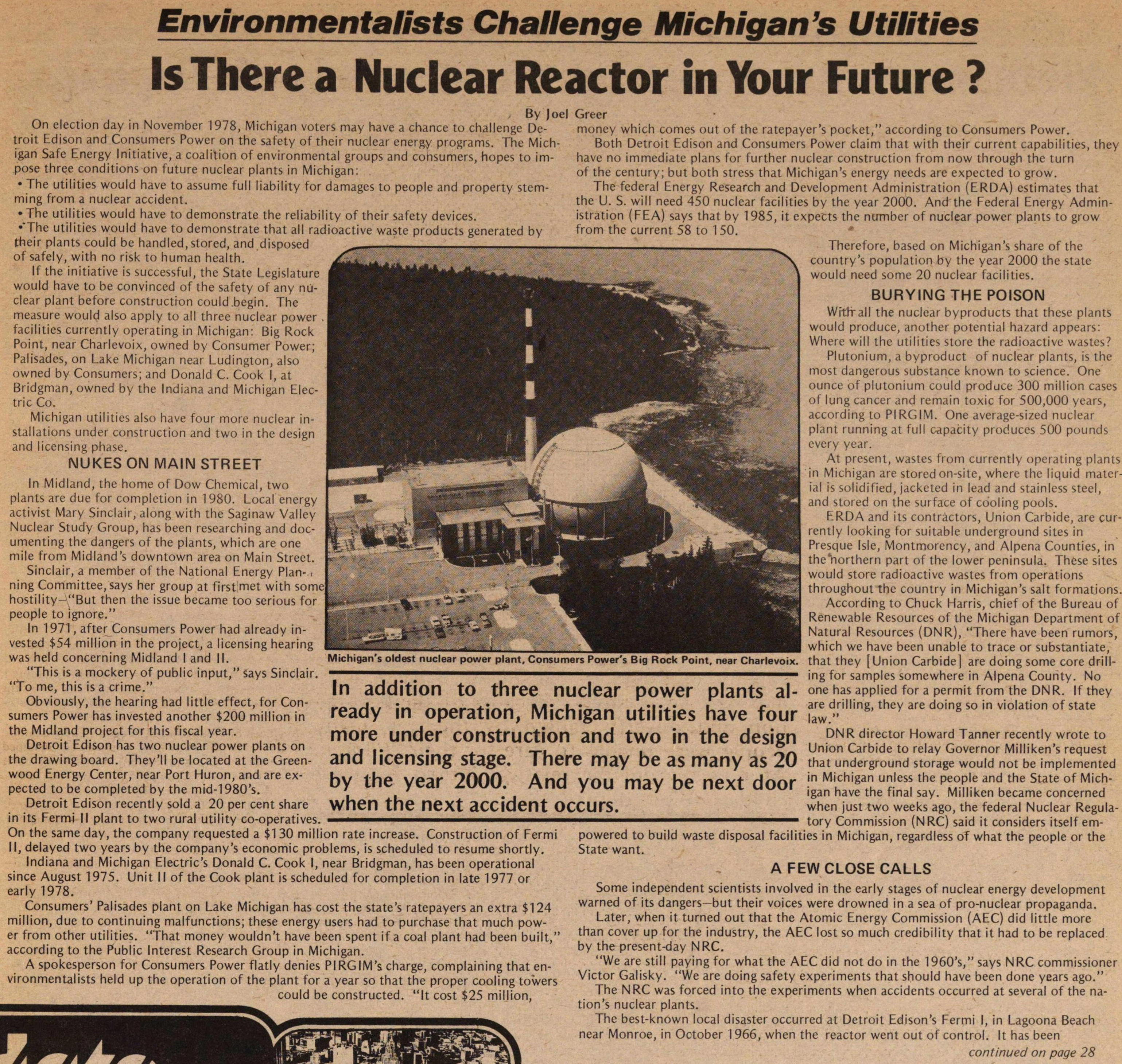 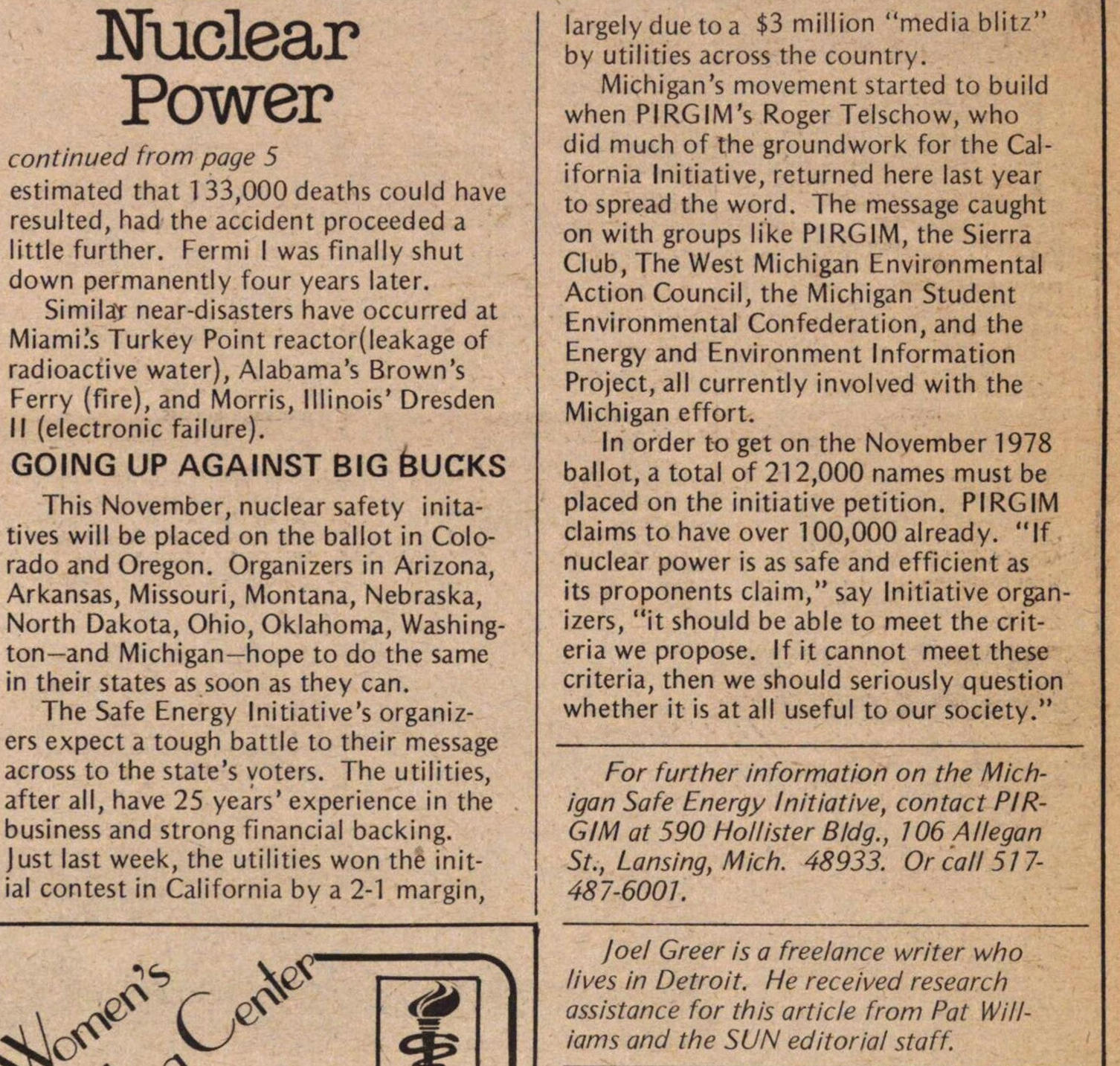 On election day in November 1978, Michigan voters may have a chance to challenge Detroit Edison and Consumers Power on the safety of their nuclear energy programs. The Michigan Safe Energy Initiative, a coalition of environmental groups and consumers, hopes to impose three conditions on future nuclear plants in Michigan: The Utilities would have to assume full liability for damages to people and property stemming from a nuclear accident.

~The Utilities would have to demonstrate the reliability of their safety devices.

~The Utilities would have to demonstrate that all radioactive waste products generated by their plants could be handled, stored, and disposed of safely, with no risk to human health.

If the initiative s successful, the State Legislature would have to be convinced of the safety of any nuclear plant before construction could .begin. The measure would also apply to all three nuclear power facilities currently operating in Michigan: Big Rock Point, near Charlevoix, owned by Consumer Power; Palisades, on Lake Michigan near Ludington, also owned by Consumers; and Donald C. Cook I, at Bridgman, owned by the Indiana and Michigan Electric Co.

Michigan Utilities also have four more nuclear installations under construction and two in the design and licensing phase.

In Midland, the home of Dow Chemical, two plants are due for completion in 1980. Local energy activist Mary Sinclair, along with the Saginaw Valley Nuclear Study Group, has been researching and documenting the dangers of the plants, which are one mile from Midland's downtown area on Main Street.

Sinclair, a member of the National Energy planing Committee.says her group at first met with some hostility-"But then the issue became too serious for people to ignore."

In 1971 , after Consumers Power had already invested $54 million in the project, a licensing hearing was held concerning Midland I and II.

"This is a mockery of public input," says Sinclair. "To me, this is a crime."

Obviously, the hearing had little effect, for Consumers Power has invested another $200 million in the Midland project for this fiscal year.

Detroit Edison has two nuclear power plants on the drawing board. They'll be located at the Greenwood Energy Center, near Port Huron, and are expected to be completed by the mid-1980's.

Detroit Edison recently sold a 20 per cent share in its Fermi II plant to two rural utility co-operatives. On the same day, the company requested a $130 million rate increase. Construction of Fermi II, delayed two years by the company's economic problems, is scheduled to resume shortly.

Indiana and Michigan Electric's Donald C. Cook I, near Bridgman, has been operational since August 1975. Unit II of the Cook plant is scheduled for completion in late 1977 or early 1978.

Consumers' Palisades plant on Lake Michigan has cost the state's ratepayers an extra $124 million, due to continuing malfunctions; these energy users had to purchase that much power from other Utilities. "That money wouldn't have been spent if a coal plant had been built," according to the Public Interest Research Group in Michigan.

A spokesperson for Consumers Power flatly denies PIRGIM's charge, complaining that environmentalists held up the operation of the plant for a year so that the proper cooling towers could be constructed. "It cost $25 million, money which comes out of the ratepayer's pocket," according to Consumers Power.

Both Detroit Edison and Consumers Power claim that with their current capabilities, they have no immediate plans for further nuclear construction from now through the turn of the century; but both stress that Michigan's energy needs are expected to grow.

The federal Energy Research and Development Administration (ERDA) estimates that the U. S. will need 450 nuclear facilities by the year 2000. And the Federal Energy Administration (FEA) says that by 1985, it expects the number of nuclear power plants to grow from the current 58 to 150.

Therefore, based on Michigan 's share of the country's population by the year 2000 the state would need some 20 nuclear facilities.

With all the nuclear byproducts that these plants would produce, another potential hazard appears: Where will the Utilities store the radioactive wastes?

Plutonium, a byproduct of nuclear plants, is the most dangerous substance known to science. One ounce of plutonium could produce 300 million cases of lung cancer and remain toxic for 500,000 years, according to PIRGIM. One average-sized nuclear plant running at full capacity produces 500 pounds every year.

At present, wastes from currently operating plant; in Michigan are stored on-site, where the liquid material is solidified, jacketed in lead and stainless steel, and stored on the surface of cooling pools.

ERDA and ts contractors, Union Carbide, are currently looking for suitable underground sites in Presque Isle, Montmorency, and Alpena Counties, in the northern part of the lower peninsula. These sites would store radioactive wastes from operations throughout the country in Michigan's salt formations.

According to Chuck Harris, chief of the Bureau of Renewable Resources of the Michigan Department ol Natural Resources (DNR), "There have been rumors, which we have been unable to trace or substantiate, that they [Union Carbide] are doing some core drilling for samples somewhere in Alpena County. No one has applied for a permit from the DNR. If they are drilling, they are doing so in violation of state law."

DNR director Howard Tanner recently wrote to Union Carbide to relay Governor Milliken's request that underground storage would not be implemented in Michigan unless the people and the State of Michigan have the final say. Milliken became concerned when just two weeks ago, the federal Nuclear Regulatory Commission (NRC) said it considers itself powered to build waste disposal facilities in Michigan, regardless of what the people or the State want.

A FEW CLOSE CALLS             Some independent scientists involved in the early stages of nuclear energy development warned of its dangers--- but their voices were drowned in a sea of pro-nuclear propaganda.

Later, when it turned out that the Atomic Energy Commission (AEC) did little more than cover up for the industry, the AEC lost so much credibility that it had to be replaced by the present-day NRC.

"We are still paying for what the AEC did not do in the 1960's," says NRC commissioner Victor Galisky. "We are doing safety experiments that should have been done years ago."

The NRC was forced into the experiments when accidents occurred at several of the nation's nuclear plants.

The best-known local disaster occurred at Detroit Edison's Fermi I, in Lagoona Beach near Monroe, in October 1 966, when the reactor went out of control. It has been estimated that 133,000 deaths could have resulted, had the accident proceeded a little further. Fermi I was finally shut down permanently four years later.

GOING UP AGAINST BIG BUCKS

This November, nuclear safety initiatives will be placed on the ballot in Colorado and Oregon. Organizers in Arizona, Arkansas, Missouri, Montana, Nebraska, North Dakota, Ohio, Oklahoma, Washington---and Michigan--- hope to do the same in their states as soon as they can.

The Safe Energy Initiative's organizers expect a tough battle to their message across to the state's voters. The Utilities, after all, have 25 years' experience in the business and strong financial backing. Just last week, the Utilities won the initial contest n California by a 2-1 margin, largely due to a $3 million "media blitz" by Utilities across the country.

Michigan 's movement started to build when PIRGIM's Roger Telschow, who did much of the groundwork for the California Initiative, returned here last year to spread the word. The message caught on with groups like PIRGIM, the Sierra Club, The West Michigan Environmental Action Council, the Michigan Student Environmental Confederation, and the Energy and Environment Information Project, all currently involved with the Michigan effort.

In order to get on the November 1978 ballot, a total of 212,000 names must be placed on the initiative petition. PIRGIM claims to have over 100,000 already. "If nuclear power is as safe and efficient as its proponents claim," say Initiative organizers, "it should be able to meet the criteria we propose. If it cannot meet these criteria, then we should seriously question whether it is at all useful to our society."