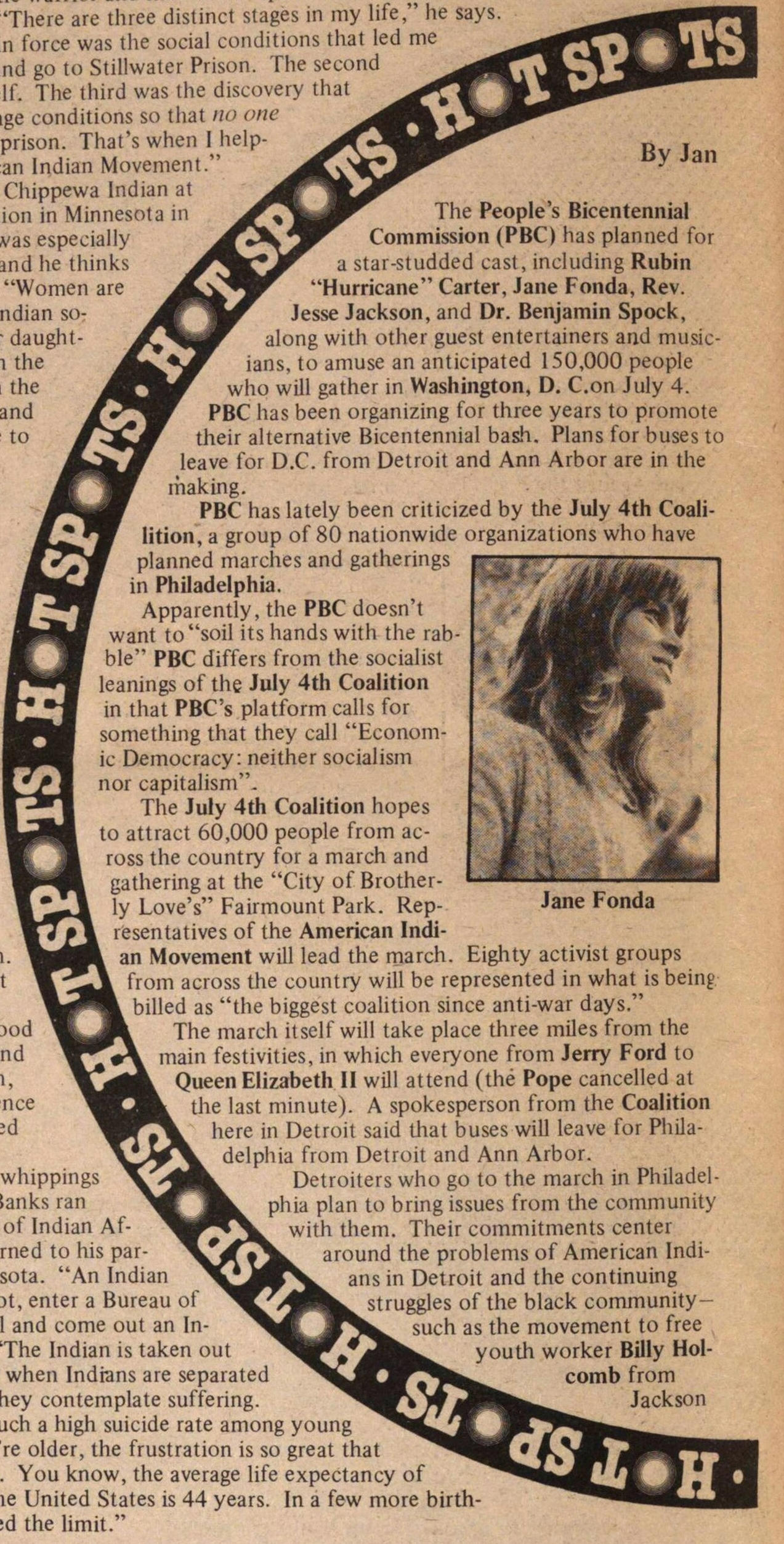 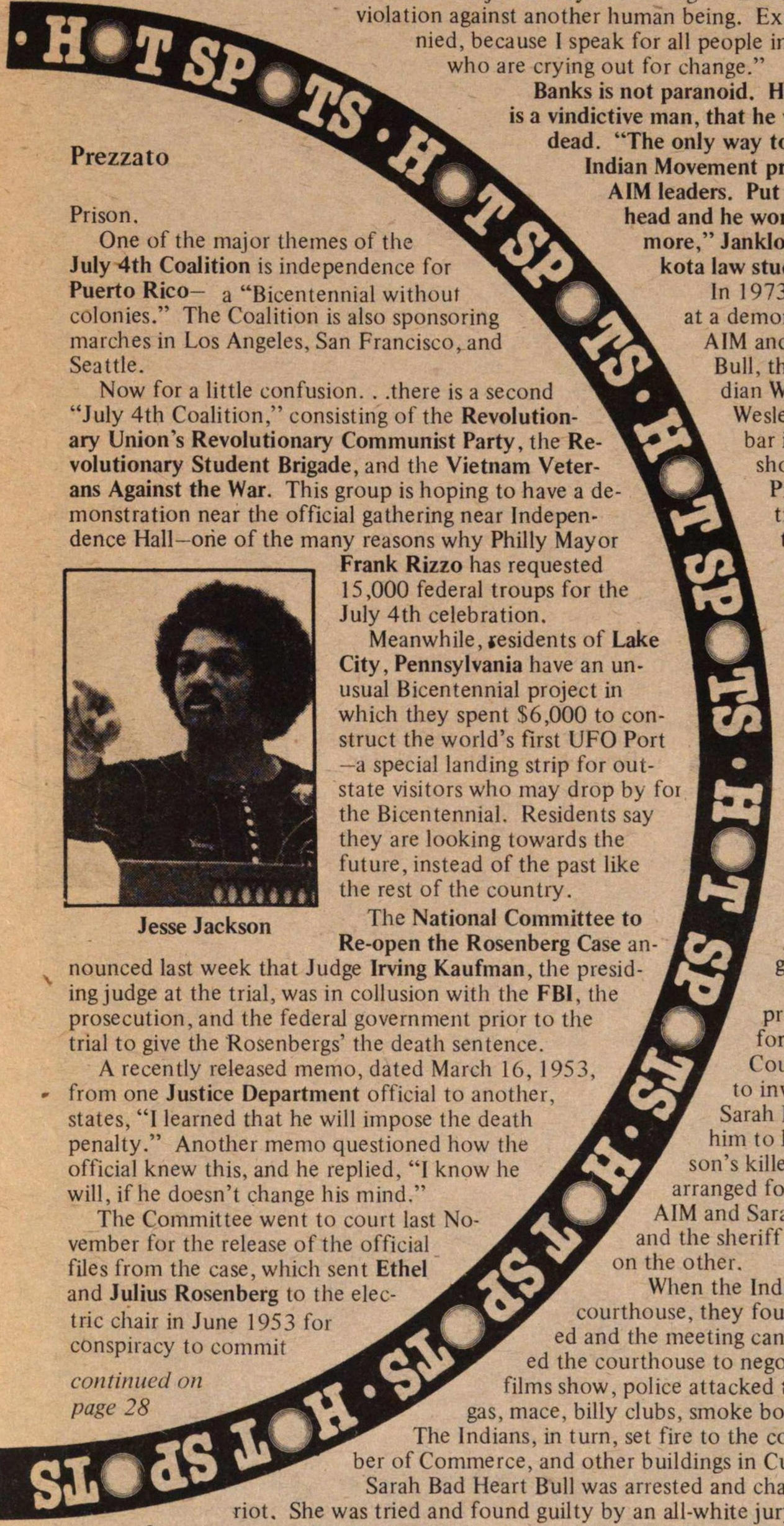 The People's Bicentennial Commission (PBC) has planned for a star-studded cast, including Rubin "Hurricane" Cater, Jane Fonda, Rev. Jesse Jackson, and Dr. Benjamin Spock, along with other guest entertainers and musicians, to amuse an anticipated 150,000 people who will gather in Washington, D.C. on July 4. PBC has been profaning for three years to promote their alternative Bicentennial bash. Plans for buses to leave for D.C. from Detroit and Ann Arbor are in the making.

PBC has lately been criticized by the July 4th Coalition, a group of 80 nationwide organizations who have planned marches and gatherings in Philadelphia.

Apparently, the PBC doesn't want to "soil its hands with the rabble" PBC differs from the socialist leanings of the July 4th Coalition in that PBC's platform calls for something that they call "Economic Democracy: neither socialism nor capitalism."

The July 4th Coalition hopes to attract 60,000 people from across the country for a march and gathering at the "City of Brotherly Love's" Fairmont Park. Representatives of the American Indian Movement will lead the march. Eighty activist groups from across the country will be represented in what is being billed "the biggest coalition since anti-war days."

The march itself will take place three miles from the main festivities, in which everyone from Jerry Ford to Queen Elizabeth II will attend (the Pope cancelled at the last minute). A spokesperson from the Coalition here in Detroit said that buses will leave for Philadelphia from Detroit and Ann Arbor.

Detroiters who go to the march in Philadelphia plan to bring issues from the community with the. Their commitments center around the problems of American Indians in Detroit and the continuing struggles of the black community - such as the movement to free youth worker Billy Holcomb from Jackson Prison.

One of the major themes of the July 4th Coalition is independence for Puerto Rico - a "Bicentennial without colonies." The Coalition is also sponsoring marches in Los Angeles, San Francisco, and Seattle.

Now for a little confusion... there is a second "July 4th Coalition," consisting of the Revolutionary Union's Revolutionary Communist Party, the Revolutionary Student Brigade, and the Vietnam Veterans Against the War. This group is hoping to have a demonstration near the official gathering near Independence Hall - one of the many reasons why Philly Mayor Frank Rizzo has requested 15,000 federal troops for the July 4th celebration.

Meanwhile, residents of Lake City, Pennsylvania have an unusual Bicentennial project in which they spent $6,000 to construct the world's first UFO Port - a special landing strip for out-state visitors who may drop by for the Bicentennial. Residents say they are looking towards the future, instead of the past like the rest of the country.

The National Committee to Re-open the Rosenberg Case announced last week that Judge Irving Kaufman, the presiding judge at the trial, was in collusion with the FBI, the prosecution, and the federal government prior to the trial to give the Rosenbergs' the death sentence.

A recently released memo, dated March 16, 1953, from one Justice Department official to another, states, "I learned that he will impose the death penalty." Another memo questioned how the official knew this, and he replied, "I know he will, if he doesn't change his mind."

The Committee went to court las November for the release of the official files form the case, which sent Ether and Julius Rosenberg to the electric chair in June 1953 for conspiracy to commit -