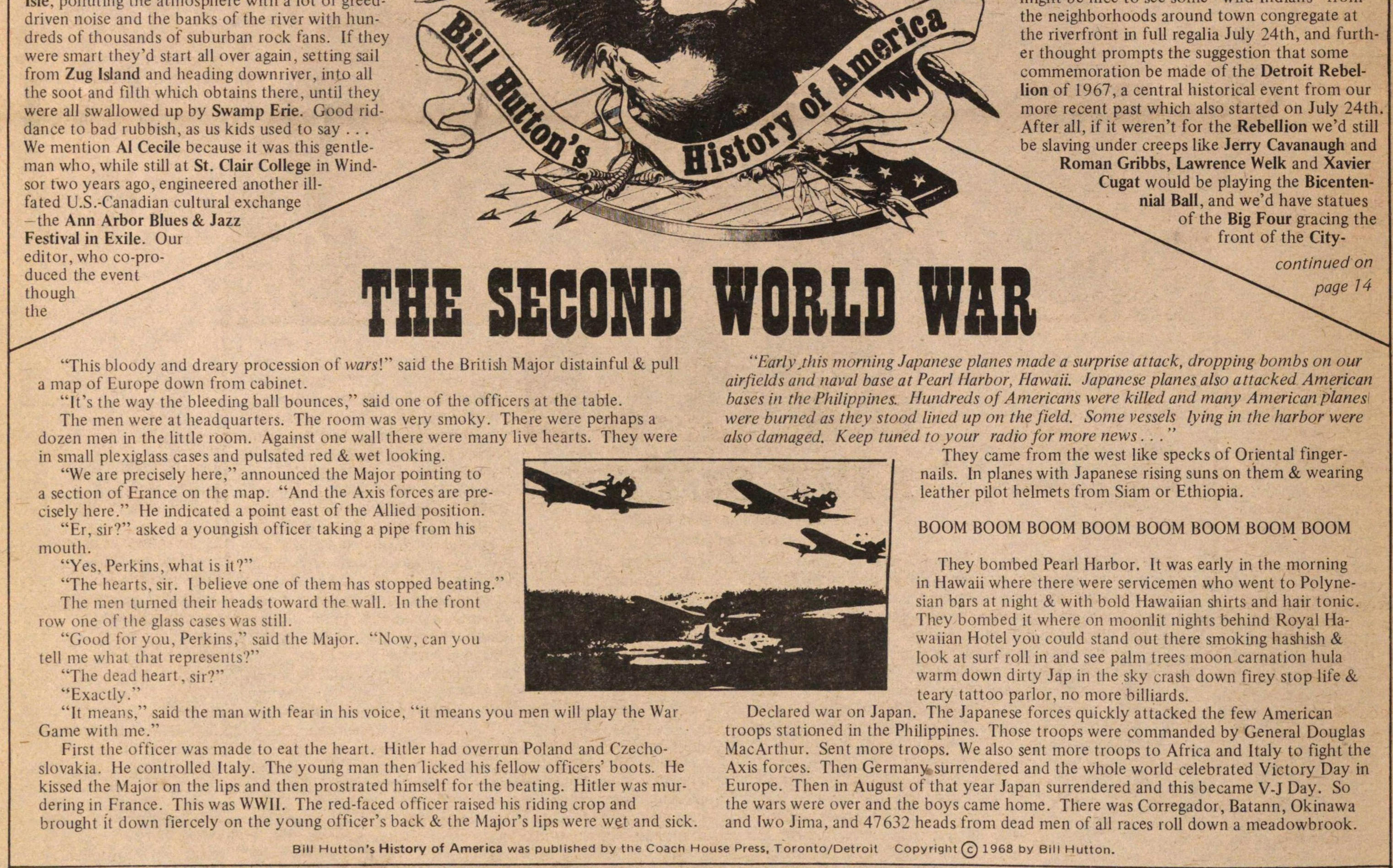 "This bloody and dreary procession of wars!" said the British Major distainful & pull a map of Europe down from the cabinet.

"Its the way the bleeding ball bounces," said one of the officers at the table.

The men were at headquarters. The room was very smoky. There were perhaps a dozen men in the little room. Against one wall there were many live hearts. They were in small plexiglass cases and pulsated red & wet looking.

"Er, sir?" asked a youngish officer taking a pipe from his mouth. "Yes, Perkins, what is it?"

"The hearts, sir. I believe one of them has stopped beating."

The men turned their heads toward the wall. In the front row, one of the glass cases was still.

"Good for you, Perkins," said the Major. "Now, can you tell me what that represents?"

"It means," said the man with fear in his voice. "it means you men will play the War Game with me."

First, the officer was made to eat the heart. Hitler had overrun Poland and Czechoslovakia. He controlled Italy. The young man then licked his fellow officers' boots. He kissed the Major on the lips and then prostrated himself for the beating. Hitler was murdering in France. This was WWII. The red-faced officer raised his riding crop and brought it down fiercely on the young officer's back & the Major's lips were wet and sick.

"Early this morning Japanese planes made a surprise attack, dropping bombs on our airfields and naval base at Pearl Harbor, Hawaii. Japanese planes also attacked American bases in the Philippines. Hundreds of Americans were killed and many American planes were burned as they stood lined up on the field. Some vessels lying in the harbor were also damaged. Keep tuned to your radio for more news ..."

They came from the west like specks of Oriental nails. In planes with Japanese rising suns on them & wearing leather pilot helmets from Siam or Ethiopia.

They bombed Pearl Harbor. It was early in the morning in Hawaii where there were servicemen who went to Polynesian bars at night & with bold Hawaiian shirts and hair tonic. They bombed it where on moonlit nights behind Royal Hawaiian Hotel you could stand out there smoking hashish & look at surf roll in and see palm trees moon carnation hula warm down dirty Jap in the sky crash down firey stop life & teary tattoo parlor, no more billiards.

Declared war on Japan. The Japanese forces quickly attacked the few American troops stationed in the Philippines. Those troops were commanded by General Douglas MacArthur. Sent more troops. We also sent more troops to África and Italy to fight the Axis forces. Then Germany surrendered and the whole world celebrated Victory Day in Europe. Then in August of that year, Japan surrendered and this became V-J Day. So the wars were over and the boys came home. There was Corregador, Batann, Okinawa, and Iwo Jima, and 47632 heads from dead men of all races roll down a meadowbrook.