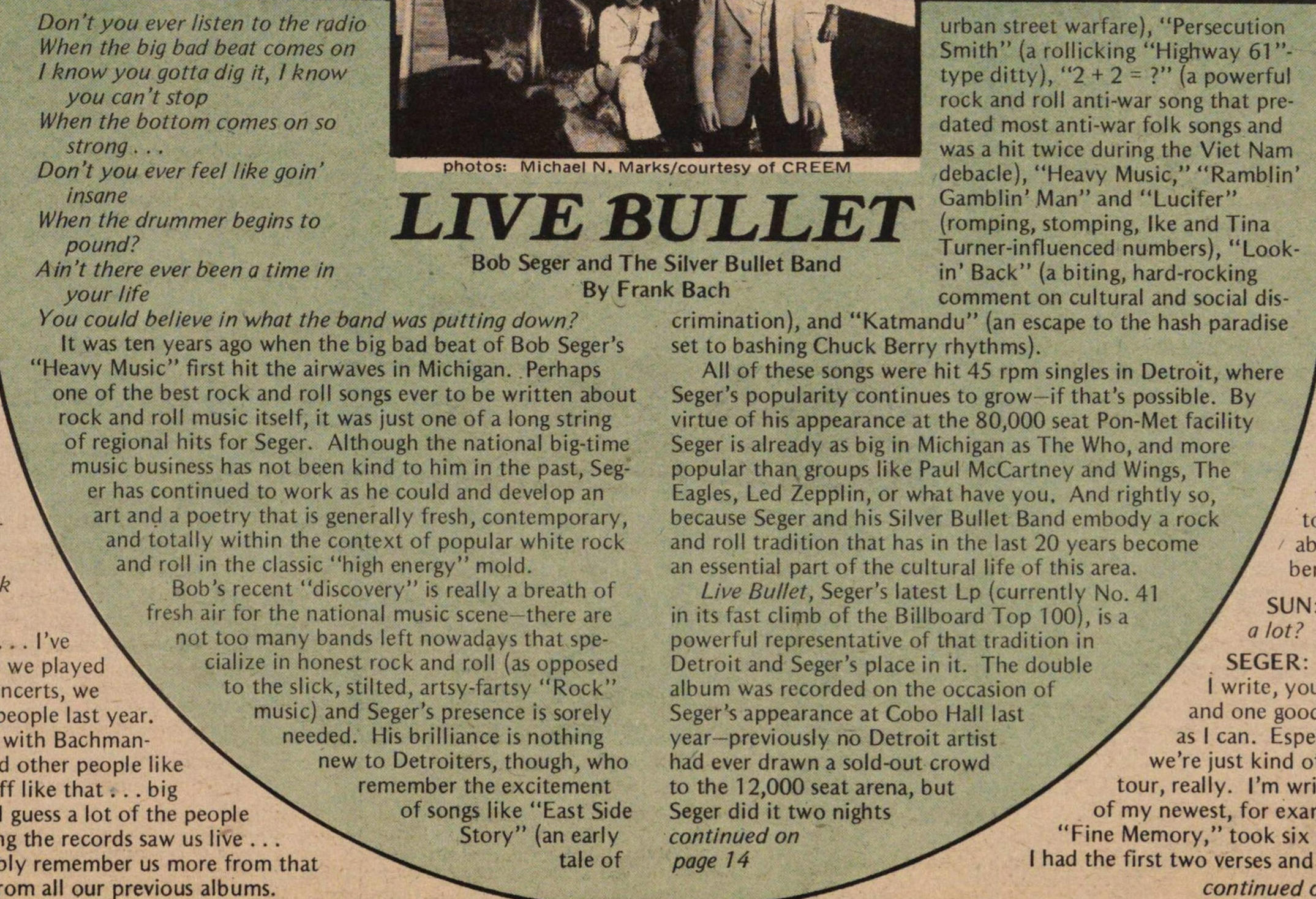 Don't you ever listen to the radio When the big bad beat comes on l know you gotta dig it, I know you can 't stop When the bottom comes on so strong . . . Don 't you ever feel like go in ' insane When the drummer begin s to pound? A in 't there ever been a time in your life You could believe in what the band was putting down? It was ten years ago when the big bad beat of Bob Seger's 'Heavy Music" first hit the airwaves in Michigan. Perhaps one of the best rock and roll songs ever to be written about rock and roll music itself, it was just one of a long string of regional hits for Seger. Although the national big-time music business has not been kind to him in the past, Seger has continued to work as he could and develop an V art and a poetry that is generally fresh, contemporary, and totally within the context of popular white rock and roll in the classic "high energy" mold. Bob's recent "discovery" is really a breath of fresh air for the national music scène- there are not too many bands lett nowadays that specialize in honest rock and roll (as opposed to the stick, stilted, artsy-fartsy "Rock" V music) and Seger's presence is sorely needed. His brilliance s nothing new to Detroiters, though, who remember the excitement of songs like "East Side s_ Story" (an early tale of urban street warfare), "Persecution Smith" (a rollicking "Highway 61 "- type ditty), "2 + 2 = ?" (a powerful rock and roll anti-war song that predated most anti-war folk songs and was a hit twice during the Viet Nam debacle), "Heavy Music," "Ramblin' Gamblin' Man" and "Lucifer" (romping, stomping, Ike and Tina Turner-influenced numbers), "Lookin' Back" (a biting, hard-rocking comment on cultural and social crimination), and "Katmandu" (an escape to the hash paradise set to bashing Chuck Berry rhythms). All of these songs were hit 45 rpm singles in Detroit, where Seger's popularity continúes to grow-if that's possible. By virtue of his appearance at the 80,000 seat Pon-Met facility Seger is already as big in Michigan as The Who, and more popular than groups like Paul McCartney and Wings, The Eagles, Led Zepplin, or wh-at have you. And rightly so, because Seger and his Silver Bullet Band embody a rock and roll tradition that has n the last 20 years become y an essential Dart of the cultural life of this área. - ■ v-jjlinil L IA ■ V V I II IV VU I IUI (Al I I 1 V V I II I IJ UI VLL Ve Bullet, Seger's latest Lp (currently No. 41 n ts fast clirjib of the Billboard Top 100), sa powerful representative of that tradition n Detroit and Seger's place in t. The doublé album was rccorded on the occasion of Seger's appearance at Cobo Hall last year- previously no Detroit artist r had ever drawn a sold-out crowd to the 1 2,000 seat arena, but Seger did it two nights .X continued on S page 14 n" LIVE BULLET corttinued f rom page 7 1 in a row on September 4 and 5, 1975. Needless to say, all four sides of this record smoke all the way through. A hot, fast-paced reading of Tina Turner's "Nutbush City Limits" is the sure-fire opener as well as the song currently getting the most radio play in Detroit; Seger and The Silver Bullet band followwith "Travelin' Man," "Beautiful Loser," and "Jody Girl," all in the melancholy laid back groove which Seger does every bit as well as, say, Joni Mitchell or any of the specialists in the field. Van Morrison's "IVe Been Working" shows off Seger's interpretive abilities again and, after another laid back original, "Turn the Page" (featuring Torn CartmeM's tasteful saxophone work), the Bullet band shuffles into Bob's supremely satiric tribute to the upper middle class, "UMC" (showing off a mean slide guitar by former Third Power star Drew Abbott). "Bo Diddley" is a throwback to Seger's former association with Dave Teagarden and Skip VanWinkle (which produced the Smokin' OP's record), and Silver Bullet does it here even better. During the last two sides of Live Bullet Seger and band perform a series of encores while MC Dan Carlisle bravely tries to control the notorious Detroit rock and roll audience. There are some real - ments of musical greatness here: "Ramblin' Gamblin' Man," "Heavy Music," "Katmandu," "Lookin' Back," and another classic Chuck Berry-based satire about long hairs on the road, "Get Out of Denvet": You look just like a commie And you might just be a member Get out of Denver, boy, get out of Denver And to wrap t up, Seger and the Silver Bullet Band salute Chuck Berry himself with the final encoré, a pull-out-all-thestops version of "Let t Rock." There's no doubt that this was one of those times when "You could believe n what the band was puttin' down." Following these performances at Cobo t was rumored that Seger and the members of the Silver Bullet would go their separate ways, having reached what could be considered the pinnacle of Seger's career. As t turned out, the success of this recording changed all that, finally creating an opening n the music business for these musicians who happen to be super-stars in Detroit. Let's hope they're with us for many more years to come.