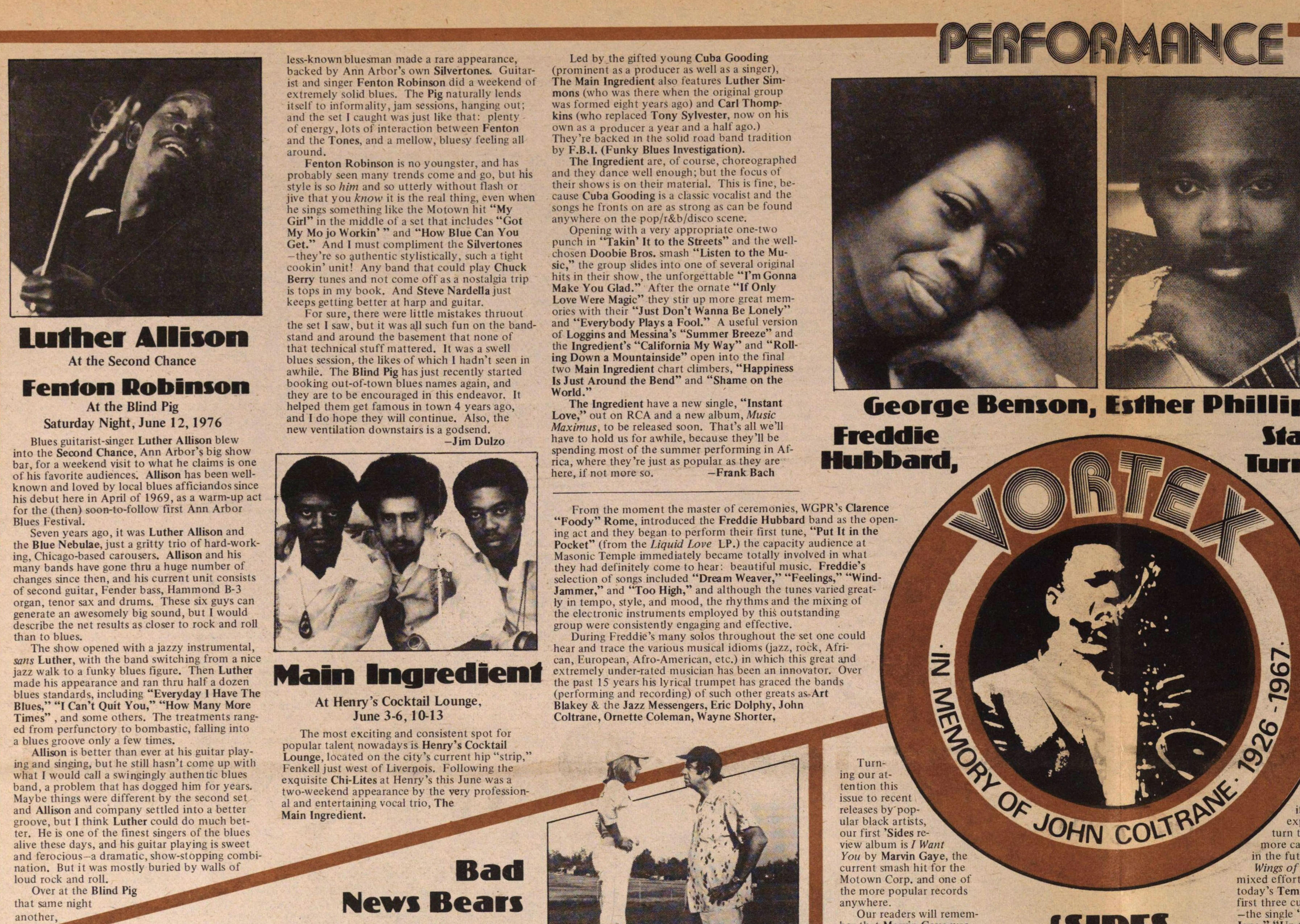 Luther Allison at the Second Chance

Blues guitarist-singer Luther Allison blew into the Second Chance, Ann Arbor's big show bar, for a weekend visit to what he claims is one of his favorite audiences. Allison has been well known and loved by local blues aficionados since his debut here in April of 1969, as a warm-up act for the (then) soon-to-follow first Ann Arbor Blues Festival.

Seven years ago, it was Luther Allison and the Blue Nebulae, just a gritty trio of hard-working, Chicago-based carousers. Allison and his many bands have gone thru a huge number of changes since then, and his current unit consists of second guitar, Fender bass, Hammond B-3 organ, tenor sax and drums. These six guys can generate an awesomely big sound, but I would describe the net results as closer to rock and roll than to blues.

The show opened with a jazzy instrumental, sans Luther, with the band switching from a nice jazz walk to a funky blues figure. Then Luther made his appearance and ran thru half a dozen blues standards, including "Everyday 1 Have The Blues," "I Can't Quit You," "How Many More Times" , and some others. The treatments ranged from perfunctory to bombastic, falling into a blues groove only a few times.

Allison is better than ever at his guitar playing and singing, but he still hasn't come up with what I would call a swingingly authentic blues band, a problem that has dogged him for years. Maybe things were different by the second set and Allison and company settled into a better groove, but I think Luther could do much better. He is one of the finest singers of the blues alive these days, and his guitar playing is sweet and ferocious-a dramatic, show-stopping combination. But it was mostly buried by walls of loud rock and roll.

Over at the Blind Pig that same night another, less-known bluesman made a rare appearance, backed by Ann Arbor's own Silvertones. Guitarist and singer Fenton Robinson did a weekend of extremely solid blues. The Pig naturally lends itself to informality, jam sessions, hanging out; and the set I caught was just like that: plenty of energy, lots of interaction between Fenton and the Tones, and a mellow, bluesy feeling all around.

Fenton Robinson is no youngster, and has probably seen many trends come and go, but his style is so him and so utterly without flash or jive that you know it is the real thing, even when he sings something like the Motown hit "My Girl" in the middle of a set that includes "Got My Mojo Workin' " and "How Blue Can You Get." And I must compliment the Silvertones -they're so authentic stylistically, such a tight cookin' unit! Any band that could play Chuck Berry tunes and not come off as a nostalgia trip is tops in my book. And Steve Nardella just keeps getting better at harp and guitar.

For sure, there were little mistakes thruout the set I saw, but it was all such fun on the bandstand and around the basement that none of that technical stuff mattered. It was a swell blues session, the likes of which I hadn't seen in awhile. The Blind Pig has just recently started booking out-of-town blues names again, and they are to be encouraged in this endeavor. It helped them get famous in town 4 years ago, and I do hope they will continue. Also, the new ventilation downstairs is a godsend.