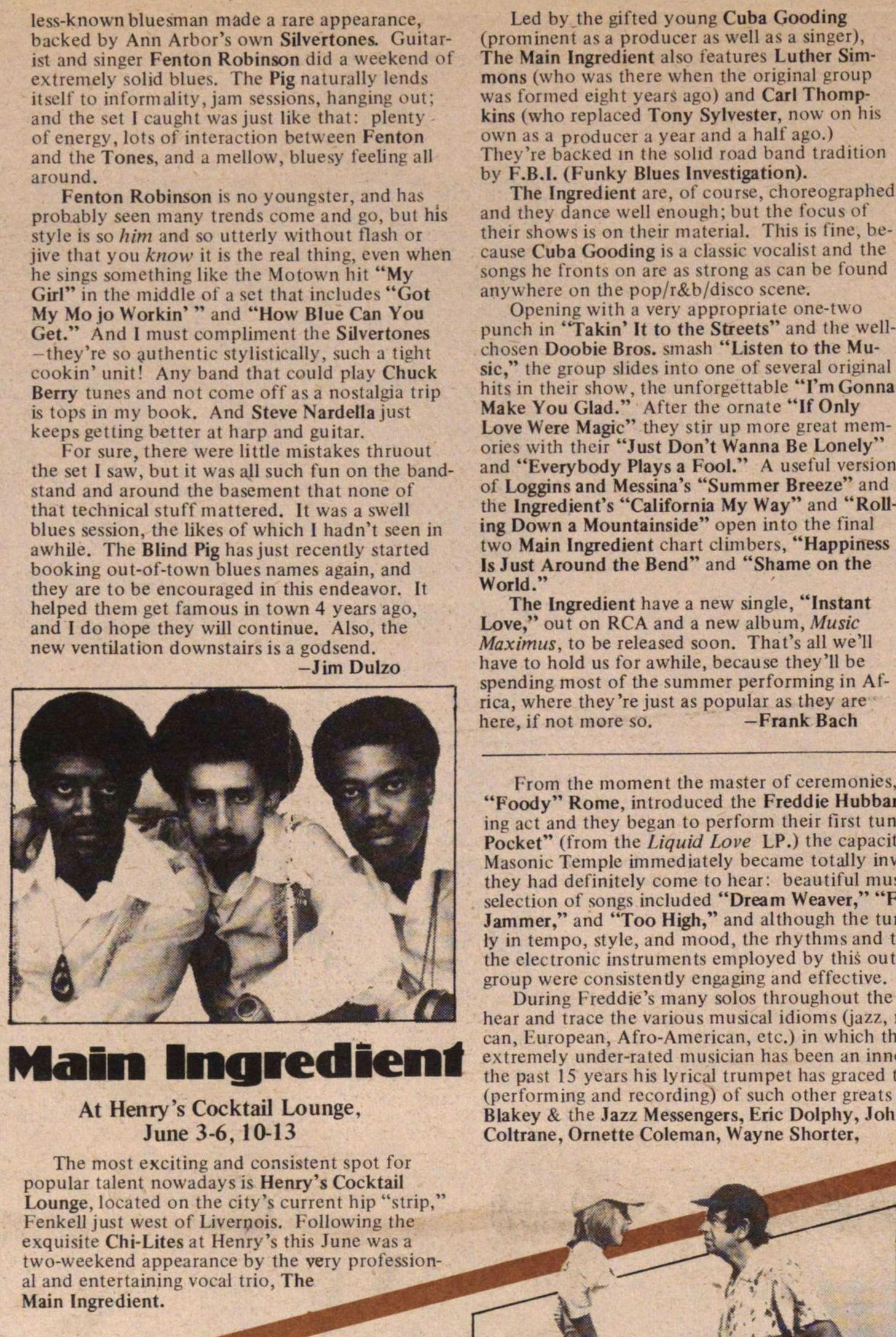 The most exciting and consistent spot for popular talent nowadays is Henry's Cocktail Lounge, located on the city's current hip "strip," Fenkell just west of Livernois. Following the exquisite Chi-Lites at Henry's this June was a two-weekend appearance by the very professional and entertaining vocal trio, The Main Ingredient.

Led by the gifted young Cuba Gooding (prominent as a producer as well as a singer), The Main Ingredient also features Luther Simmons (who was there when the original group was formed eight years ago) and Carl Thompkins (who replaced Tony Sylvester, now on his own as a producer a year and a half ago.) They're backed in the solid road band tradition by F.B.I. (Funky Blues Investigation).

The Ingredient are, of course, choreographed and they dance well enough; but the focus of their shows is on their material. This is fine, because Cuba Gooding is a classic vocalist and the songs he fronts on are as strong as can be found anywhere on the pop/r&b/disco scene.

Opening with a very appropriate one-two punch in "Takin' It to the Streets" and the well chosen Doobie Bros. smash "Listen to the Music," the group slides into one of several original hits in their show, the unforgettable 'I'm Gonna Make You Glad." After the ornate "If Only Love Were Magic" they stir up more great memories with their "Just Don't Wanna Be Lonely" and "Everybody Plays a Fool." A useful version of Loggins and Messina's "Summer Breeze" and the Ingredient's "California My Way" and "Rolling Down a Mountainside" open into the final two Main Ingredient chart climbers, "Happiness Is Just Around the Bend" and "Shame on the World."

The Ingredient have a new single, "Instant Love," out on RCA and a new album, Music Maximus, to be released soon. That's all we'll have to hold us for awhile, because they'll be spending most of the summer performing in Africa, where they're just as popular as they are here, if not more so.