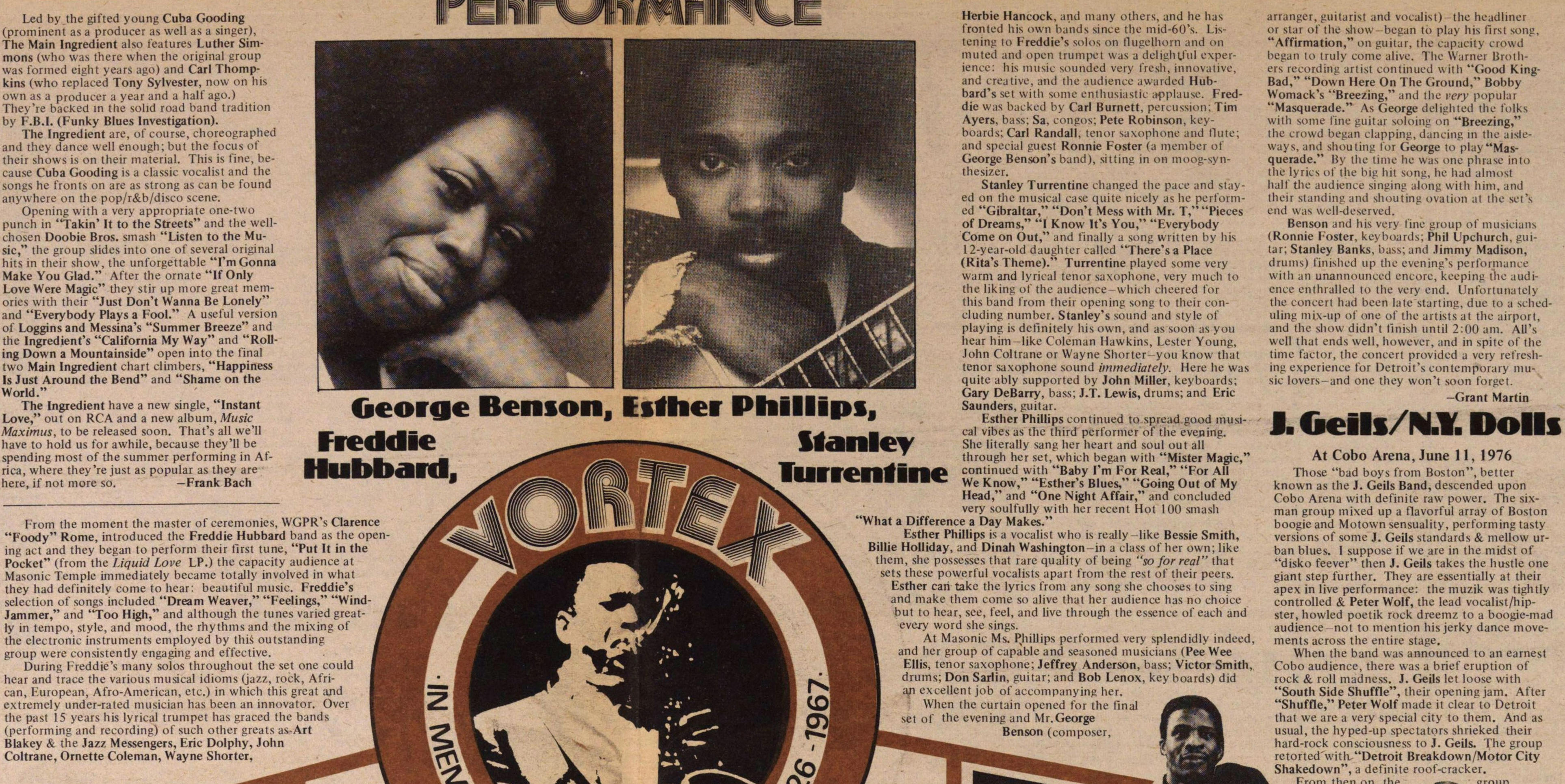 From the moment the master of ceremonies, WGPR's Clarence "Foody" Rome, introduced the Freddie Hubbard band as the opening act and they began to perform their first tune, "Put It in the Pocket" (from the Liquid Love LP.) the capacity audience at Masonic Temple immediately became totally involved in what they had definitely come to hear: beautiful music. Freddie's selection of songs included "Dream Weaver," "Feelings," "Wind Jammer," and "Too High," and although the tunes varied greatly in tempo, style, and mood, the rhythms and the mixing of the electronic instruments employed by this outstanding group were consistently engaging and effective.

During Freddie's many solos throughout the set one could hear and trace the various musical idioms (jazz, rock, African, European, Afro-American, etc.) in which this great and extremely under-rated musician has been an innovator. Over the past 15 years his lyrical trumpet has graced the bands (performing and recording) of such other greats as-Art Blakey & the Jazz Messengers, Eric Dolphy, John Coltrane, Ornette Coleman, Wayne Shorter, Herbie Hancock, and many others, and he has fronted his own bands since the mid-60's. Listening to Freddie's solos on flugelhorn and on muted and open trumpet was a delightful experience: his music sounded very fresh, innovative, and creative, and the audience awarded Hubbard's set with some eathusiastlc applause. Freddie was backed by Carl Burnett, percussion; Tim Ayers, bass; Sa, congos; Pete Robinson, keyboards; Carl Randall, tenor saxophone and flute; and special guest Ronnie Foster (a member of George Benson's band), sitting in on moog-synthesizer.

Stanley Turrentine changed the pace and stayed on the musical case quite nicely as he performed "Gibraltar," "Don't Mess with Mr. T,""Pieces of Dreams," "I Know It's You," "Everybody Come on Out," and finally a song written by his 12-year-old daughter called "There's a Place (Rita's Theme)." Turrentine played some very warm and lyrical tenor saxophone, very much to the liking of the audience which cheered for this band from their opening song to their concluding number. Stanley's sound and style of playing is definitely his own, and as soon as you hear him - like Coleman Hawkins, Lester Young, John Coltrane or Wayne Shorter you know that tenor saxophone sound immediately. Here he was quite ably supported by John Miller, keyboards; Gary DeBarry, bass; J.T. Lewis, drums; and Eric Saunders, guitar.

Esther Phillips continued to spread good musical vibes as the third performer of the evening. She literally sang her heart and soul out all through her set, which began with "Mister Magie," continued with "Baby l'm For Real," "For All We Know," "Esther's Blues," "Going Out of My Head" "One Night Affair" and concluded very soulfully with her recent Hot 100 smash "What a Difference a Day Makes."

Esther Phillips is a vocalist who is like Bessie Smith, Billie Holliday, and Dinah Washington - in a class of her own; like them, she possesses that rare quality of being "so for real" that sets these powerful vocalists apart from the rest of their peers. Esther can take the lyrics from any song she chooses to sing and make them come so alive that her audience has no choice but to hear, see, feel, and live through the essence of each and every word she sings.

When the curtain opened tor the final set of the evening and Mr.George Benson (composer, arranger, guitar and vocalist) the headliner or star of the show began to play his first song, "Affirmation," on guitar, the capacity crowd began to truly come alive. The Warner Brothers recording artist continued with "Good King Bad," "Down Here On The Ground," Bobby Woniack's "Breezing," and the very popular "Masquerade." As George delighted the folks with some fine guitar soloing on "Breezing," the crowd begin clapping, dancing in the aisleways, and shouting for George to play "Masquerade." By the time he was one phrase into the lyrics of the big hit song, he had almost half the audience singing along with him, and their standing and shouting ovation at the set's end was well-deserved.

Benson and his very line group of musicians (Ronnie Foster, keyboards; Phil Upchurch, guitar; Stanley Banks, bass; and Jimmy Madison, drums) finished up the evening's performance with an unannounced encore, keeping the audience enthralled to the very end. Unfortunately the concert had been late starting, due to a scheduling mix-up of one of the artists at the airport, and the show didn't finish until 2:00 am. All's well that ends well, however, and in spite of the time factor, the concert provided a very refreshing experience for Detroit contemporary music lovers - and one they won't soon forget.