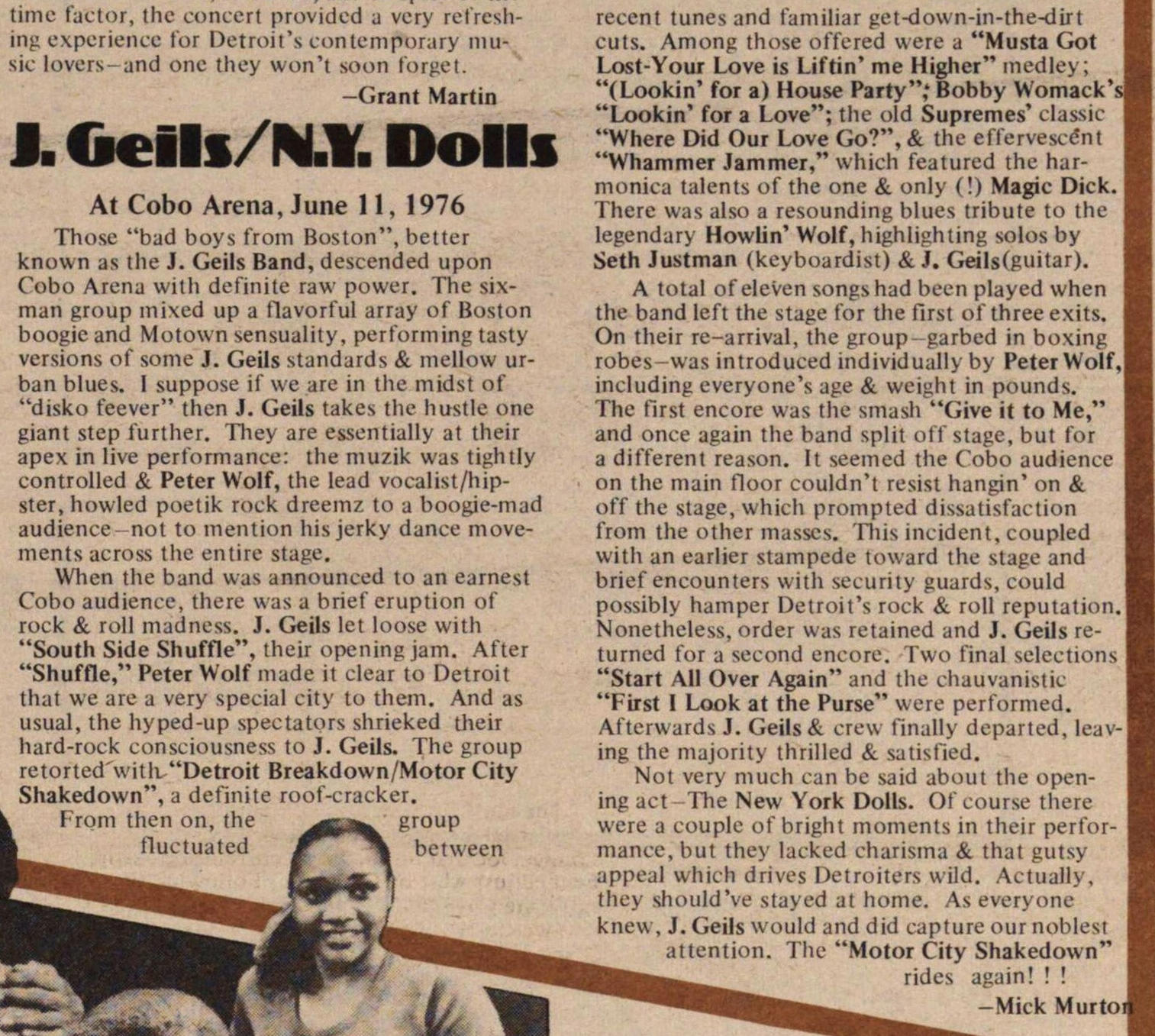 Those "bad boys from Boston", better known as the J. Geils Band, descended upon Cobo Arena with definite raw power. The six-man group mixed up a flavorful array of Boston boogie and Motown sensuality, performing tasty versions of some J. Geils standards & mellow urban blues. I suppose if we are in the midst of "disko feever" then J. Geils takes the hustle one giant step further. They are essentially at their apex in live performance: the muzik was tightly controlled & Peter Wolf, the lead vocalist/hipster, howled poetik rock dreemz to a boogie-mad audience - not to mention his jerky dance movements across the entire stage.

When the band was announccd to an earnest Cobo audience, there was a brief eruption of rock & roll madness. J. Geils let loose with "South Side Shuffle", their opening jam. After "Shuffle," Peter Wolf made it clear to Detroit that we are a very special city to them. And as usual, the hyped-up spectators shrieked their hard-rock consciousness to J. Geils. The group retorted with "Detroit Breakdown Motor City Shakedown", a definite roof-cracker.

From then on, the group fluctuated between recent tunes and familiar get-down-in-the-dirt cuts. Among those offered weie a "Musta Got Lost-Your Love is Liftin' me Higher" medley; "(Lookin' for a) House Party"; Bobby Womack's "Lookin' for a Love"; the old Supremes' classic "Where Did Our Love Go?", & the effervescent "Whammer Jammer," which featured the harmonica talents of the one & only (!) Magie Dick. There was also a resounding blues tribute to the legendary Howlin' Wolf, highlighting solos by Seth Justman (keyboardist) & J. Geils (guitar).

A total of eleven songs had been played when the band left the stage for the first of three exits. On their re-arrival, the group garbed in boxing robes-was introduced individually by Peter Wolf including everyone's age & weight in pounds. The first encore was the smash "Give it to Me," and once again the band split off stage, but for a different reason. It seemed the Cobo audience on the main floor couldn't resist hangin' on & off the stage, which prompted dissatisfaction from the other masses. This incident, coupled with an earlier stampede toward the stage and brief encounters with security guards, could possibly hamper Detroit's rock & roll reputation. Nonetheless, order was retained and J. Geils  returned for a second encore. Two final selections, "Start All Over Again" and the chauvanistic "First I Look at the Purse" were performed. Afterwards J. Geils & crew finally departed, leaving the majority thrilled & satisfied.

Not very much can be said about the opening act  - The New York Dolls. Of course there were a couple of bright moments in their performance, but they lacked charisma & that gutsy appeal which drives Detroiters wild. Actually, they should've stayed at home. As everyone knew , J. Geils would and did capture our noblest attention. The "Motor City Shakedown" rides again! ! !