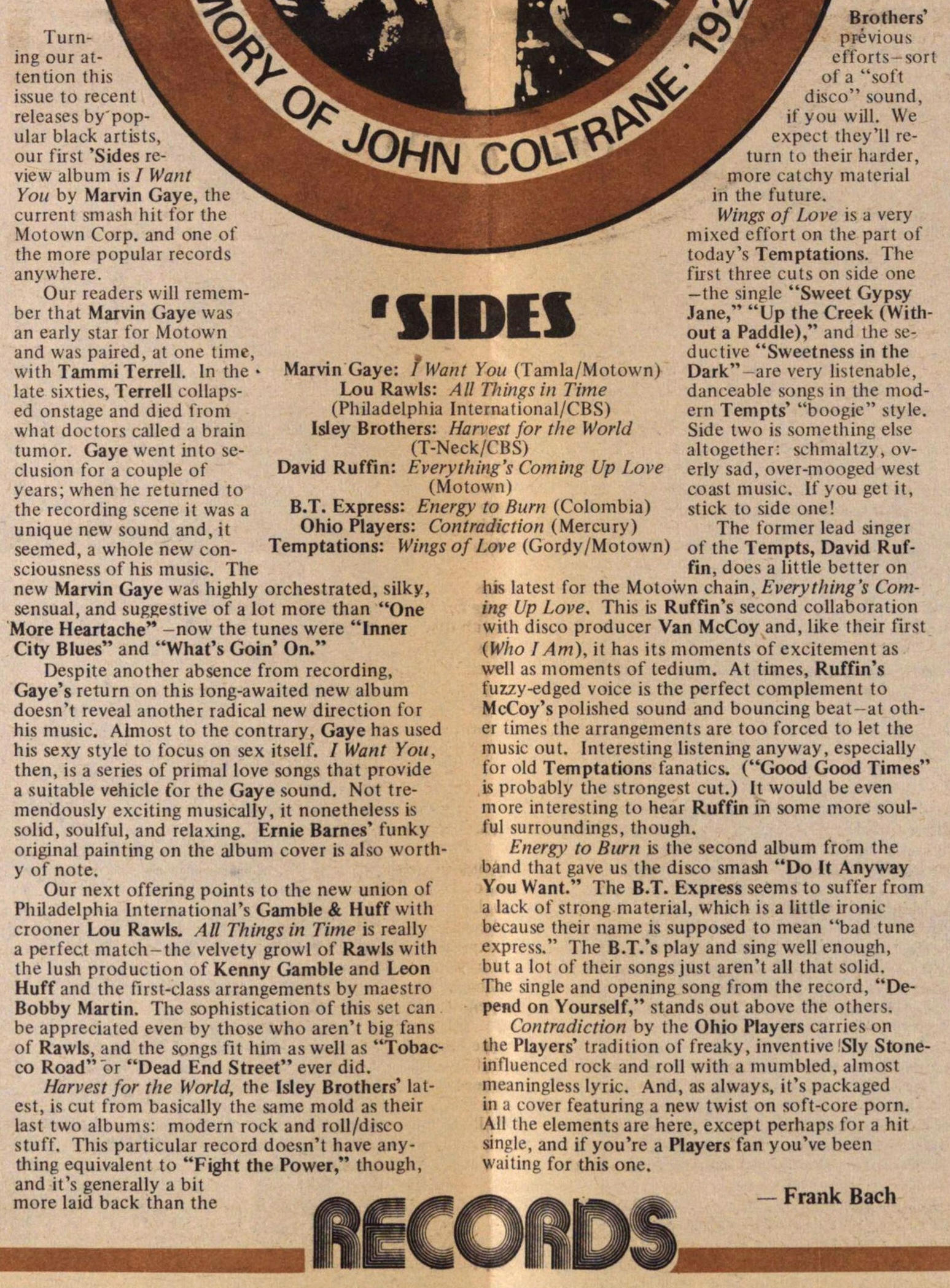 Marvin Gaye: I Want You (Tamla/Motown)

Turning our attention this issue to recent releases by popular black artists, our first 'Sides review album is I Want You by Marvin Gaye, the current smash hit for the Motown Corp. and one of the more popular records anywhere.

Our readers will remembcr that Marvin Gaye was an early star for Motown and was paired, at one time, with Tammi Terrell. In the late sixties, Terrell collapsed onstage and died from what doctors called a brain tumor. Gaye went into seclusion for a couple of years; when he returned to the recording scene it was a unique new sound and, it seemed, a whole new consciousness of his music. The new Marvin Gaye was highly orchestrated, silky, sensual, and suggestive of a lot more than "One More Heartache - now the tunes were "Inner City Blues" and "What's Goin' On."

Despite another absence from recording, Gaye's return on this long-awaited new album doesn't reveal another radical new direction tor his music. Almost to the contrary, Gaye has used his sexy style to focus on sex itself. Want You, then, is a series of primal love songs that provide a suitable vehicle for the Gaye sound. Not tremendously exciting musically, it nonetheless is solid, soulful, and relaxing. Ernie Barnes funky original painting on the album cover is also worthy of note.

Our next offering points to the new union of Philadelphia International's Gamble & Huff with crooner Lou Rawls. All Things in Time is really a perfect match-the velvety growl of Rawls with the lush production of Kenny Gamble and Leon Huff and the first-class arrangements by maestro Bobby Martin. The sophistication of this set can be appreciated even by those who aren't big fans of Rawls, and the songs fit him as well as "Tobacco Road" or "Dead End Street" ever did.

Harvest for the World, the Isley Brothers' latest, is cut from basically the same mold as their last two albums: modern rock and roll/disco stuff. This particular record doesn't have anything equivalent to "Fight the Power," though, and it s generally a bit more laid back than the Brothers' previous efforts-sort of a "soft disco" sound, if you will. We expect they'll return to their harder, more catchy material in the future.

Wings of Love is a very mixed effort on the part of today's Temptations. The first three cuts on side one - the single "Sweet Gypsy Jane," "Up the Creek (Without a Paddle)," and the seductive "Sweetness in the Dark" - are very lislenable, danceable songs in the modern Tempts' "boogie" style. Side two is something else altogether: schmallzy, overly sad, over-mooged west coast music. If you get it, stick to side one!

The former lead singer of the Tempts, David Ruffin, does a little better on his latest for the Motown chain, Everything's Coming Up Love. This is Ruffin's second collaboration wilh disco producer Van McCoy and, like their first (Who I Am), it has its moments of excitement as well as moments of tedium. At times, Ruffin's fuzzy-edged voice is the perfect complement to McCoy's polished sound and bouncing beat-at other times the arrangements are too forced to let the music out. Interesting listening anyway, especially for old Temptations fanatics. ("Good Good Times" is probably the strongest cut.) It would be even more interesting to hear Ruffin in some more soulful surroundings, though.

Energy to Burn is the second album from the band that gave us the disco smash "Do It Anyway You Want." The B.T. Express seems to suffer from a lack of strong material, which is a little ironic because their name is supposed to mean "bad tune express." The B.T.'s play and sing well enough, but a lot of their songs just aren't all that solid. The single and opening song from the record, "Depend on Yourself," stands out above the others.