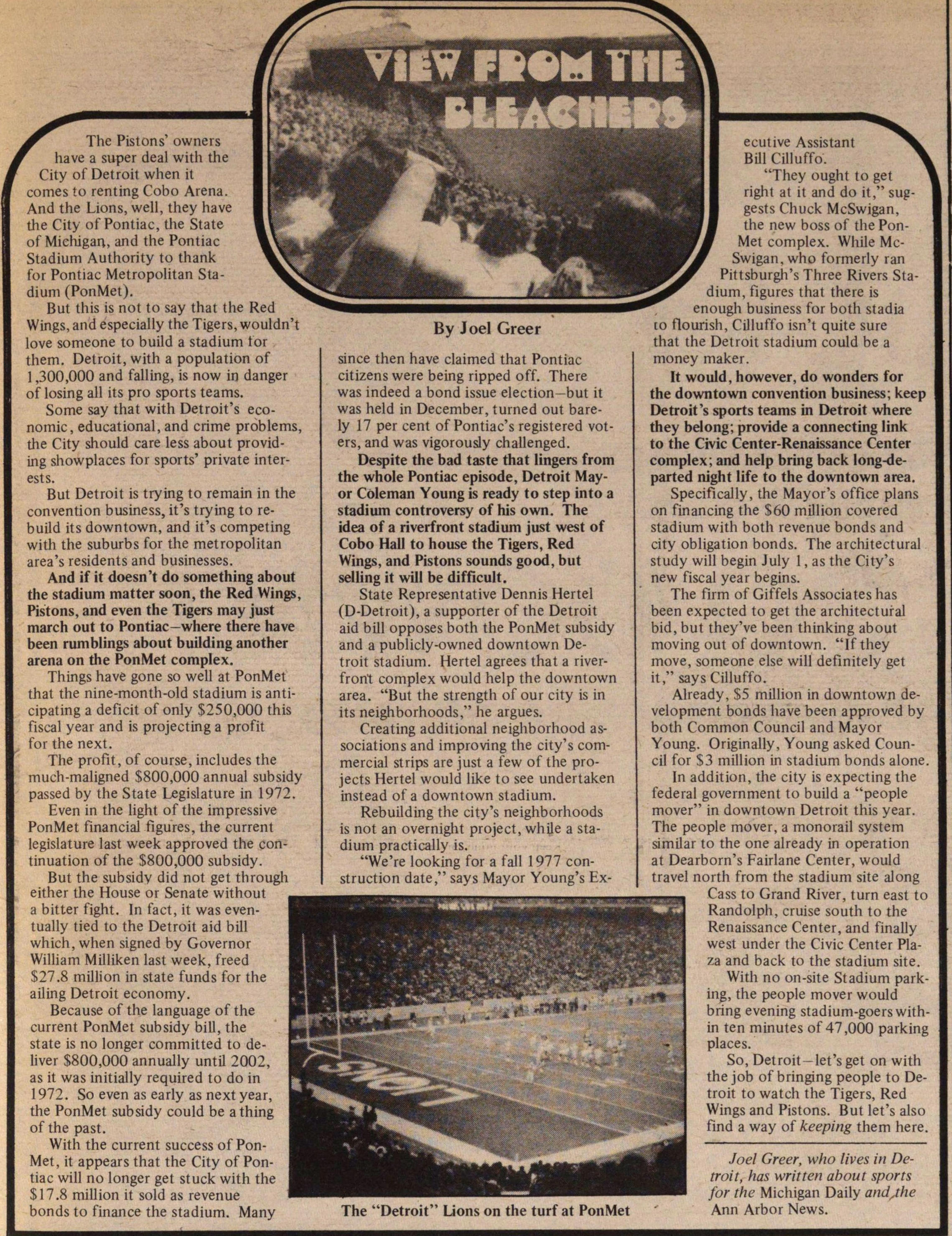 VIEW FROM THE BLEACHERS

The Pistons' owners have a super deal with the City of Detroit when it comes to renting Cobo Arena. And the Lions, well, they have the City of Pontiac, the State of Michigan, and the Pontiac Stadium Authority to thank for Pontiac Metropolitan Stadium (PonMet).

But this is not to say that the Red Wings, and especially the Tigers, wouldn't love someone to build a stadium tor them. Detroit, with a population of 1,300,000 and falling, is now in danger of losing all its pro sports teams.

Some say that with Detroit's economic, educational, and crime problems, the City should care less about providing showplaces for sports' private interests.

But Detroit is trying to remain in the convention business, it's trying to rebuild its downtown, and it's competing with the suburbs for the metropolitan area's residents and businesses.

And if it doesn't do something about the stadium matter soon, the Red Wings, Pistons, and even the Tigers may just march out to Pontiac -- where there have been rumblings about building another arena on the PonMet complex.

Things have gone so well at PonMet that the nine-month-old stadium is anticipating a deficit of only $250,000 this fiscal year and is projecting a profit for the next.

The profit, of course, includes the much-maligned $800,000 annual subsidy passed by the State Legislature in 1972.

Even in the light of the impressive PonMet financial figures, the current legislature last week approved the continuation of the $800,000 subsidy.

But the subsidy did not get through either the House or Senate without a bitter fight. In fact, it was eventually tied to the Detroit aid bill which, when signed by Governor William Milliken last week, freed $27.8 million in state funds for the ailing Detroit economy.

Because of the language of the current PonMet subsidy bill, the state is no longer committed to deliver $800,000 annually until 2002, as it was initially required to do in 1972. So even as early as next year, the PonMet subsidy could be a thing of the past.

With the current success of PonMet, it appears that the City of Pontiac will no longer get stuck with the $17.8 million it sold as revenue bonds to finance the stadium. Many since then have claimed that Pontiac citizens were being ripped off. There was indeed a bond issue election -- but it was held in December, turned out barely 17 per cent of Pontiac's registered voters, and was vigorously challenged.

Despite the bad taste that lingers from the whole Pontiac episode, Detroit Mayor Coleman Young is ready to step into a stadium controversy of his own. The idea of a riverfront stadium just west of Cobo Hall to house the Tigers, Red Wings, and Pistons sounds good, but selling it will be difficult.

State Representative Dennis Hertel (D-Detroit), a supporter of the Detroit aid bill opposes both the PonMet subsidy and a publicly-owned downtown Detroit stadium. Hertel agrees that a riverfront complex would help the downtown area. "But the strength of our city is in its neighborhoods," he argues.

Creating additional neighborhood associations and improving the city's commercial strips are just a few of the projects Hertel would like to see undertaken instead of a downtown stadium.

Rebuilding the city's neighborhoods is not an overnight project, while a stadium practically is.

"They ought to get right at it and do it," suggests Chuck McSwigan, the new boss of the PonMet complex. While McSwigan, who formerly ran Pittsburgh's Three Rivers Stadium, figures that there is enough business for both stadia to flourish, Cilluffo isn't quite sure that the Detroit stadium could be a money maker.

It would, however, do wonders for the downtown convention business; keep Detroit 's sports teams in Detroit where they belong; provide a connecting link to the Civic Center-Renaissance Center complex; and help bring back long-departed night life to the downtown area.

Specifically, the Mayor's office plans on financing the $60 million covered stadium with both revenue bonds and city obligation bonds. The architectural study will begin July 1, as the City's new fiscal year begins.

The firm of Giffels Associates has been expected to get the architectural bid, but they've been thinking about moving out of downtown. "If they move, someone else will definitely get it," says Cilluffo.

Already, $5 million in downtown development bonds have been approved by both Common Council and Mayor Young. Originally, Young asked Council for $3 million in stadium bonds alone.

In addition, the city is expecting the federal government to build a "people mover" in downtown Detroit this year. The people mover, a monorail system similar to the one already in operation at Dearborn's Fairlane Center, would travel north from the stadium site along Cass to Grand River, turn east to Randolph, cruise south to the Renaissance Center, and finally west under the Civic Center Plaza and back to the stadium site.

With no on-site Stadium parking, the people mover would bring evening stadium-goers within ten minutes of 47,000 parking places.

So, Detroit -- let's get on with the job of bringing people to Detroit to watch the Tigers, Red Wings and Pistons. But let's also find a way of keeping them here.

Photo caption: The "Detroit" Lions on the turf at PonMet.