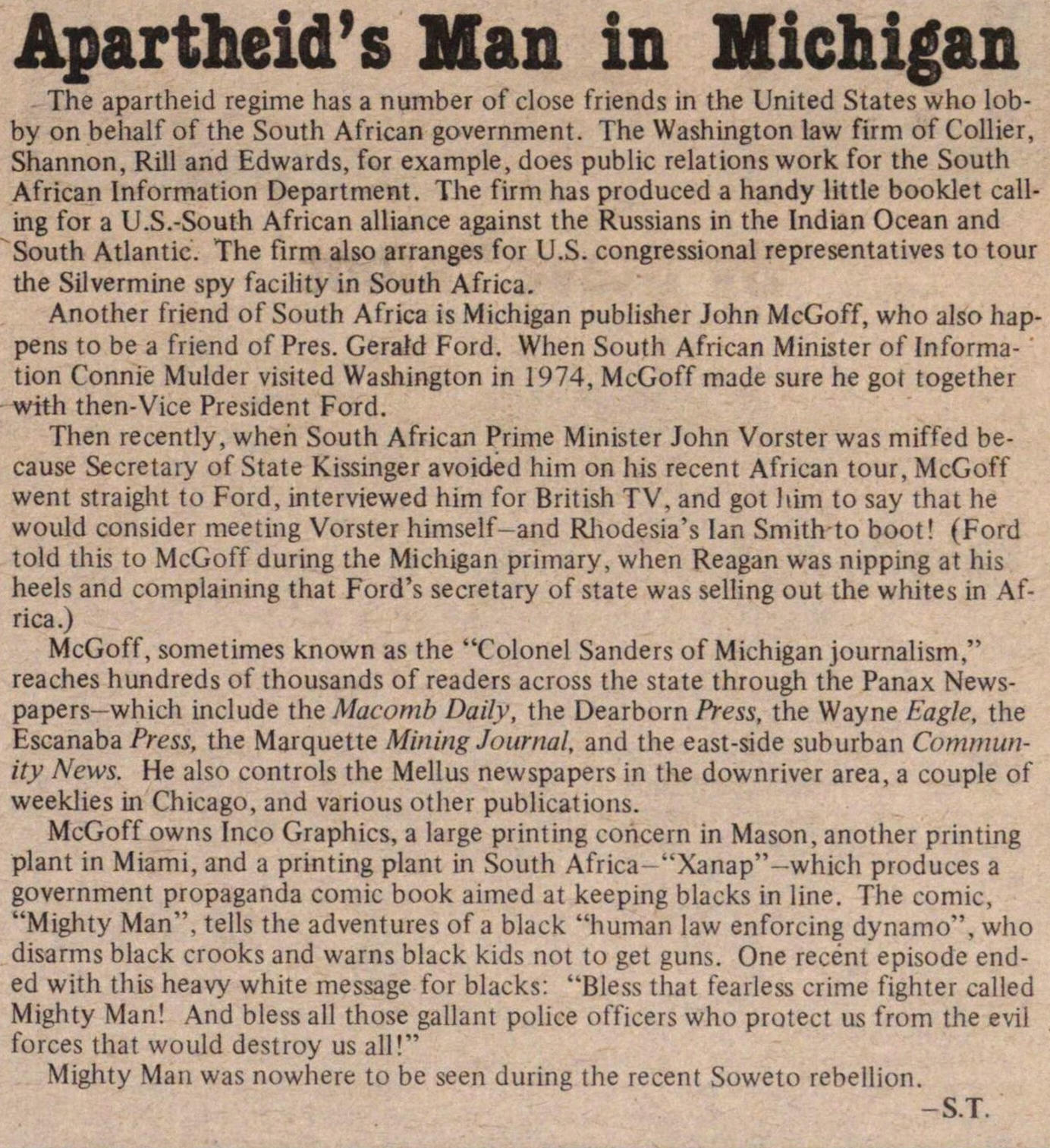 The apartheid regime has a number of close friends in the United States who lobby on behalf of the South African government. The Washington law firm of Collier, Shannon, Rill and Edwards, for example, does public relations work for the South African Information Department. The firm has produced a handy little booklet calling for a U.S.-South African alliance against the Russians in the Indian Ocean and South Atlantic. The firm also arranges for U.S. congressional representatives to tour the Silvermine spy facility in South Africa.

Another friend of South Africa is Michigan publisher John McGoff, who also happens to be a friend of Pres. Gerald Ford. When South African Minister of Information Connie Mulder visited Washington in 1974, McGoff made sure he got together with then-Vice President Ford.

Then recently, when South African Prime Minister John Vorster was miffed because Secretary of State Kissinger avoided him on his recent African tour, McGoff went straight to Ford, interviewed him for British TV, and got him to say that he would consider meeting Vorster himself - and Rhodesia's Ian Smith to boot! (Ford told this to McGoff during the Michigan primary, when Reagan was nipping at his heels and complaining that Ford's secretary of state was selling out the whites in Africa.)

McGoff, sometimes known as the "Colonel Sanders of Michigan journalism," reaches hundreds of thousands of readers across the state through the Panax Newspapers - which include the Macomb Daily, the Dearborn Press, the Wayne Eagle, the Escanaba Press, the Marquette Mining Journal, and the east-side suburban Community News. He also controls the Mellus newspapers in the downriver area, a couple of weeklies in Chicago, and various other publications.

McGoff owns Inco Graphics, a large printing concern in Mason, another printing plant in Miami, and a printing plant in South Africa - "Xanap"-which produces a government propaganda comic book aimed at keeping blacks in line. The comic, "Mighty Man", tells the adventures of a black "human law enforcing dynamo", who disarms black crooks and warns black kids not to get guns. One recent episode ended with this heavy white message for blacks: "Bless that fearless crime fighter called Mighty Man! And bless all those gallant police officers who protect us from the evil forces that would destroy us all!" Mighty Man was nowhere to be seen during the recent Soweto rebellion.